Pavel Tonkaev started his Master’s at ITMO University in 2017 after graduating from Peter the Great St. Petersburg Polytechnic University (SPbPU). Since his second year here, Pavel has been studying perovskite materials in nanophotonics and optoelectronics. Current studies suggest that these materials may not only become the future of solar energy but also set the stage for various other technologies, from the creation of sensitive photodetectors to the study of living cells. In this article, Pavel talks about how to get into research in the second year of your Bachelor's, how his discoveries can help people in the future, and why scientists shouldn’t stick to one perspective. 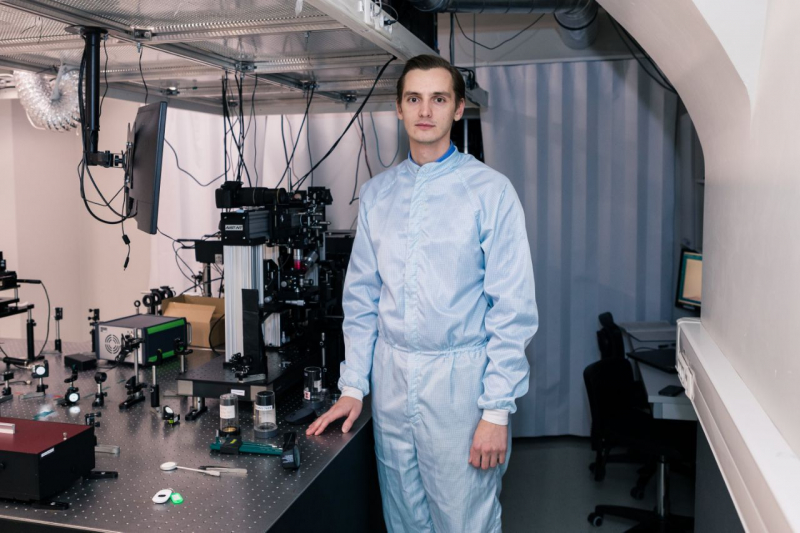 I studied experimental physics at SPbPU where I received a high-quality fundamental education in the field of condensed matter physics. Nevertheless, I had to look for another university for my Master’s because the program I liked was canceled due to insufficient enrollment.

As a Bachelor’s student, I was engaged in research at the Ioffe Institute of the Russian Academy of Sciences. Towards the end of my studies, my supervisor learned from Mikhail Limonov that the institute plans to launch a new joint Master’s program in photonics of dielectrics and semiconductors with ITMO University. I knew the program was going to be great so I grew interested in it.

Why did you decide to continue with your PhD studies here?

No other university in St. Petersburg has such an atmosphere and academic opportunities. For instance, at ITMO students can work with top equipment. That’s cool even if you do have to book your lab time a month in advance.

The university’s scientists are mostly young specialists with publications in peer-reviewed journals and extensive expertise in their fields. At the same time, they have a deep passion for science and strive to think about how their findings can be useful for future generations, too. Plus, it’s easier to get along with younger colleagues, including supervisors.

How do young specialists manage to gain vast expertise and a reputation despite their age?

Such people are usually hard workers. They constantly have something on their plate. Take Sergey Makarov. He is the head of our laboratory, which specializes in solar cells, LEDs, nanophotonics, photodetectors, etc. And the thing is, Sergey knows his way in all these fields. Even my fellow researchers don’t always know much about their colleagues' fields, not to mention other specializations.

Students often say that they don’t have enough opportunities for their professional growth and feel discriminated against by older professionals. Is it really so?

The truth is that everything depends on the person. I assembled my pilot machine to measure the optical properties of heterostructures when I was only in the second year of my Bachelor’s. Though it wasn’t a breakthrough, it brought me to the International Conference on Mathematical Modeling in Physical Sciences (IC-MSQUARE) in Athens, Greece.

Everywhere I see Bachelor’s, Master’s, and PhD students working side by side on their research projects. At least, this is the case for ITMO’s School of Physics and Engineering. Surely, more experienced students will take on more demanding tasks, while others will get the chance to experiment with their work. This is because younger students need to learn, measure, and see the process with their very eyes, while PhD students are not so interested in “simple” experiments anymore.

Can PhD students receive an enhanced stipend just like Bachelor’s and Master’s?

If you’re a Bachelor’s or Master’s student and you do science, you’re cool. But if you’re a PhD student who does science, you’re no different from your fellows. Instead, PhD students can apply for grants and state scholarship programs. When I first got into my Master’s program at ITMO, I received a good stipend because I had lots of publications. But there is too much competition out there today for PhD students.

And what about other stipends, not for scientific achievements?

Master’s and PhD students now have the ITMO.Mentors program. I’m also one of the university’s mentors. As a mentor, you can help lecturers by taking over part of their responsibilities and reducing their workload and also receive a salary for your work. On top of that, you get to try your hand at teaching and this is a handy skill to master. By teaching others, you deepen your knowledge in the subject, too.

Why did you choose to study perovskite materials?

Since scientists first created perovskite materials in the 2010s, they almost immediately started trying to figure out their use for solar cells. Later on, they also discovered that such materials demonstrate highly efficient luminescence. Such compounds, nevertheless, are often unstable and water-sensitive, so many researchers focus on looking for ways to increase their stability. In the case of solar cells, this can be achieved with the help of a special coating but nanophotonics in general is still in search of new solutions.

How are perovskites used in photonics?

I mainly deal with applied nanophotonics, namely, I’m interested in how resonant structures can be used to enhance light-matter interaction. Potentially, the outcome of my research might find its application in the future when people have more opportunities for controlling light at the nanoscale. Once we do, we will be able to create, for instance, a compact optical computer.

Do you have an ultimate goal in your work?

I don’t think so. I’m currently studying the material from the perspective of nanophotonics but the focus of my research can change anytime, even within one year.

Do you initiate this change?

Not always. Sometimes, scientists have to move on when the studied effect is less than expected or barely noticeable. Also, it may happen when you get involved in other projects. Say, I have certain skills that this or that research project needs, then its team can take me on board. So I will get a new project and a new perspective. But in general, it’s a good thing to change your topic every few years simply to try something new.

How did you find your supervisor?

Usually, supervisors conduct presentations for first-year Master’s students to tell them more about their research groups. But students don’t have to wait for this, they can apply for a lab internship right away and thus show their potential supervisor how qualified and interested they are.

When I was a Bachelor’s student, I picked a supervisor because they were engaged in a highly promising field, as I thought. However, over time, I understood that I wanted to do science at a higher level and changed my research area and my supervisor.

What do you want to do next?

Our lecturers often tell us to try our chances abroad because it’s a great opportunity to learn more about how science works in other countries and find our ideal work environment. After I graduate, I’ll most likely try to join some research project in Europe.