METANANO is the only conference in Russia that focuses on nanophotonics and metamaterials. It is organized by ITMO’s School of Physics and Engineering and the Mediterranean Institute of Fundamental Physics and annually attracts hundreds of researchers from Europe, Asia, the USA, and Russia. Read on to learn what the conference was like this year and how it is different from classic scientific events. 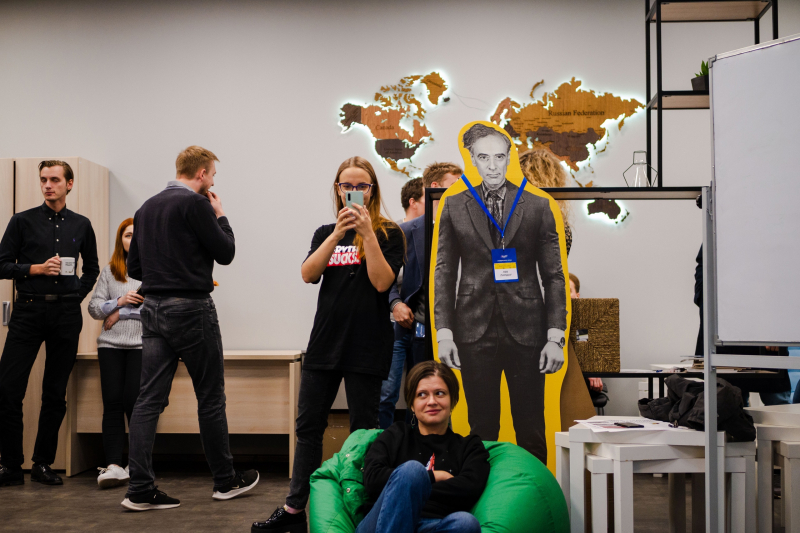 Headquarters of the organizers of METANANO 2021 broadcast. Photo courtesy of ITMO's School of Physics and Engineering

The first METANANO Conference was held in 2014 in Cuba and since 2016 it has been held in Russia – in St. Petersburg, Sochi, and Vladivostok. While the first events brought together around 90 scientists mostly from Russian universities and research centers, last year’s event was attended by 400 participants with over half of them coming from Europe, the USA, and Asia.

In 2021, the conference was supposed to be held in Tbilisi in a hybrid format but was eventually transferred online due to the pandemic. This transition allowed the organizers to increase the number of conference topics and plenary sessions, as well as the number of international participants while still preserving the event’s non-classical atmosphere.

For instance, poster sessions were held in Gather.Town, which is an online platform not unlike games in the JRPG genre, where participants can interact in a more joyful and relaxed format.

Over the years of its existence, METANANO has evolved quite a lot but preserved the key idea at its core – the focus on not only covering the latest research achievements but also on building a friendly community that brings together scientists from all over the world.

To this end, METANANO’s program always features a wide range of social events, such as discussions on topics seemingly unrelated to the scientific agenda. For instance, last year’s program included a round-table discussion on gender diversity in science – as a result, the conference established ethical rules and an equality policy that will help make METANANO more inclusive.

We talked to the organizers of this year’s METANANO and its regular participants to learn how the conference has changed and why it brings together more and more researchers from all over the world.

We organize the largest conference on nanophotonics, metamaterials, and optics – and it has always been like that but we try to make it even bigger by including new research fields into the program. We can almost say that it’s a conference on metamaterials and a little bit on everything else, too, but at the same time we are trying to preserve its original depth.

I think that the conference used to be small and homely earlier but now it’s growing bigger – but still retains its cosy atmosphere. At the same time, our speakers are renowned researchers and even Nobel Prize laureates. For instance, this year the conference was opened by Franco Nori, one of the world’s leading scientists in quantum optics and physics – if we ever develop a quantum computer, it will be largely thanks to his work.

As for the format, we would naturally love to go back offline. Although the current format does have its advantages – for example, this way we can have participants who otherwise would’ve been unable to join us in person.

We offer our participants to organize their own conference sessions, so each year our program features additional topics that are important for particular professional communities. For instance, this year we’ve added a session on mechanically active materials and thermal effects in all-dielectric and plasmonic materials organized by our PhD students, among others. Also, we had our first presentation on robotics.

We treat our participants as members of one big family – we love them and take care of them, and we are guided by these values every year.

At the same time, we are also trying to make our conference a little non-classical. What we mean is that usually people think that a scientific conference is when established grey-haired professors present their research in an oak-decorated lecture hall. METANANO, on the contrary, involves a lot of young researchers and features many activities. We try to preserve this spirit online, too. For instance, we held poster sessions on Gather.Town to promote communication between our participants – and because it’s more fun this way.

Our participants have a great impact on our development. They attend the conference as students, then grow into postdocs, organize their own sessions, and bring delegations of colleagues, students, or their family members. That’s why the number of participants keeps growing.

I took part in METANANO for the first time in 2019 in Sochi, then I came to St. Petersburg, and for the last two years I’ve been joining online.

When I was invited for the first time, I decided to participate because the program featured many people with research projects similar to my own. The conference in Sochi was held at the highest level, with presentations from world-class researchers. Importantly, participants and organizers turned out to be really pleasant to talk to – and this is not something you see at every conference.

Over the last four years, the conference’s program got more diverse in terms of the topics covered. Earlier, it was focused on nanophotonics and now it features nuclear chemistry, spintronics, and quantum physics. These topics are still in the realm of nanophotonics and metamaterials, but I can see that the organizers are expanding this context and introducing more research fields.

It might have to do with the online format because this makes it easier to attract people from different fields, who can organize their own panel sessions and round-table discussions.

Shubnikov Institute of Crystallography of the RAS

METANANO is focused on a field that is actively developing right now. It includes more and more topics, which makes it appealing to researchers. This is evident based on the average age of the participants. Usually in Russian science we see mostly elderly researchers, whereas here most of the participants are under 40. That’s quite unusual.

I took part in this conference even before it grew into what it is now. Back in 2011-2012, there were  Diffraction Days in St. Petersburg, which included a separate workshop on metamaterials. This workshop gradually turned into METANANO.

One of the conference’s strong points is that it has always been organized by world-class researchers, who strive to attract top scientists, candidates for the Nobel Prize, as well as the majority of Russian researchers who work in the field.

I can compare various online conferences because I took part in many of them and this one is very good in terms of participant engagement and intensity. When you join a session on a particular topic, there are about 30-40 people in each room, they all ask questions and are clearly interested in the topic. This year, poster sessions were also organized really great – in the form of an interactive video game. I think this is thanks to everyone who organizes the conference, including students.