ITMO.EduStars Winner Natalia Gorlushkina on Teaching and Friendship With Students

Natalia Gorlushkina comes from a family of professionals in optics: almost all of her relatives studied and worked in this field. She graduated from LIFMO (now ITMO University) and worked at a lab, but then decided to become a lecturer. Having worked for over 30 years in this profession, she taught many generations of students, received several awards, and last year, won ITMO.EduStars. We asked her to share what it was like to change her specialization, how to become friends with students, and why for her, the university feels like home. 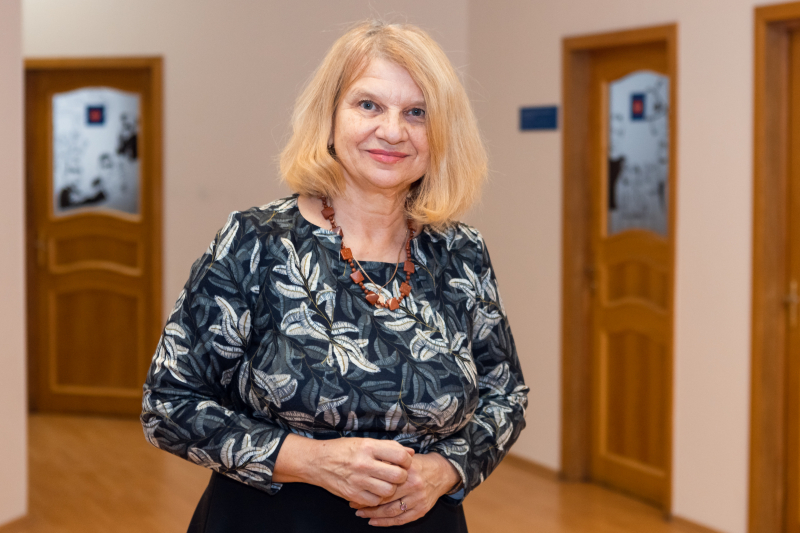 You’ve been teaching for 34 years now. Why did you decide to enter this field?

There are several reasons. I’ve always wanted to be a teacher and even had some experience in this area as a fifth-grader: my school’s headmaster asked me to substitute for a teacher for first-grade students. Later, I was talked out of this idea, as everyone in my family was engaged in optics: my parents designed optical devices, my uncle worked with optical glass, and one of my grandfathers worked on technologies in optical device engineering. So my choice was sort of a given. I graduated from LIFMO and started to work at a lab at the then Department of the Theory of Optical Devices, but I still wanted to teach.

By the time perestroika started, I was a research associate at the Department of Special Optical Devices but I had to get a new job due to the fact that scientific research was no longer funded by the government. I was lucky enough to get hired by one of LIFMO employees, Mikhail Poteev, who later became my research advisor. Thus I started to work as a laboratory assistant at the Faculty of Continuous Professional Training. This position was lower than my previous one but at least I stayed at the university.

During the 1994/95 academic year, employees of the departments of advanced math and physics launched a program for engineers and lecturers at the Faculty of Natural Sciences. The subject area was Professional Education and Computer Technologies and its graduates were supposed to be mathematicians and physicists qualified for lecturing. The launch took place at the same time when the federal educational standards for higher education were established, so there were lots of requirements. Other than lectures in natural sciences, math, and computer technologies, we had to give lots of classes on pedagogy. Plus, I had to substitute for a lecturer, who refused to teach.

Back then, I was really worried because I didn’t have a pedagogical education, so it was hard for me to work with concepts from this field but on the bright side, it was a great experience. Three years later I met one of the graduates who thanked me for lectures on pedagogy in particular. In 1998, when Mikhail Poteev, Natalia Gusarova, and I launched the Department of Intelligent Technologies in Humanities, it was I who became one of the first lecturers there.

What was your most unusual lecturing experience?

There was a funny moment when I was 34 years old: I looked quite young and one day before the lecture, a student walked into the classroom and said “So, there are five of us here already, but the lecturer still isn’t here,” to which I responded that if everyone has arrived, we can start the class. She was quite embarrassed for mistaking me for a student.

Later, when patent law became a compulsory subject in the curriculum, I had to teach it for all students – around 400 of them. Instead of an exam, I made a rookie mistake and asked them to hand in their reports. Moreover, they were mostly handwritten. It was nearly impossible to read 400 handwritten papers that were handed in almost at the same time, so I had to ask my mother for help. Over time, I learned how to read them quickly, identifying mistakes and weak spots.

But one of these papers I won’t ever forget. When I taught pedagogy for PhD students, I even used it as an example. It was 25 pages long and on the fifth page, it had a note: “Do you really read this nonsense?” Then, on the 15th page there was “I didn’t think you’d read this far,” and at the end there was something on how the author feels sorry that I had to waste so much of my time reading this. I didn’t know what to do: the paper itself was fine, but how could I forgive these notes? Eventually, I handed it back to the author in person and said that it’s pretty good, except for the comments left on specific pages, and he apologized to me. My students didn’t believe I actually read their papers but I always do and keep telling them so. I’d never asked to submit 400 papers since that time though, it’s hard both for the students and the lecturer.

What do you enjoy most about teaching?

When you teach a class, you always feel a strong feedback from the students. My close ones note that even when I’m grumpy or tired, I always lighten up when I talk about my students. They’ve always been almost like friends to me. Once I had to move from one apartment to another and didn’t have much money to hire someone to move my stuff, so I asked my students to help, even though I was reluctant to. As a result, 16 people agreed: girls helped me pack and guys put everything in the car. How can I not love them after that? In times of trouble, they helped me. Not for a grade but because they really wanted to.

What advice would you give to young lecturers?

You should love your job and your students, for whom you do your best; don’t be scared to admit you don’t know something, and try to never raise your voice.

There are situations, when you know how to act in theory. For example, I taught a course for PhD students , where we discussed if it’s ok to let in students who are late, how to answer complex and uncomfortable questions, and how to attract the attention of distracted students. But at the end of the class, I warned my students that they won’t act the way we decided was best. But they won’t be afraid of these situations; they’ll act like their hearts and minds tell them to. So I recommend practicing difficult situations and treating students like friends. Don’t be afraid of them.

Moreover, I think students don’t forgive arrogance, even though the lecturer always holds a superior position. Here’s an example: students nowadays don’t get up to say hello to the lecturer when they walk in. In the past, they used to. So at my first lectures, I asked my students to get up, so that they would realize that we’re equals. Then we would greet each other and I would start the class.

I think young lecturers should also look for their own signature moves. For example, our graduate, now lecturer at the Faculty of Infocommunication Technologies, Artem Beresnev, really knows his audience and has a high level of empathy, which helps him suit the needs of others. So he doesn’t have a single “bad” student. His sense of humor is also of help – he’s able to add a funny story to the discussion of a complex subject.

You’ve worked at ITMO University in various positions over most of your life. Why do you like working here?

It’s hard to answer this question briefly. I’d say, ITMO became a second home for me. By the way, the chair I’m sitting on right now was a gift for my 55th birthday from my graduates. At first they were worried about it standing here, at my workplace, rather than at the apartment, but then they concluded that this is my home, too.

I often say that teaching is addictive. It’s fun to come up with new things and try them out. When it works and the response is positive, it feels great and you really get addicted. During the pandemic and online teaching, I felt the lack of feedback, so I taught first-year students in person, as it was important for me to see and get to know them.

What’s your biggest achievement at ITMO?

Our Department of Intelligent Technologies in Humanities celebrated its 20th birthday on June 3, 2018. Mikhail Poteev and I started to work on it in 1998. In the years 2009-2018 I worked as the head of the department, once he retired. June 3 in 2018 was my personal peak, when everyone thanked me. We held a celebration at the university, and our graduates, students, and lecturers came there, but only I received flowers. On one hand, I was a little embarrassed for getting all the attention, but on the other, I realized that this department is truly my hard-won brainchild. Maybe it’s a little braggy but this date allows me to say so.

In 2000, you received the title of an Honorary Worker of Higher Professional Education of the Russian Federation, in 2007 – the St. Tatiana Badge of Honor, and last year, you won ITMO.EduStars. What is the benefit of such awards for experienced lecturers like you?

The victory in ITMO.EduStars was a pleasant surprise for me. At the award ceremony, I felt like I was the oldest participant. Then I asked one of my graduates why she thinks I was nevertheless chosen as a winner, and she said “Enjoy! This means you’re trendy!” I think any lecturer who loves their job would be glad to win in a competition like this.

I have a house in the countryside, so in spring and summer I plant flowers, vegetables, and berries. I also like to cook and preserve my harvest. Plus, I have two cats – four-year-old Rusya and 18-year-old Filya.

In the last five years, I acquired another hobby – I started writing down the history of my family. When my father died, I realized that I’m the oldest one now and if I don’t do this, no one will. I started with writing a list of all relatives, whom I remembered, and then asked my brothers and sisters for more information on them. I was also asked to write an article about my father, who fought during the Great Patriotic War. For that, I found and organized old family photos. I continued to look for mentions of my relatives; the oldest one yet is about my great-great-grandmother. It’s an interesting thing to do and it really makes you wonder about many different things.