EDfest St. Petersburg is a career guidance festival for school students, which took place from March 28 to April 1 and offered five days of animation workshops, lectures on science, entrepreneurship, and professional development, interactive master classes on holography, as well as free counseling sessions based on cutting-edge brain-computer interfaces. The festival was supported by the Federal Agency for Youth Affairs (Rosmolodezh) and organized by ITMO’s Museum of Optics and ITMO Technopark. 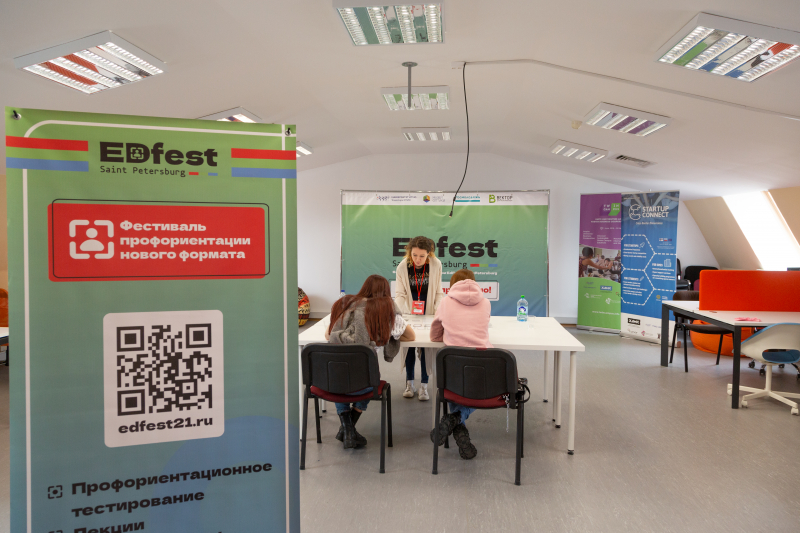 All in all, the festival hosted 19 lectures, 7 workshops, 5 master classes and career activities, not to mention 45 counseling sessions with practicing psychologists from the Vektor Career Guidance Center.

The staff members of ITMO’s Museum of Optics conducted a series of master classes on traditional animation techniques, including that based on zoetropes, phenakistoscopes, modern phonotropes, and scanimation. During practical classes, the festival’s participants got to learn how to create high-performance animations using what they have on their hands, be it paper, vinyl records, or wooden discs.

The event also included workshops prepared by the students and researchers from ITMO’s laboratories during which school students had the chance to assemble their own LEGO Mindstorms robots and get familiar with Arduino robot control boards. The festival attendees took a tour of the university's laboratory of holography where they not only got to see a laser system but also tried their hand at developing holograms using photopolymers - and even took their creations home.

Another section of the festival was devoted exclusively to career activities, namely, games meant to let school students learn more about disappearing jobs, reflect on which skills will be helpful for future professionals, and even help fictional characters create their career paths.

The festival offered an impressive lecture program. The organizers of the event managed to bring together scientists, mentors from ITMO Accelerator, soft skills teachers, and representatives of AIESEC, an international student-run organization, to discuss a multitude of topics. Sergei Stafeev, a professor at ITMO’s Faculty of Physics, introduced the participants to a new science called neuroiconics, which studies imaging processes inside our brain and the associated perception mechanisms. Daniil Sharov, a PhD student at ITMO’s Faculty of Software Engineering and Computer Systems, delivered a talk on artificial intelligence elaborating on real-life use cases in different sectors and the university’s advances in the field.

What's more, the experts educated participants on professional development and job opportunities: Maksim Zaikin, a mentor at ITMO Accelerator, presented a lecture on entrepreneurship and explained what kind of personality traits and skills are essential for a successful entrepreneur, as well as gave valuable advice on how to avoid most common mistakes when starting your own business; the founder of EasyTry Daniil Andreev, in turn, shared his success story with aspiring entrepreneurs.

The staff of the Vektor Career Guidance Center talked about mistakes that students make when choosing their careers, discussed the current trends in the labor market, and held an interactive class to help students gain the tools needed to make well-reasoned decisions. The specialists from ITMO’s Medical, Psychological and Social Assistance Center, as well as soft skill lecturers gave their expert opinion on the topic: Svetlana Smolyaninova spoke about efficient communication and conflict resolution strategies, and Maria Ososkova highlighted the most crucial soft skills for today’s employees. Julia Lutfullina, an admission specialist, presented the university’s core educational programs and answered questions from the audience. All the lectures are available on the event’s official website (in Russian).

The lecture by Sergei Stafeev (in Russian)

The agonies of choice

As noted by the organizers, the festival was a brainchild of a group of students who actively  collaborated with ITMO’s Museum of Optics and started to think about having such a festival a year ago. Their vast experience of working with children, school students and graduates made them realize that today’s youth have a hard time choosing where and what they’d like to study.

“We all agreed that it's a big problem today: the thing is, many applicants don’t really know why they choose this or that program, they don’t exactly understand what they will study, and hence have to switch their majors once they have already started. Eventually what the problem comes down to is how well students understand their own interests and talents, as well career preferences,” explains Elena Bobritskaya, a curator of the festival, the head of ITMO's Center for Technological Entrepreneurship, and a teaching and learning specialist at ITMO’s Museum of Optics. “At first, we were to run this project by ourselves but then many other specialists and speakers liked our idea so much that they decided to join us. As a result, the festival went beyond our museum and expanded locally.”

Although the team received a grant to host the festival from Rosmolodezh last May, they couldn’t go ahead due to the COVID-19 restrictions until recently. And even so, they decided to run most lectures online as it’s more convenient for speakers and participants alike.

The true backbone of the festival was a series of career guidance consultations with psychologists that were attended by 45 students of different ages. Selecting the right career is a question that preoccupies many students, especially if they’re already in high school. One of the festival’s participants, Alexander Mikhailov, a 11th grade student at School No. 344, named consultations as the main reason why he decided to attend the festival.

“At the moment, I’m trying to figure out where I’d like to study. The process isn’t easy so I jump at every opportunity I have and go to all kinds of events. Not so long ago, I attended ITMO’s Open Day. I’m not sure if I’ll be able to get into it but I enjoyed the tasks which were offered here. On the one hand, I’m interested in engineering but I can’t say for sure what my career will be like – I could construct bridges or maybe I will be a journalist. That’s why I wanted to consult a person who didn’t know me and could be objective rather than discuss such choices with my friends,” shares Alexander Mikhailov.

Apart from career consultations, the participants were also offered to take part in a special testing by means of neural interfaces and electronic skin sensors that analyze electrical impulses in the subject’s brain as they take the test and perform particular tasks. The project wouldn’t be possible without the help of Pavel Letyagin, a research engineer at the Laboratory for Interdisciplinary Research of Human Development (St. Petersburg State University) and Pavel Lekshin, a second-year Master’s student at ITMO’s Faculty of Technological Management and Innovations and a staff member at ITMO’s FabLab.

As explained by Artem Mamontov, the lead organizer of the festival and a student at ITMO’s Faculty of Technological Management and Innovations, the experiment is conducted to identify correlations between the results of traditional and neurotesting.

“As part of the event, we were collecting data to find out similar patterns in electrical signals and figure out why these signals alter, thus making it possible to say what a person likes, which types of activities they are drawn to, and what profession would suit them. For now, we’re just testing our theory. We’ll compare the results of both testings and if our technology proves efficient, we will carry on. Perhaps, we’ll purchase additional equipment, encephalographs in particular, so that we could scan not only the front lobe but also other brain regions as well,” explains Artem Mamontov.

When asked about their future plans, the organizers are confident that the event will be held next year, too. Even if it’s not possible to run the festival on the same scale, career consultations will become a common practice.

“Many students thanked us for our work. They were happy to know that they were finally heard and have someone to help them find their niche and make the big life decision. This festival made us realize how important such events are. And even if our next event isn’t that big, we will hold other events for school students where they will have the chance to talk to specialists and ask their questions,” concludes Elena Bobritskaya.