ITMO.START — the Academic Festival for School Students at ITMO University

ITMO University opened its research laboratories and student workshops for school students. The children participated in science shows and learned of the opportunities the university offers. Many decided to join courses at ITMO after the festival. 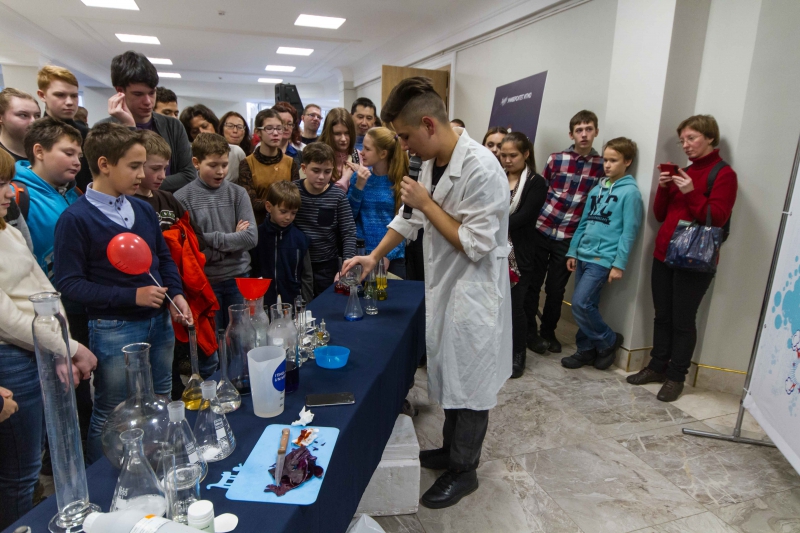 ITMO University has several specialized courses for school students, where they study robotics, programming and physics, as well as train for contests and find their future career paths.

The "Physics-Mathematical Research School" gives its students advanced knowledge in these sciences, as well as gives them an opportunity to put this knowledge into practice. The School aims at training its students for contests and the Unified State Exam. According to the statistics for the last three years, 100% of its graduates successfully joined programs in Physics and Maths, more than 90% got tuition-free positions.

At the "Laser Technology School", highschoolers can work on research projects in the field of photonics and optics. Those can be presented at the All-Russian Congress of Young Scientists which takes place at ITMO every year. Thus, the children can get skills in conducting real research projects while they are still studying in school. "The Academy of Informatics and Programming" gives the fundamentals of programming, algorithms and data structures at a university level. It also trains its students for contests and the Unified State Exam in Informatics. The course is aimed at those most interested in IT. As for those who just started studying it, there is the "Youth Computer Training Center" for children older than nine years old.

Work with hardware and robotics is taught at the "Basic Vocational School of the School of Computer Technologies and Controls". There is also the "Youth Co-Working Center", where school kids can choose their future career by joining courses and participating in master classes in several subjects: the fundamentals of robotics, programming, photography and such. What's more, the children visit museums and learn about other research activities at ITMO University.

The children also learned about the "People Need You!" social project contest, where the students can get skills in management, social entrepreneurship, leadership, promotion and communication.

Those who came to the ITMO.START festival got the chance to learn about joining ITMO and its five Schools, and about the university's goals and achievements. For instance, this autumn ITMO entered the Times Higher Education rankings for the first time, and last week it came 27th in THE BRICS & EE regional rankings.

"ITMO University is open to everyone, we are ready to tell people about what we do. At the workshops, one can work with high end, unique equipment, something you seldom get an opportunity to do. We aim to develop our students, not only from the academic point of view, but their creativity as well. What's more, the students can participate in project activity, launch startups and bring them out to the market", explained Emile Gareev, member of the admission committee. This was the first event for schoolers held at ITMO in this format. The university's faculty believes that interacting with children from their younger years is the best way to attract motivated, talented students who know exactly what fields they are interested in.