On April 8th everyone who cares for Russian language participated in the 14th annual Total Dictation; this year, it united participants from six continents, 71 countries and 866 cities in 19 time belts. 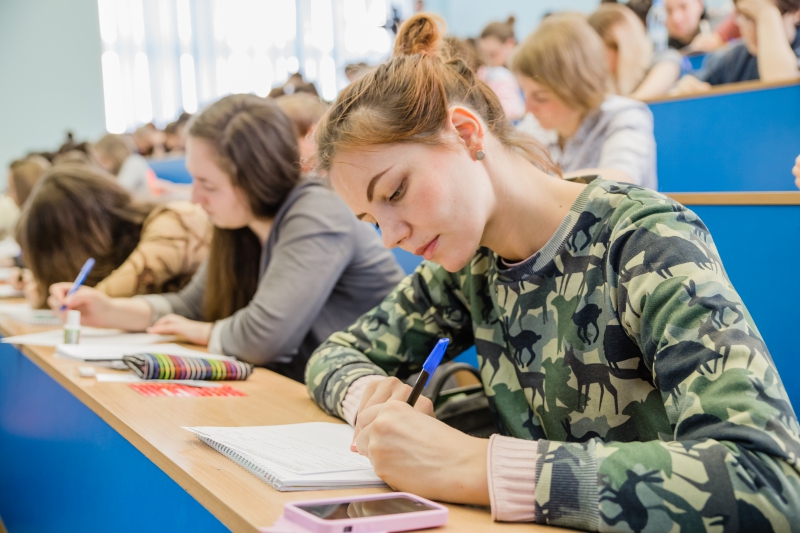 The project's geography grows with each year: this year, the number of participants has increased by more than 50,000 people - about 200,000 people applied for the event this year. As in the previous year, some participated in the Dictation while on the move, above the air - on 10 flights of the S7 airline company, in trains, on ships Kruzenshtern (Kaliningrad) and Pallada (Vladivostok). Members of the Russian Antarctic Expedition participated in the dictation for the fifth time already. Among the novelties of this year's event were corporate sites: in Krasnoyarsk, for instance, several companies organized them for their staff. All in all, there were 3,008 sites where participants tested their knowledge in Russian spelling, punctuation and grammar. One of such sites was ITMO University, which gathered about 300 people for the test.

One of the Total Dictation's distinctive features is that renowned cultural figures take part in the event as
“dictors” [ones who read the text out loud -- Ed.]. This time at ITMO University, those were Billy Novik from Billy'sBand and Ilya Fomintsev, head of the Cancer Surveillance Foundation. "Total Dictation is an event that has to do with promotion of the Russian language tradition. I believe that any language, be it Russian or any other, which is the native or the official language of a country, is an important cultural basis for many processes that define the nature and mentality of its citizens.  As today, the whole modern world, Russia included, strives for innovations and aims to change the reality, not even knowing what for; thus, language is an important conservative basis that represents the other side of a harmonious development of any society, and Russian society as well," shared Billy Novik before the dictation.

This year, the text for the dictation was written by writer Leonid Yuzefovich. The text was about the three cities that played a major role in his life - Perm, where he was born, Ulan-Ude, where he served in the army and lived most of his youth, and St. Petersburg, where he lives now. It is also about three rivers these cities stand on: Kama, Selenga and Neva. According to Leonid Yuzefovich, these three cities represent Russia as a whole. Participants from St. Petersburg were to write the part about Ulan-Ude, and not the their home city, as the media stated before. Thus, they had the chance to learn more of this faraway city. Even before the start of the dictation, its participants started to gather around the lecture halls: school and university students, recent graduates and those who have graduated long ago. Not only humanities-minded people came to this seemingly most non-technical event: many “technicians” also decided to test themselves. Vladimir Vasilyev, ITMO's rector, was also among the event's participants.

Many say that "technicians" study at technical universities partly because they don't want to deal with the basics of linguistics. When asked about why a technical university supports this non-technical event, the Rector does not hesitate to answer:

"I believe that any specialist, no matter, technical or non-technical, scientist or engineer, has to have nonscience training as well, or he would never become a real specialist, won't have the outlook for that. This is not only about Russian language or languages in general. It is also about philosophy, history, psychology - all of that is important. As we are a university that aspires to being competitive on the international level, we should train not some one-sided specialists, but aim to see and predict all the consequences of the possible solutions and products that our graduates can create. They are to be personality-focused.  A person is not just a consumer, it's a lot more difficult: there's faith, soul, love, friendship, responsibility, penance... All of that has to be supported." Prior to the start of the test, the organizers showed the participants a mock news piece; then, participants filled the form sheets and listened to the text by Leonid Yuzefovich. Thus, the dictation started. Many of the participants were seemingly anxious, yet most freely enjoyed the event, as anyone could submit his paper under an alias or even not submit it at all. Still, the organizers promised to check the results thoroughly and strictly.

Many participants came in groups with their friends. For instance, Kirill Deversimenko, one of the event's participants, came with his friends:

“I work as an electronic communications engineer. I've been wanting to participate in the dictation for some time already: last year, and the year before that. This time, I came along with my friends, they invited me. I decided to participate, though, honestly speaking, I didn't prepare for this. Personally, I see this event as entertainment. The dictation was not really hard. I graduated from university a couple years ago, and took the Unified State Exam eight years ago, then my score was 72 - so I got interested in how my knowledge changed: whether it became better with time or worse," shares Kirill. After the dictation, the participants handed in their form sheets, and only the most self-rigorous stayed so as to check their work one more time. Two friends - Galina Bogdanova and Irina Povod - stayed till the end and shared their impressions.

"We work in sales, and participated in the event several times. Last year, we took the dictation at the First Pavlov State Medical University of St. Petersburg. This time, the dictor was fun. The text seemed more difficult than last time, especially the punctuation.  On one hand, this event is fun, on the other - a great way to test one's skills in written Russian," comment the girls.

After the test, the participants had the chance to meet the dictors in an informal setting. "There were difficult parts in the dictation, for instance, the part about the Lenin monument and the bogatyr's head [Russian knight-errant, a reference to Pushkin's Ruslan and Ludmila -- Ed.]. I am good with spelling, but not the punctuation. Internet and messengers utterly kill it.  And, I must say, I wouldn't have written that sentence correctly. Actually, I often speak in public for different reasons: I read lectures, present projects, and do reports at conferences; yet, dictating is most challenging, as you feel the responsibility before those who need to understand you clearly. Also, there are strict regulations on time, but I adapted. The Total Dictation is a unique opportunity to relieve the long-forgotten experiences and a certain kind of fun that allows you to look at yourself from a different perspective." shared Ilya Fomintsev.