At the end of January, Total Dictation hosted the 8th international conference in Moscow, titled “Dynamic processes in contemporary Russian language”. As part of the event, the organizers introduced the author of the text for the 2020 dictation, chose its capital and identified its main theme. Apart from that, volunteers, organizers and experts participated in the discussion on the topic “How popularization in humanities differs from popularization in natural sciences?”, which was moderated by Ilya Stakheev, deputy director of ITMO University’s Center for Science Communication. 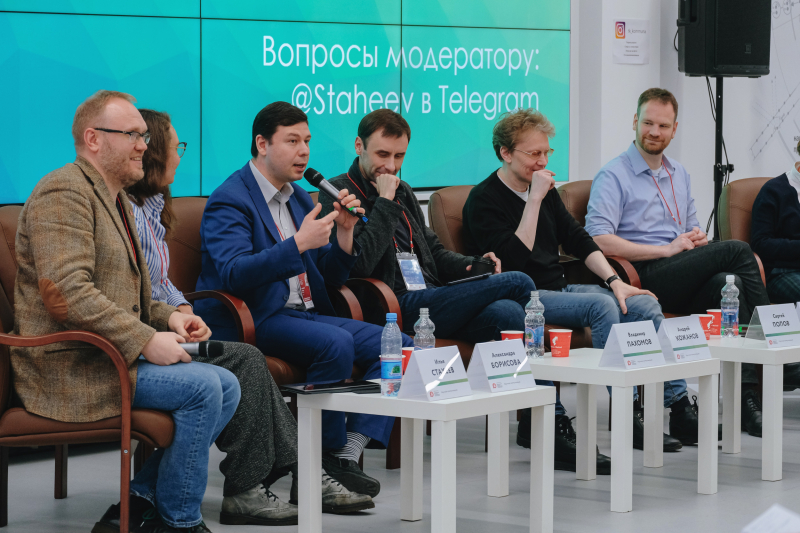 The 2020 Total Dictation: stellar and revolutionary

The 2020 Total Dictation will take place under the main theme of space. It is this that is the focus of Per Aspera, the event’s core text written by Andrey Gelasimov. It’s dedicated to the pioneer of Russian astronautic theory, Konstantin Tsiolkovsky.

St. Petersburg has been chosen as the capital of the 2020 initiative; the city competed for this title alongside Vologda, Kazan, Nukus (Uzbekistan) and Tambov, which also passed onto the finals.

“The Winter Palace will be the main venue. Our plans include projecting the data and time of the dictation on its facade, colored in red. We also want to hold a revolutionary Gramm-parade with philological slogans on the streets of St. Petersburg. Since it’s the cradle of three revolutions, it’s here that we have to organize another, grammatical one,” commented Ilya Stakheev, deputy director of ITMO University’s Center for Science Communication (CSC).

Is the Russian language a science?

The first large-scale Total Dictation conference was held in Moscow thus attracting more participants than it could have in other cities.. During this conference, a special club of the previous texts’ authors was organized, where they discussed problems and trends in the field of Russian language and literature. This initiative resonates with one of the key tasks of Total Dictation: to promote not only the  excellent writing skills, but also high-quality contemporary prose in the Russian language.

Represented by the CSC staff, ITMO University organized an entire section on science communication. Three students of the Science Communication Master’s program volunteered on the day, and assisted at the conference’s press center. For them, this was a unique chance to try their hand at real-life fieldwork.

“We began with a lecture on fact-checking and critique of expertise. In my opinion, these skills are very important in modern media, not only for scientific authors but also for media consumers. Following next was a series of workshops by Uliana Malysheva, who was for a long time the editor of ITMO University’s Russian news website. Uliana spoke about practical cases of interacting with experts, writing scientific articles and press releases, as well as about the specifics of how university media operates,” explained Ilya Stakheev.

Culminating the section was the discussion “How popularization in humanities differs from popularization in natural sciences?”, which allowed the conference participants and experts to identify general and specific problems they face in their work.

“At the beginning of the discussion, I told a story about how Dmitry Malkov, the first director of the CSC, and I wrote an article for a journal of a European scientific events community. There, we talked about the five areas of science communication in Russia, listing Total Dictation as one example of mass events. The international editorial approached us with a question, “Is the Russian language a science?”, because as far as the English language goes, this isn’t exactly the case. But I responded with a detailed answer that firstly, in Russian discourse all sciences are taken as sciences, languages included, and that secondly, the events that are similar to Total Dictation effectively copied its mechanics, and it wouldn’t be fair to list them just because they focus on maths while the very field is based on Russian. And this comment was included by the editor as an important element of the paradigm of what people consider as science and how they perceive it,” shared Alexandra Borisova, analyst at the Center for Science Communication and one of the speakers at the discussion.

It turned out, however, that despite the difference between humanities and natural sciences, they share a lot of common problems in the field of self-promotion. And this is why overcoming these obstacles should also be a joint effort.

“We had a strong pool of speakers such as Andrey Kozhanov from the Higher School of Economics, who also teaches as part of ITMO University’s Science Communication programs; Vladimir Pakhomov, chair of Total Dictation’s expert council, linguist and editor of the Gramota.ru website; Sergey Popov, doctor of physics and maths and an astronomer; Grigory Yudin, professor at the Moscow School for the Social and Economic Sciences, political philosopher and sociologist; and Alexander Piperski, linguist and science popularizer. We shared about common struggles, and spoke about such popularization methods as mythbusting and how natural sciences flourished in this genre because there are more applicable newsbreaks in their field. But this doesn’t mean that it’s easier to speak about them because as statistics show, modern readers treat the information communicated by representatives of humanities and the natural sciences community with an equal dose of scepticism,” noted Ilya Stakheev.

The key idea the discussion’s participants arrived at was that today, science in general has encountered the problem of communication with society, the authorities, and administrative bodies because of a certain devaluation of its expertise. And the problem isn’t that some sciences are more scientific than others – it remains on the level of global discourse: in an advanced society, a scientist is no longer the sole keeper and arbiter of advanced information, just as much as a politician is no longer a closed-off institution functioning in accordance to unknown power mechanics. All this requires a change in communication strategies.

Total Dictation as a scientific event

Following the results of the Moscow conference, ITMO.NEWS approached Ilya Stakheev for a comment. The expert spoke about the development of Total Dictation and shared his opinion on the projects that, to some degree, copy the approach of this famous initiative.

To what degree can Total Dictation be referred to as a popsci event?

Initially it was just a student-led project, but now Total Dictation has its own expert philological council, which influenced the development of a huge community of philologists from different parts of the country. The project became an opportunity to not only promote a caring attitude towards the Russian language, excellent writing skills, and modern prose, but it did even more just simple promotion: Total Dictation became a communication platform for professionals who used to function independently from one other, which of course left a negative impact on the development of scientific knowledge.

After Total Dictation, several more large-scale projects were created, such as Blank Map and Mathematical Dictation. But though operating on a similar mechanism, they didn’t become as popular. What do you think could explain this?

I did touch on that during the discussion, and this is one of my favorite provocative statements: no “maths dictation” or “blank map” will ever become as popular as Total Dictation because the language we speak in has deeper roots. We love in it, hate in it, speak in it, think in it. Formulas and maps are knowledge that we cognize analytically. This is exactly what Alfred Schütz was speaking about – a type of knowledge’s degree of relevance which directly correlates to its degree of impact on a person’s life. Language has the utmost degree of relevance, which is why some people are so sensitive to any changes in it, such trends as the increasing use of feminine gender-specific words and job titles especially. Some are for, some are against, but it’s hard to stay indifferent because it pertains to each of us personally, because language is such a huge part of our lives.