The new educational project University 20.35 has been launched as part of Russia’s National Technology Initiative. Its goal is to train the specialists of the future who will implement projects for high-tech markets. University 20.35 will be a digital network university that will make use of the country's best programs and courses. Every student’s educational path will be personalized and based on modules. University 20.35 is currently in its development stage; from November 7 to 9, a nationwide hackathon “Assemble a University” has been conducted so as to contribute to its creation. Students,  developers and startupers presented their ideas and prototypes of instruments that can be used for the project; ITMO.NEWS learned about the future university from the very people who aspire to study there. 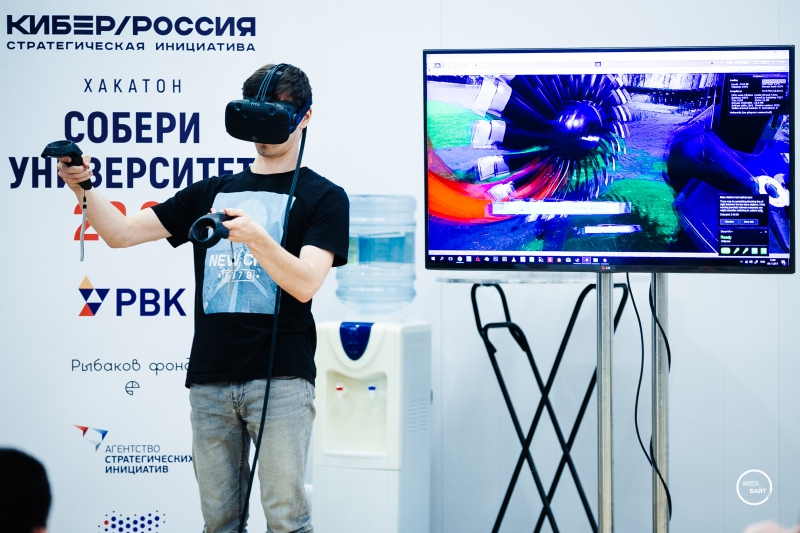 Trends: individual assistants in education
How can one understand which educational courses will be effective and which not? The new Liderium application developed by ITMO University’s A Team can help with that. The program helps evaluate one’s skills, competencies, and preferences based on the data provided, and offers an educational path aimed at reaching a particular goal, for instance getting a desired job position. The educational path may include different seminars, workshops, and hackathons as well as university programs and online programs or everything altogether. A special neural network will search databases for accomplished professionals in the chosen field of activity and use their data to develop the educational path which leads to similar results. Also, the project’s authors plan to develop a bot which will help users train for job interviews. The project is to be monetized via paid consultations, selling online courses and advertising partner universities. The Cosmos team from Tatarstan has also created an application which can help one choose the path to their future career. For instance, if one wants to work in aircraft engineering (AeroNet market in NTI), it will offer a range of universities which offer educational programs in this field. The user will be provided with a basic list of subjects and learn why they are considered important, as well as get a professional consultation. Also, the program can show the positions one can expect to get after completing these programs.

Employers are beginning to pay more attention to the online courses stated in potential employees’ resumes. Online education can help get relevant skills that aren’t taught at universities or have become relevant after one graduated; yet, sometimes it happens that after getting particular knowledge, the student doesn’t know where to apply it. Then, the time and effort spent on getting it can be considered wasted.

This situation can and must be solved, believe the members of the Badcode Corporation team from St. Petersburg Polytechnic University. They’ve developed a system which will inquire what competencies and skill the users have, which position he wants to get, and use this information to propose the courses for getting additional skills for his desired career. It also gives a list of job offers and the skills necessary for them according to the data from recruiting websites. This way, the potential student will get a better understanding of which jobs he will be able to use the new knowledge for. Trend: 3D, VR and AR
A team from the Novgorod State University raised the issue of students lacking practical experience and presented an idea of a startup that will create 3D models of particular equipment, chemical processes, biological organisms - well, anything. This way, students will be able to study human anatomy by using 3D models of organs and body parts or learn about chemical processes from illustrative videos and not written formulas.

Another team proposed to use AR goggles so as to increase the efficiency of distance education. Instead of spending hours in front of the computer listening to endless lectures, the student will get the opportunity to really communicate with the lecturer, perform tasks modeled in VR and learn about their mistakes right on the spot. According to the project’s developers, that well may count as getting practical skills. Also, using AR goggles is simply more comfortable: you don’t have to open additional applications, switch between functions or perform routine written assignments. Trend: feedback on the lecturers’ work and students’ achievements
The Polymer team decided to help students share opinions of different lectures. Oftentimes, even if a lecture is interesting, the students don’t get a summary of it or the opportunity to ask the lecturer questions. To help deal with this issue, the hackathon’s participants proposed using a special application where students can make notes about the new material, question the lecturers by tagging certain parts or just mark particular pieces as too boring. As result, it will be easier for the students to navigate the material once the lecture is over, and the lecturers will get sufficient feedback. Surely, that would require uploading the lecture into the app first, but the team believes that such an app will let the students be more active and relieve much of their stress.

As for the QLabs team, they’ve presented an idea which can help lecturers evaluate the students’ training. The students are to solve problems in a special app which will track the time spent on each of them. After comparing the results, the program will define whether particular students comply with the overall level and give recommendations if completing some additional training is necessary. According to the authors, the system can be used in distance education, as well. All in all, 20 teams participated in the hackathon in St. Petersburg; they competed amongst each other in two groups, ten people each. The Future Boost and VIOTR team became winners; you can see the detailed results here.

According to Vladimir Kublashvili, one of VIOTR team members, they’ve received a collaboration proposal straight after the hackathon’s end. VIOTR proposed using VR for training employees to work on remote facilities or react to emergencies. For instance, by using VR goggles, an engineer who is to go to a remote site can learn about the local equipment and train to work with it in advance. By the way, the VR will be modeled by means of laser scanning, which implies photorealistic quality.

“Currently, there are no counterparts to our project. They use VR in education, but use computer modeling and not photorealistic copies. Point is, if you make a model of some facility, both it and the equipment there will be ideal, not like the ones you’ll see in real life. Even the buttons can on some machine can be misplaced. At the hackathon, we’ve presented a model of the boiler room in Lenpoligraphmash, which we’ve created in just the several days of the event,” comments Vladimir Kublashvili.

The Skyeng English school got interested in VIOTR’s projects as a means to carrying out its own tasks. According to Mr. Kublashvili, they received an order from St. Petersburg Metro on teaching their data center employees and cashiers English. VR can be used to model their workplaces and help train them to speak to foreigners.

Apart from St. Petersburg, “Assemble a University” also took place in Moscow, Ulyanovsk, Tomsk, Vladivostok and Makhachkala and brought together about a thousand participants, having become one of the world’s largest hackathons in the field of education. Its winners and award winners received not just valuable advice from the mentors, but also prizes from partner companies. The overall amount of investments iin the proposed projects was more than 10 million rubles, the prize pool was 800,000 rubles. University 20.35 is a large-scale federal project aimed at training company leaders, participants of the NTI and specialists working in global markets. It is to become a network university, meaning each student’s program will be comprised of different courses accessible via different educational platforms, the country’s best educational establishments included. The Federal Agency for Scientific Organizations and commercial companies will partake in the project, as well.