Social Media: Does It Change Us? Here’s What Science Thinks

These days, it’s impossible for us to imagine spending a day off social media. How do they affect our mind and psyche? There’s always a negative undertone to this question: do they make us dumber, waste our time, or make us vain? But let’s see what science thinks about this matter. ITMO.NEWS sets out to understand – how does social media really change us? 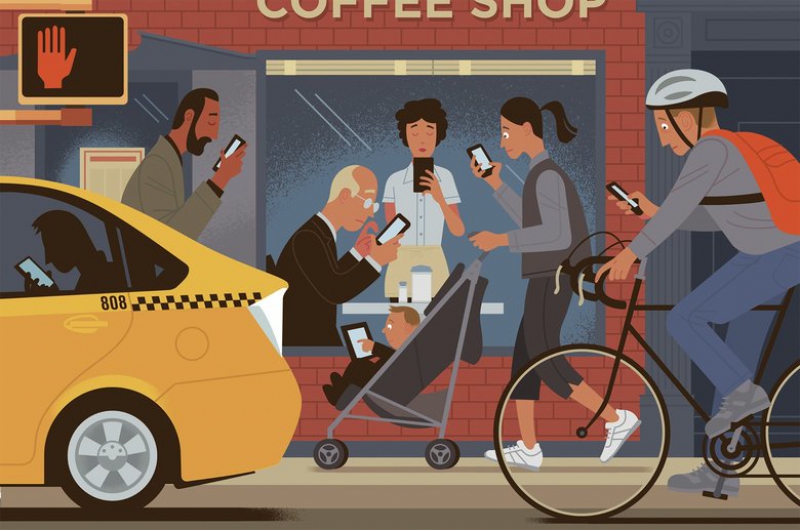 A bit of history

ICQ, the world’s first messenger software in the modern sense of the word, launched in 1996. However, the website Six Degrees, launched a year later, is considered to have been the first actual “social network”, letting users set up personal pages, find friends and exchange files. This means that social media is now barely more than 20 years old.  However, social networks finally got big in the 00’s, with Facebook (2004), VK (2006), and Twitter (2006) followed by Pinterest and Instagram in 2010. Thus it can be said that the true, “active” age of social media is approximately 13 years.

Despite being so new, social networks have won the hearts of nearly half the world’s population. Approximately 2.64 billion people used various social media outlets in 2017, and that number is likely to reach 3 billion in four years. The Earth’s total population, meanwhile, is assumed to be around 7.5 billion.

The most popular social media platforms in Russia are VK, YouTube, Odnoklassniki, Facebook and Skype. 39% of Russians have an active account in at least one social network; the most popular network in the United States is Facebook, with 68% adult Americans as its users. Another 28% use Instagram; other popular services are Pinterest, LinkedIn and Twitter. People all over the world spend an average of 109 minutes a day on social media, though the numbers differ from country to country: Brazilians have an average of 180 minutes, while Americans – only 95.

So what is the physical and psychological effect of social media on humans? Seeing as this is a new phenomenon, researchers have only concerned themselves with this question recently, but some data already exists. So, is there really a need for us to change our social media habits?

Two years ago Pew Research Center looked into the relationship between adults’ stress levels and their use of social media, surveying 1,801 respondents. Participants were asked how often they experience fatigue, overload, or felt overwhelmed, as well as describe their social media habits.

The study found no correlation between stress and the use of social media; quite contrarily, the less active users were much more stressed out than those who liked to hang out on Facebook. This only applies to women; no discernible patterns were noted among men. It should also be noted that women reported an overall higher level of stress than men.

Researchers, however, noticed another interesting pattern: people are prone to worry for their friends and acquaintances when they learn about their problems through social networks. And the more they hear about these problems, the more worried they grow. Researchers dubbed this occurrence “the cost of empathy”.

This behavior is confirmed by a study done by a team from University of Bradford (UK). The researchers gathered a group of 189 people and showed them social media reports of disasters, acts of violence and the like. Later, a quarter of the group showed signs of post-traumatic stress disorder – even though none of them were actually present at or related to these events. Bad news elicit a strong emotional response in people, which is exploited by mass media outlets. After all, as the saying goes – no news is good news.

Advice: empathy is undoubtedly a good thing. Still, try to learn how to filter out the negative parts of social media. Unsubscribe from communities and block from your newsfeed the updates made by your negative or problematic friends. Save some of your empathy for face-to-face contact.

This isn’t just a guess. The Oxford dictionary now includes an entry for the acronym FOMO (Fear of Missing Out), referring to how people may seem unable to abandon social media in fear of not seeing an important piece of news or a message. It’s kind of like this: you’re at a party, but instead of socializing you check your phone every five minutes; you’re watching a movie and yet instead of letting yourself relax and enjoy the film, you keep checking your newsfeed; you’re on the subway, walking while looking at the screen because you can’t put off checking that one message until you’re on the train.

FOMO has one serious negative effect on life: those who are dependent on social media quickly develop a sense of missing out on things, conclude researchers from Texas A&M University. When people keep seeing others achieve professional or personal success, see others go on vacations they can’t afford or demonstrate skills they don’t have, they might develop feelings of being inferior and missing out on opportunities. Moreover, this constant awareness of others’ achievements is seen as something that’s being “taken away” from the individual.

This behavior facilitates a person’s loss of identity. People with FOMO pay more attention to others’ lives than to their own, and base their actions and thoughts on what “they” do or think. These people come to suffer from social anxiety and despair. Many experience strong negative effects from FOMO, yet refuse to accept it.

Advice: the scientists themselves joke that FOMO must be compensated with YOLO (you only live once). If you want to deal with FOMO, the simplest solution is to distance yourself from social media – which isn’t easy. Research shows that quitting social networks can be harder than saying goodbye to tobacco or alcohol.

Scientists also advise to be aware of one’s negative thoughts – and to write them down so as to analyze what causes them. You can also try to replace negative thoughts with positive ones. Instead of thinking about how good someone is at playing the guitar or dancing, think about what you would like to do. Perhaps you’ve always wanted to play the piano? With time, you’ll realize that spending that one bit of free time on a hobby instead of checking your Facebook feed is a much more pleasing and positive experience.

Research from 2011 shows that dependence on social media causes issues with socialization, academic and work performance. Some cases might even call for medical intervention.

A small study that involved 34 pairs of strangers showed that the mere presence of a smartphone on the table at which the subjects were sat decreased the quality of their conversation. Those who sat with a phone in front of them were less pleased with the conversation and less interested in staying in touch with their interlocutors than those who didn’t have a smartphone in their line of sight. Moreover, the conversations between phone-less pairs were more emotional and trusting. Psychologists suggest that having a smartphone in one’s field of view makes them believe that they are among a larger group of people, therefore reducing the amount of attention they dedicate to a single person.

Frequent views of others’ social media profiles may cause a feeling of envy. This is yet another side effect of FOMO and a reason why the quality of relationships between close acquaintances might be dropping. Researchers at the Humboldt University of Berlin surveyed 600 adult social media users and learned that 1/3 of them experience feelings of envy when seeing pictures of expensive items, travels and other costly activities on their friends’ pages. This envy provokes people to create their own “happy” posts to embellish their lives, causing a vicious “envy spiral”. This “arms race” can have a negative effect on relationships between friends.

Besides, having 2,000 friends on Facebook doesn’t mean the person actually has friends; in June 2017, the American Journal of Preventive Medicine published the results of a survey that involved 1,787 subjects aged 19 to 32. Those who spent more time on social media were actually twice as likely to experience social isolation, or, simply, loneliness.

Advice: put away your phone when you’re with friends; simply be happy for your friends’ successes and joyful moments (and you can tell them about it with a text message, not a beach selfie).

Researchers from University of California in San Diego have conducted a fascinating study. Their goal was to find out whether people’s negative posts on social media cause their friends to make more negative posts. For that purpose, scientists analyzed negative posts concerning rain. If someone posted something negative while it was raining in their location, the researchers looked at how many of their friends did the same. Their analysis was restricted to those friends who were located in other cities where it wasn’t raining at the time. The results showed that each negative update would cause 1.29 negative posts among the person’s friends. But there is good news, too: each positive post causes an even bigger cascade of happy updates – 1.75 for each.

Advice: post more positive updates to improve your and your friends’ mood.

To sum up: it would be wrong to say that social media is “evil”. It helps us stay in touch with those who are far away, we use it in our work and to find friends and like-minded people. Nevertheless, it’s time to be aware of our social media habits and learn to combat their side effects.