New Semester At The Children's University

It is the start of the spring semester of the Children's University - an educational project for primary and secondary school students. Up until the mid-May, lecturers from leading educational establishments, including ITMO University, will train its participants on a weekly basis. Some of the educators who have already tried themselves as lecturers for the project shared about how it helps get children involved in science. 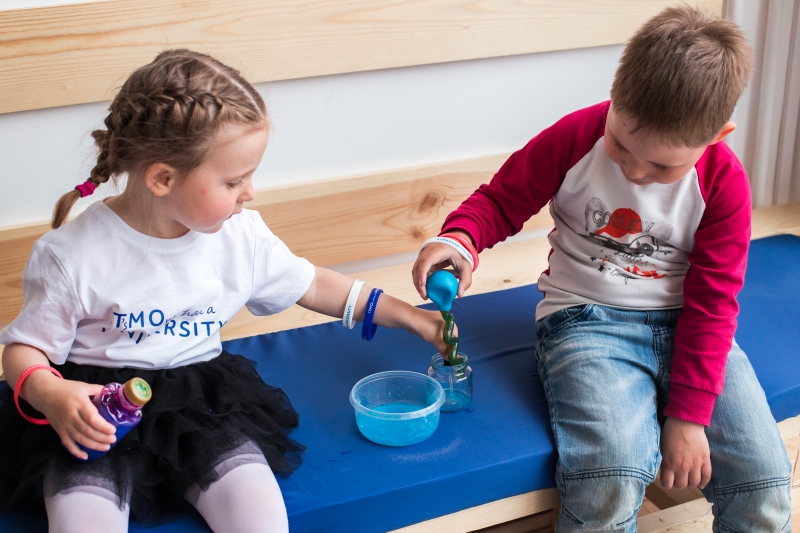 The Children's University exists in St. Petersburg since 2015; a similar project has been successfully operating in Poland for a much longer time already. There, they educate up to 10,000 young students in Krakow, Warsaw, Wroclaw and Olsztyn every semester. This year in St. Petersburg, 350 students signed up for the project. The event’s main goal is to explain to these children how the world works, as well as to give them an understanding of what higher education is and how it’s organized.

This time, the semester will include four educational programs for participants of different ages. The lessons will take the format of interactive lectures and workshops; the older students will have the opportunity to choose the ones they want to participate in. The students note that at the Children's University, they are given access to knowledge they can’t get at school, and the lectures are a lot more interesting. So how does it work? What are the best ways to organize lessons, what kinds of students should be interested in the project, and what can parents do to get their children involved in science?

“The main thing is that it is the children who have to speak up, not the lector,” - Vladimir Pshenichnov, Associate Professor at ITMO’s Department of Physics.

The most important thing to consider when you’re organizing a training session for children is that it is not the lector who has to tell children things, but it is the children who have to speak their minds. The lecturer’s role is to to ask questions, make children think, and direct them towards the right answers; the students have to not just gain knowledge, but learn to draw conclusions on their own. Such an approach helps to develop their reasoning, especially conceptual thinking, which is most important in any science. This is why I believe that it’s best to work with small groups, where you have the time to listen to each child.

What is more, this approach fosters positive associations with studying and, therefore, science in general. In regular schools, the situation is exactly the opposite: there’s no individual approach, no attention given to the children, so they often develop resentment for the very process of education.

Parents should also foster their children’s interest in learning. Needless to say, no grown-up can know the answers to all of the questions their children ask. Yet, one should never brush these question off, but teach the children to search for information themselves. Something like saying: “Sorry, I don’t know the answer to your question, but you can read this book to find it, or ask your grandpa, as he knows more about this particular subject” would suffice. In other words, parents have to show their children that you can find any information, study any subject and get the answers you seek as long as you put in some effort.

“Our task is to show the children how the world works, not just bore them with complex concepts,” - Evgeniy Anfimov, programmer at ITMO’s FabLab.

In order to make the sessions more interesting, we’ve been ironing out the difficulties, i.e. we’ve dropped the information that would’ve been too complex to understand. For instance, we had a group of 12 children to whom we explained the work of a microcontroller. Needless to say, we didn’t talk about programming and complex mathematical issues. We simply gave a microcontroller to each pair of students, which they could operate, and showed them how it’s done, explaining everything step-by-step.

Such training sessions shouldn’t be too complex or too simple; for that purpose, the material for them is checked by the University’s experts. Still, the most difficult part when organizing a workshop is to keep your students’ attention. You have to do everything in such a way that they wouldn’t get tired when there are 60 people in the classroom. For me, that was an incredible experience; it will be definitely of use to me at FabLab, where we, too, get to teach school students now.

“When working with children, you have to talk about things they're familiar with,” Alexander Ishevsky, Head of Department of Meat and Fish Processing and Refrigeration.

The structure of training sessions at the Children's University is different for students of different ages. For the youngest of them, we conduct lectures in a way that each concept leads them to another. This way, the children see each lesson as some story, and are eager to learn its finale. Unfortunately, such an approach is not enough for the older students; they need some problem to work with. For instance, is it good or bad that we eat hamburgers? We don’t need to spoon-feed the material to them - we have to give them something to think about. Both younger and older students like it when we talk about things and phenomena they are familiar with, something that’s part of their daily lives. Also, the younger students really like bright, colorful presentations. And since they are easily distractible and start losing focus after about 20 minutes, it is better to take breaks.

In order for the children to really remember everything they’ve learned, a good idea is to leave something as a reminder. At the Children's University, we use handouts. It’s best when they have different tasks, like crossword puzzles, for instance, so that the students can come home and go through the materials again in the comfortable surroundings they’re used to. By the way, all of these recommendations can also be adopted by parents who want their children to get involved in science - after all, they say that 75% of one’s upbringing takes place at home.

“Students who come to the Children's University are those with a proclivity to learning something new,” - Sergei Stafeev, Professor at ITMO’s Department of Physics, Lead Expert at the ITMO.KIDS Technopark.

Students who come to the Children's University were not pressured into doing science; they are those who came to study because they were already interested in science, and are ready to spend their free time studying. When I worked with them as a lecturer, I felt that they are genuinely curious about what I had to tell and show them.

Lectures at the Children's University have to be more like science shows. You have to show, not tell. This is how memory works. Tell me something - and I will forget it; show it to me - and I might remember. Entertain me - and I’ll understand it. In essence, we have to show examples, communicate with children, induce an emotional response. We also have to keep their attention, which means learning new skills ourselves. All of that is a complex, but very enticing task.

“A child has to try different activities so as to choose the one to focus on,” - Elena Bobritskaya, Associate Professor at ITMO’s Department of Physics, Director of the Museum of Optics.

At the Museum of Optics we conduct workshops for children of different ages. To all of them, we show the very same material - the trick is to present it differently. For the youngest of them, we mostly focus on the gaming format. Older kids prefer tinkering with things. As for our oldest students, they lose interest in working with their hands, and are eager to learn about the possible applications of particular phenomena, so yet again we are back to the gaming format, though on a more serious level. We show them how different devices work, and the physical concepts behind the things they see in their everyday life. Their interest toward these issues largely has to do with them starting to look for their place in the world, trying to understand what they can do and what good can come from it.

We also want to make it so that the children don’t forget what they’ve learned here. For the younger kids, building an optical toy is part of the tour; they take the toy home, and remember what they’ve learned when they play with it. We also use simple real-life examples to explain the different laws of optics; this way, the kids can remember them when they see something similar in their daily lives. Older children get to fill in special leaflets where they write the conclusions and observations they make, and do sketches.

Generally speaking, activities such as going on a tour of the Museum of Optics or participating in the Children's University let children broaden their horizons. And there’s a lot more to it than just new experiences: it’s very important for a child to learn what they want to do in their life, learn about their options. Children have to try different things in order to decide on their future development paths. This is what ITMO.KIDS Technopark is meant for. Here, its guests can try themselves at various fields: robotics, programming, and many others.