How much of your personal data are you willing to share in order to enjoy various comforts? Can a neural network replace a living person? Can we cope with digital doubles? Questions posed by modern technology paint pictures that are either horrifying or inspiring, but always outlandish. Participants of the Future Culture Lab, held at ITMO University with support from the TECHNE art project and University NTI 20.35, tried to express their concerns and answer these questions through art projects that combined new technology and creative thought. 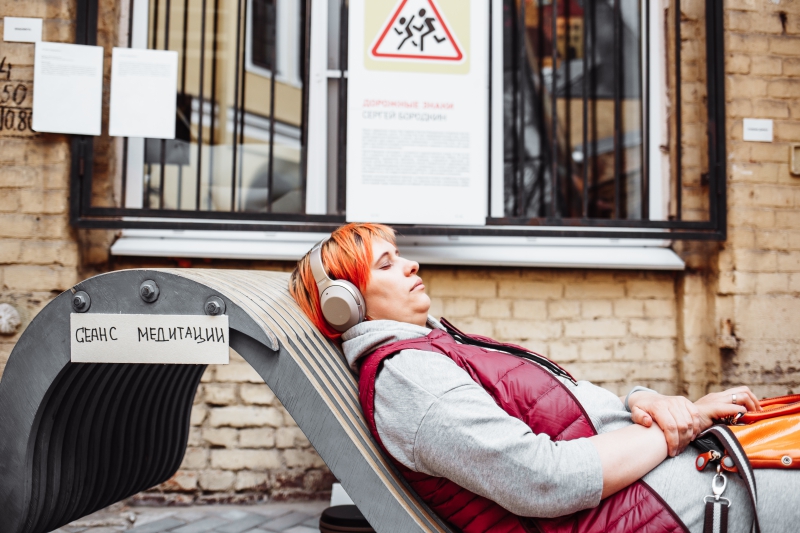 Future Culture Lab is a part of the Art&Science movement. Works in this new field of art use modern technology to create new aesthetic images and create a manifesto of the issues of today and tomorrow. Societal concerns have always been reflected in the works of artists, writers, and musicians. And sometimes, their predictions come true, like the prototypical “laser” in H.G. Wells’ “War of the Worlds”. Oftentimes, artists are the first to combine elements of the present and make predictions of the future.

The goal of Future Culture Lab was to unite engineers, philosophers, artists, writers, and scientists and encourage them to create technological art projects. Their creators expressed their thoughts on how the development of technology may affect the psychological and emotional human condition, and which new questions may arise. The projects were developed between May 18 and 20, and the creators then spent several more days creating the installations. Lectures and workshops were held by media-art experts, inventors, artists and communications specialists. Participants created 11 projects: an astonishing result when you consider the time they were allotted, says the project’s curator Olga Remneva.

“In terms of implementation, the St. Petersburg Future Culture Lab went even better than the one we held in Moscow this winter. There, we focused on the general image of the future, and it was a lot more abstract. Here, we asked the participants to focus on a specific question: how will the inevitable development of technology affect our perceptions of ourselves and others? We intentionally invited people of very different trades to let them work together. The participants were eager to work together; if someone was interested in working with the topic of open data access, others would flock around them. The Lab’s working principle was that of a curated evolution: we pushed everyone in a particular direction, but they still had to make their own conclusions. We hope that these teams will continue working with each other in the future,” – said Olga Remneva.

The creators worked with several topics, including the fear of the future and the uncertainty caused by rapid technological development. Some projects touched on the use of neural interfaces that symbolized a new level of self-understanding and self-projection.

“We suggested that the participants have a conversation about the future through the use of technology, and there were several basic principles. The first is that you trust yourself and your feelings. If you feel afraid, then work with fear. Others felt inspired and thus created inspiring things. The second principle is trusting others in order to create an environment for dialogue and mutual understanding. Together, we all tried to understand how technology changes us and the society, and then to present these answers in the form of art projects,” – added Ivan Ninenko, the event’s curator, at the final presentation of the participants’ projects.

The project “Museum of Relevant Past” sends its viewers into a future museum that exhibits today’s everyday objects as “artifacts of the past”. These include smartphones, headphones, and even coffee. The visitors at this museum apply a special substance onto their skin in order to experience these objects and understand the nature of things that are long gone. The project’s authors want their contemporaries to do the same: to consider the reasons why headphones or coffee will one day become unnecessary.

Creators of the project “Sensorium” have developed a prototype neural interface that identifies emotions based on brain activity. The wearer has a special display where they can see the emotions they feel upon hearing particular words. The project is designed to be used by two people familiar with each other. The two equip the device simultaneously and see which emotions are prompted in their mind by specific words, learning just how similar (or not) they are. In essence, the neural interface lets people interact with each other on a new level without using any words.

Another project that employs a neural interface is “recurSelfie”, which lets people take “brain activity selfies”. The device performs an EEG test and uses the results to create a colorful image, showing that neural interfaces do indeed work and that they can create a visible brain activity image for anyone.

Artists at Future Culture Lab also concerned themselves with the topics of neural networks and self-learning programs. In the project “Post-Emotions”, its creator tried to show why future neural networks will learn human emotions. Today, interhuman communication is becoming rapid and digitized, and perhaps soon enough we will need to teach machines to recognize our emotions to make communication even faster. When someone smiles at the camera, a computer display lights up with a complex image that reflects their emotions. For another project, called “Fear of the Future”, its creators built a prototype neural network combined with a neural interface that learns from brain activity. The authors wanted viewers to consider whether someday neural networks might replace living people as our companions.

The project “Digital Consciousness” suggests a reality in which all personal data is accessible. A video shows a future where anyone can easily gain access to all information on a particular person. What if we were forced to choose whether to share out credit card PIN or lose a social privilege? Would you share access to your social media accounts in exchange for the passwords to your friends’ accounts? The authors touch on the issue of protection of privacy and want to warn the society about the danger of losing one’s self in our digital footprint.

The topic of digital doubles is picked up by the project “Sensitive Fabric”, which asks viewers to think about what their digital doubles will look like. The guests would be presented a digital shadow that copied their movements and took on various colors. The more aggressive their movements, the darker the colors would get, while smooth movements would make the colors soft and blurry.

These and other projects from the participants of Future Culture Lab were shown at the Museum of 20th and 21st Century St. Petersburg Art (MISP). The exhibition was staged as an introduction for the launch of ITMO University’s new Master’s Program “Art&Science”, which you can learn about in more detail here.