What has changed in urban planning over the last 100 years? What future lies ahead of industrial centers? And what do small Northern cities in Norway and Russia share in common? These and other questions were discussed during an open lecture by Norwegian specialist in the field of urban planning and technologies Gunnar Olav Furu. He is the head of a private consulting agency and has implemented a range of urban development projects in his home city of Sunndal. The lecture and an interactive workshop took place at ITMO University’s Institute of Design and Urban Studies with the support of the Consulate of Norway. 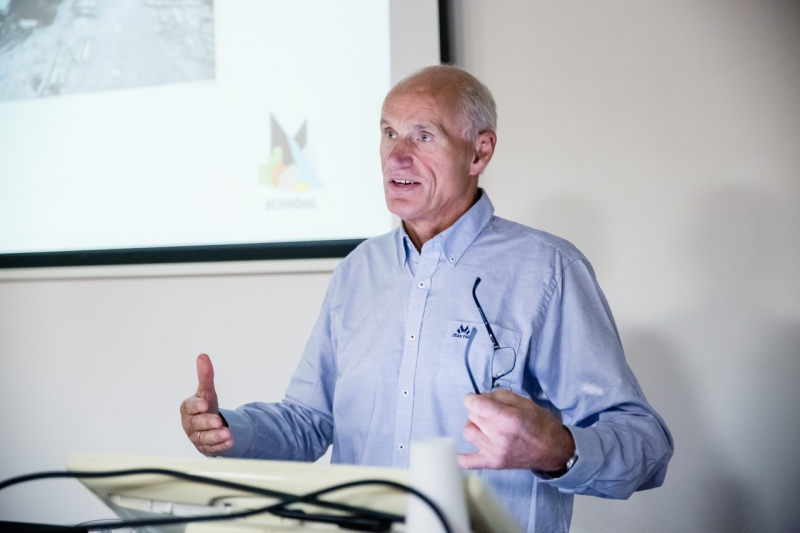 The lecture was opened by the Norwegian Consul Henrik Foyn Skjerve, who shed some light on the long-lasting collaboration between Norwegian Consulate General in St. Petersburg and ITMO University.

“Collaboration in the field of science and higher education is of great importance for the Norwegian-Russian relations. After all, knowledge is the only thing that multiplies when shared. ITMO University has long been our partner, and I am really glad to see our cooperation continuing,” he says. “The topic of sustainable urban planning is becoming more and more important for the regions where the economy and industry are actively developing. This is why I think the experience our guest has to share can be very useful for St. Petersburg.”

Gunnar Olav Furu comes from the town of Sunndal located in the western part of Norway. A small village in fjords, by the end of WWII it turned into an industrial center with the biggest aluminum factory in the country. By 1970, 8,000 people lived in Sunndal, and it was then that the population started to decrease because of the pollution caused by the industry. Around this time, Gunnar was assigned to the position of the planning director at the municipality and was given a task to prevent further emigration.

His main task was to turn Sunndal into a nice place to live in and motivate people to stay. In the course of 25 years, he has implemented several major projects to achieve this goal.

In this interview with ITMO.NEWS, Mr. Furu shares about his experiences and talks about the similarities between small industrial cities in Russia and Norway.

This isn’t the first time you’ve been to Russia. How often do you get to visit St. Petersburg?

All in all, I’ve been here six times. I first came to St. Petersburg in 2011, to participate in a conference on urban planning. My following visits were to give lectures to students. For example, last year I came to give a lecture for the students of ITMO University’s Faculty of Technological Management and Innovations. This happens to be my second visit to ITMO.

Have you noticed any changes in the city over these years?

A lot has happened in St. Petersburg, and these changes can be noticed very easily. What I want to accentuate is this: I truly believe that the city shows a growing interest in the topic of urban planning. I see that this is becoming a genuinely important aspect for all of you here.

This time, you’re giving a lecture and an interactive workshop for the students of ITMO’s Institute of Design and Urban Studies. What knowledge and skills can they obtain as a result?

First and foremost, I’d like to note that my experience isn’t connected to urban planning in megapolises. There are over five million people living in St. Petersburg today, which practically amounts to the entire population of Norway. That’s why there is no doubt that the living conditions in large and small cities are very different.

In Norway, there are dozens of industrial municipalities. In Russia, in its turn, there are about 300 cities and towns that face the same problems. And this is what I focus on in my presentation so that students can see how to change life in such small industrial cities for the better.

How exactly does this similarity between the problems faced by small industrial cities in Russia and Norway manifest?

Above all, in that many small towns and cities experience significant issues related to the population size and the outflux of local residents. And I’m sure that in this regard the situation in Russia is similar. That’s why I’d like to use our municipality as an example to show how you could develop urban planning and small businesses in a small territory.

Our region is historically known as an industrial center with one of the biggest aluminum factories in Europe, given that it’s only some 7,000 people who live here. There are many industrial cities in Russia as well, including those specializing in the production of aluminum. Russia and Norway are among the world’s leaders in this segment.

Over the course of many years, you have been conducting the planning of the Norwegian municipality of Sunndal. What kick-started your work?

It all began 25 years ago. It was then that I started overseeing urban planning in the Sunndal municipality and a lot has been achieved since then. I hope that we did manage to turn our area into a nice place to live in.

Changes were necessary, especially for young people. When they start building their career, they certainly seek for the best place to do it. What is more, apart from career prospects, quality of life is also a very important factor for them.

What have you managed to achieve in these years?

Our city has undergone significant changes over these 20 years and not only in terms of physical planning. We had a city plan which had been in place since 1913 and applied in ‘50s and ‘60s. It wasn’t a bad plan, but we realized that changes had to be made. The streets were wide but there weren’t enough green spaces, and there were no bicycle lanes.

The latter is especially relevant to us as our city isn’t a large one and it’s much easier and more economically viable for people to use bicycles in place of personal cars or public transport. We have a small population, and organizing a branched bus network that would operate with 10-15 minute intervals isn’t a simple task. Last but not least, bicycles are just better for your health.

It was the creation of biking infrastructure that we started our planning from. Of course, it required a significant amount of investments, but if you really manage to build an operational system these costs will pay themselves off later on.

What challenges have you faced in the course of your career? Have you managed to overcome them?

Back when we just started, it was all completely new to people, those living in Norway included. Now people understand why we need to create an extensive cycling infrastructure, however many years ago, the situation was somewhat different. What was also important for us in terms of creating a comfortable urban environment was to develop public spaces, which was also quite a challenge.

Despite the fact that St. Petersburg is considerably different from small cities, it also has a rich industrial past, and there has been a range of projects recently that focus of the renovation of local industrial areas. One example is Sevkabel Port; historically a dock, it has now turned into the city’s largest urban space. In your opinion, what the sustainable future of industrial centers would be like?

It really is a challenge. It is true: our past left us with a whole bunch of industrial areas and sites, which cannot be used as before, and we have to find a better application for them.

I see that in this sense, St. Petersburg faces problems that are similar to that of other megapolises: the city is growing, becoming larger and larger, and people residing in its outskirts are finding it harder and harder to get to work every day. One of the solutions could be not expanding the city but finding ways for more efficient and intensive use of the territories within its current limits. I think that this is an important point of view.

Of course, it’s cheaper to build a shop or any other object in the outskirts of the city. But I still believe that we have to create opportunities for the development of public spaces, shops and other infrastructure in the city center.

What could be other ways of working with obsolete factories and huge industrial spaces which can’t be used for their initial purposes anymore?

There aren’t any industrial buildings in our municipality that could be potentially turned into vibrant public spaces or something of this sort. We attempt to introduce innovations and develop our industrial capacities in order to meet current economic challenges. But in other regions of Norway, I know that there are many examples similar to those that you talked about earlier (you can learn more about the projects implemented in the country here).

In fact, these places can go on to become venues for many interesting projects. They can not only be used as public spaces but also coworking sites, for example.

In your opinion, is it possible for the experience of small cities in Norway or other Scandinavian countries to be applied in the north of Russia? At the very least, our climate conditions are very similar.

Yes, the climate is very similar. First of all, I want to say that all countries have their challenges, and Norway is no exception. I think that we can find many things we have in common and share experiences in order to change things for the better.

I’m sure that people in Russia seek to achieve the same goal: to create a better place to live in. In that sense, as I’ve already mentioned, it’s important to pay special attention to urban planning, cultural development, and the creation of public spaces.