City dwellers often don’t have the chance to express their support or opposition to various urban development initiatives. And it’s not because there’s a lack of ways to do that, but that people may find it difficult to express their ideas. One way to solve this problem is to use a game-based approach, suggests Milena Ivkovic, an architect, game designer and head of Rotterdam-based company Blok74. She offers urban residents to play games as a way of showing the environment they’d like to inhabit in a simple, informal setting. Ms. Ivkovic explained her game-making process during a recent workshop at ITMO’s Institute of Design and Urban Science. 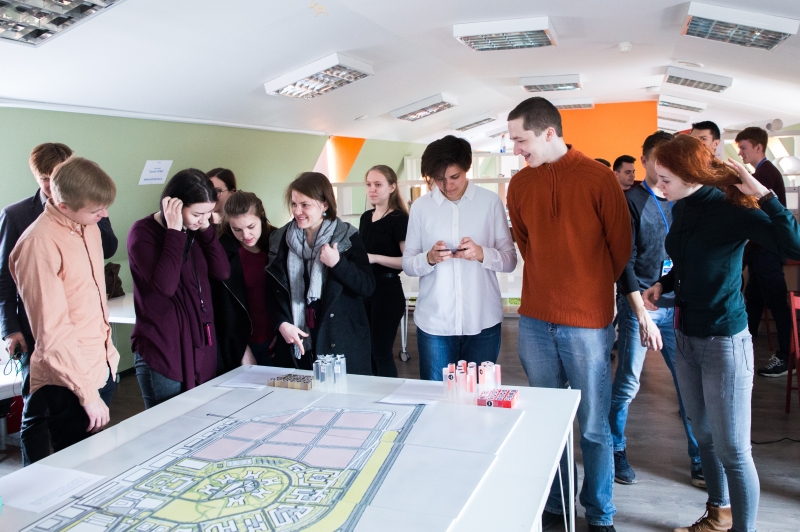 Open Doors Day at the Institute of Design and Urban Science

What is urban gaming? This is a way of getting citizens involved in urban management. We started to develop this method five years ago. Back then, I was really impressed by the opportunity to use various media tools to make complex questions simpler. What makes urban gaming a new method? I think you’ve noticed that digital tools and games have become increasingly more popular over the past 10 years. We all remember SimCity and other city building and management simulators; these are a great way to interpret and appraise the various urban processes. I try to use the dynamics and mechanics of digital gaming and apply them here. It’s a way to teach urban scientists about how cities work and how the different groups of population interact with each other. For citizens themselves it’s a great way to test their ideas.

I began by creating a 3D-model, so we took a traditional approach and created a physical model. The turns and actions in the game establish relationships between the players, and these relationships affect the environment. It’s a lot more interesting than working with two-dimensional tools, i.e. blueprints and maps. We analyzed the most popular video games to see how people interact with each other and the game environment, and then applied those same mechanics in our project.

Who is this game for? Firstly, for politicians. If they’re not sure whether a particular proposal is truly good for the infrastructure, they can gather feedback using the game. Secondly, the game is a great source of information on citizens’ behavior. Thirdly, it’s an opportunity for the citizens themselves to express their ideas, because in the game they’re free to implement even the wildest ideas, with no limits at all. There are three basic principles in the game: collaboration, competition and construction.

My main goal when creating the game was to combine the hi-tech approaches used in urban development with the approaches related to how citizens accept and perceive their own reality. Players are asked to create the best possible living environment through interaction with each other. We once held a large play session in Berlin in which professional designers, architects and graphic designers participated. Together they were able to test the ideas they came up with through mutual communication.

Visualization is the main language of the digital world, which is why we love playing games so much. I just wanted to repeat the same visual paradigm in our gamified urban science. Because when you have to work with people from other fields, the only language you can use is the visual language.

How does it work? Let’s say there’s a part of the city that you want to create and you have several development scenarios from which you can choose. But you have to know, how this or that change will affect everyone else. That’s why there are four player roles in the game: citizens, government officials, businesses, and urban scientists. If you want to build a city, you have to collaborate; it’s a multi-faceted and interactive process where everyone uses their various abilities, tries to figure out how they can be used to change things and fulfill other players’ needs.

We’ve also developed a mobile app which we use to track the players’ behavior. We use it to analyze what happens on the board and collect feedback: we can identify what issues appear the most crucial to players and which ones cause strife. For instance, if it becomes apparent that there’s a strain in communication at some point in the game, we learn that we have to research this situation more in order to avoid a similar conflict in real life.

I always try to ensure that people from different fields participate in the game. The problem is that citizens, both in-game and in real life, have a hard time coming to an agreement with each other, especially if they come from different social groups. The game helps them learn to do that. I usually serve as a moderator and encourage players to work together and deal with divisive issues. When they play, people aren’t afraid of being open and honest, of stipulating their conditions, but most importantly they learn to communicate with each other.

What is the resulting data used for? We can give the players genuine urban development plans and see which ones they like best. We can use large player groups or host many game sessions if there’s a need to figure out the public opinion on some topic. As for local changes, it’s enough to gather just a few small groups of people who live in the particular neighborhood.

Still, you have to keep in mind that this kind of urban gaming doesn’t always help change the actual urban environment, and the issue here lies mostly with bureaucracy. For example, the results of that big Berlin game have already spent two years bouncing around from one government office to another. All of it must be properly put together as a report, inspected by local officials, then there’s the matter of estimating a budget… it’s a lengthy process.

The game is, of course, a great educational tool for students and specialists. The rules are simple enough that you don’t have to be a professional. There is one obstacle, though: you can’t make everyone play. First will come those who simply like games. But if we make it a great experience for them, they’ll tell their friends who will also want to give it a try. Another difficulty is that people sometimes have a hard time projecting the game environment onto the real urban environment. But anyway, even though it’s just a game, it helps citizens and officials look at the same issues from different points of view.

After a lecture, Ms. Ivkovic hosted a game session for the audience, which included students from ITMO’s Institute of Design and Urban Studies, students in relevant fields from other universities, and specialists in the field of urban science. Hans Wesseling, the Consul General of the Netherlands in St. Petersburg, provided opening remarks. He pointed out that in 10 to 20 years, most of the world’s population will inhabit cities, which is why it’s important to start thinking about cities of the future and how they will look. As an example, he brought up his hometown, the Hague; just 20 years ago it was a fairly small town, but that has changed now. Or Eindhoven – just decades ago it was an industrial city; today, it’s a modern student city where the former industrial objects have become functional spaces used by the citizens for their own needs.

“We live in politically difficult times, which is why it’s important to keep cooperating with each other on culture, education, and the creation of comfortable living environments. It’s important to develop academic partnerships and to start thinking today how cities will function in the future,” – said Mr. Wesseling.