“I Am a Professional”: Competition Winners on Experience Gained and Opportunities Discovered

More than 90 students of ITMO University have been named winners of the national competition I Am a Professional, 19 of them receiving the top prize as medal winners. All of the students will not only gain renown, but also significant advantages when enrolling in Master’s and PhD programs of the competition’s partner universities, an opportunity to do an internship at some of Russia’s top companies, and a monetary prize of 100,000 to 300,000 rubles. ITMO.NEWS met with some of this year’s winners to find out what brought them to the competition, how difficult they found the final tasks, and what opportunities they’ve discovered through this experience. 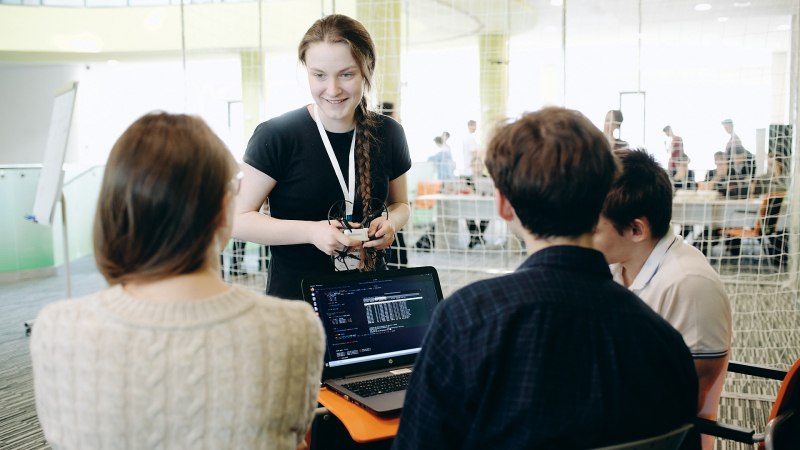 I Am a Professional. Credit: social media

Ekaterina Kosareva, gold medal winner of the Robotics track, second-year student at the Faculty of Control Systems and Robotics

The qualifying round for the Robotics track consisted mainly of theoretical questions, the answers to which I already knew from my first two years at ITMO. The first on-site round, on the other hand, was entirely practical. We were asked to use the Robot Operating System (ROS) to write software for a quadcopter and a three-wheeled omnidirectional platform. The experience I gained at ITMO University’s ADL Lab helped me complete the task.

For the second round, held at Innopolis University, we were randomly sorted into four-member teams and once again asked to use ROS to write software for a quadcopter – this time, an actual DJI Ryze Tello. We had some hurdles, but the tasks themselves weren’t too difficult. I had a great team and we were quick to produce results. At the end of the second round, we ended up in second place.

It was a spontaneous decision to take part in the competition, and I do not regret it. I wasn’t expecting much success, so I couldn’t believe it when, at the end of the second round, I found out that I had the most points out of everyone. To me, this victory is proof that I’ve progressed in learning the subject I love and hope to keep working on.

I’ll definitely make use of the opportunities offered by the competition. I’d love to do an internship somewhere, which would be a very beneficial experience. I’ll use the grant money to get a new laptop and invest in the development of the laboratory where I work. I’m also hoping to use my enrollment perks when applying for a Master’s program at ITMO. Next year, I’ll be taking part in the competition again, this time in several tracks at once.

Natalia Zheltova, gold medal winner of the Advertising and PR track, second-year Master’s student at the Faculty of Technological Management and Innovations

The first round is less stressful: you’re at home, with internet access, and the only limit is the time limit. It’s there to confirm that you’re knowledgeable about advertising, PR, and adjacent fields. The tasks weren’t particularly difficult, but some of the advanced ones, like writing a news article, were worth lots of points and determined whether you’d get into the final round. The final round, which took place on-site in St. Petersburg, was stricter: you couldn’t talk to anyone in the room with you or you’d get disqualified. Before the final round, you’re given task descriptions and demos to familiarize yourself with. Most importantly, you need to figure out how to solve these tasks in advance and, of course, remember to be creative.

I have work experience in PR, so tasks of that manner weren’t too difficult for me, but the ones about online marketing – oh, how I’ve struggled with those! CTR, CPM, MAU, banners, monetization – it’s all so over my head, I really had to wrack my brain to solve a huge task that made up one-fifth of the points maximum!

To me, this competition is a chance to prove to myself that my knowledge is my capital. Since I won a silver medal last year, I was sure that this time I’d get the gold.

One of the competition’s biggest prizes is the enrollment perk for PhD program applicants. As soon as the list of eligible universities is published, I’ll start looking into where to apply. As for the money, I still haven’t decided how to use it. Perhaps it’ll come in handy if I have to move cities for my PhD.

Daniel Bobylev, bronze medal winner of the Photonics track, second-year Master’s student at the Faculty of Physics and Engineering

This was my second and, sadly, last time taking part in the competition, as I’m graduating this year, so I already had a general idea of what it’ll be like. The qualifying round it’s particularly difficult – it’s probably just for the organizers to see how serious you are about taking part and whether you possess the fundamental knowledge about your field.

In the next round, the tests become a bit more complicated and creative. This time around I had a bit of luck: one of the tasks was about the 2018 Nobel Prize in Physics, namely optical dipole traps, or “optical tweezers”, which I already knew a bit about from my studies at ITMO.

Last year, I fell just short of the bronze medal even though photonics wasn’t a subject of my Bachelor’s studies. After I spent a year learning about nanophotonics and metamaterials as a Master’s student, my chances of winning grew higher.

Internships aren’t that relevant to me – I already work at the Faculty of Physics and Engineering. Our team is developing structures that permit light to pass through them without scattering, which is a matter of topological photonics. The enrollment perk for PhD programs will come very much in handy this summer. And the prize money will be a contribution to my research – whether it’s to get new equipment or sponsor me in any future internship trips abroad.

Valery Chernov, silver medal winner of the Robotics track, third-year student at the Faculty of Control Systems and Robotics

The competition has three parts: the qualifying round, the finals, and the superfinals. In the first round, we had to solve different math, ACT (automatic control theory), and programming problems. For the finals, we worked on simulated flight path and visual management of different robot types. And for the superfinals, you’d work on drone control tasks, this time in a randomly-assembled team.

I decided to take part just to hone my skills. I’ve been taking part in olympiads for a long time and have had my share of those. I wasn’t really hoping for anything since it was my first time. I especially enjoyed the teamwork: we were able to work well together without any conflict and using a version control system – it was all very relaxed and mature.

I’ll spend the money on equipment for myself and our student club Cyberiada. I am deeply convinced inthe importance of practical knowledge – which, in fact, was demonstrated well during the superfinals, where simulated solutions, the proverbial spherical cows in vacuum, didn’t work that well on an actual robot.

I think this competition is a great experience that also lets you consciously consider the subjects of sustainability, robustness, system identification, noise filtering, and quantitative methods. I think I should probably get some of the latest depth cameras and electromotors to show folks at the club some of the most important recent technologies.

Also, I can’t refuse myself the pleasure of buying some good books. It’s not even about feeling the paper, but knowing that someone’s labor has been paid for. So if there’s a great book that helps you figure out things about some subject or yourself (which is sometimes even more important), you shouldn’t pirate it.

The tasks in the qualifying round were almost the same as last year, and getting into the finals isn’t too difficult – what’s difficult is winning that round. You can’t just complete a task – you must do it better than everyone else.

For the on-site round, I worked on separate hardware- and programming-focused tasks. For the first, you had to connect a Raspberry Pi to various temperature, humidity, and light level sensors – the basics of any smart house or IoT device. In the second task, you had to make it so that all the data is sent to a server and processed, as well as write various scenarios where it would turn on the lights if it’s dark or send a warning if it’s too cold.

I took part in the same track last year, and the tasks back then seemed much more difficult. Winning has helped me understand what I should do next and that everything I’ve done and learned will come in handy. It’s an independent evaluation of my skills and knowledge in a narrow field; and besides, winning always feels nice.

For the finals, the participants had three hours to design and document three systems: describe the algorithms, provide rough database schema, UI templates for mobile and desktop versions of the app, describe the economic benefits, and so on.

I decided I would take part to test my knowledge and, if successful, use my winner’s certificate to apply for a Master’s program. I haven’t thought about an internship yet, as I already have a job. But the organizing team helps participants make their CVs, so perhaps I’ll make use of it yet.

In addition to Daniel Bobylev, the following students were awarded bronze medals:

Pavel Zhdanov, second-year Master’s student, Institute of Cyber Technologies for Financial Systems, Business Informatics track. Pavel holds the record for the number of tracks in which a student has participated, seven in total: he is a prize winner of the Big Data and Artificial Intelligence tracks, a winner of the IoT & Cyberphysical Systems and Management tracks, and a participant of the Programming & IT and Software Engineering tracks.