Have you ever imagined what the 2020s would look like in history textbooks? Do you see us praised or criticized by our descendants? The New Nature exhibition at the Manege Central Exhibition Hall gives you a glimpse of what our time could look like through the lens of history – with AR, AI, and a brand new way to experience art. 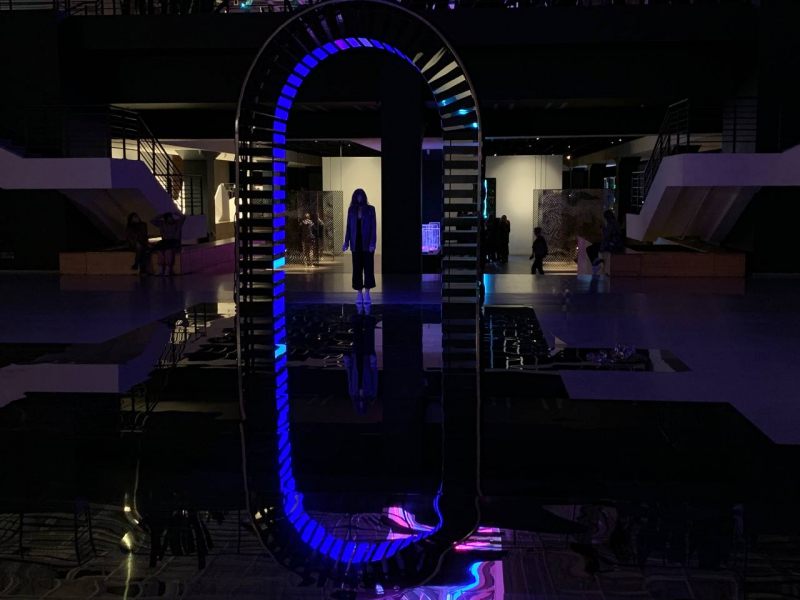 The Manege Central Exhibition Hall is distinguished by its unusual projects and collaborators in the past: take Lee Bull’s Utopia Saved or the NeMoskva exhibition of contemporary artists from Russian regions. This time is no exception – New Nature is a feature exhibition of Recycle Group, a duo of Russian artists, whose works have been exhibited all over the world to major acclaim.

As per usual, at Manege my friend and I were greeted by the surprisingly free space at the entrance – the museum is roomy and always gives you a little sneak peek at what’s inside as you go in. I heard something like distant forest sounds and noticed patterns of white on the walls of the first floor, otherwise everything seemed covered in gloom and darkness. To support this spirit of mystery, in the usual introductory text there were listed the four routes that you could take through the exhibition. We settled on the one with the special app – and stepped right into the unknown.

What’s to be of the digital age?

The exhibition certainly built a lot of expectations, not only by its preview on Manege’s website, but also by the major spectacular piece that welcomed you in (see the cover image). A glowing arc made of servers, which reflected from the water-like metal surface on the floor, turning into a large zero. After we scanned the QR code for more info, we learned that it was meant to symbolize digital immortality, everything and nothing at the same time. Information is “immortal,” though it’s nothing but zeroes and ones stored on countless servers. That was definitely an intriguing start to what followed next on the first floor.

The right wing of the space was devoted to reliefs meant to resemble those of Ancient Greece, though at the same time as if not fully loaded, with only their polygons outlined. People in togas made of wires, robots with their heads connected to a system of cables, some still movement, maybe even yet unknown battles… Some of the more “classical” pieces exhibited, those also turned out to be the most thought-provoking. What will our reliefs look like and what are we leaving after ourselves apart from bytes of data?

This train of thought was picked up neatly by the garbage bins turned sarcophagi. It was particularly painful to see those pharaohs of the digital age captured with the phones in their hands, their noses buried in the screens – and then seeing everyone around, myself included, busy essentially with the same thing. But more on that later, it’s time to move on to the new technologies you could interact with at the exhibition!

AR, AI, and the magic app: was it all worth it?

At the very center of the first floor there was a great cube with two glowing doors – and one giant line of visitors curious to see what those doors led to. Standing in the line, we had enough time to learn that in the room was a special AI setup that would use our images from social media to make a personalized prediction of our futures. We were to choose only the way it would go, almost like Neo stepping into the Matrix. Though our choices were only limited to a highly positive or a downright negative scenario. Needless to say, I chose the former (though my friend opted for the latter).

After a very long wait, I finally got through the door (each of us went separately) and I was ready for if not a transcendental experience, then at least a revelation about my future. What I saw was neither of those – but a whirlwind of photos (some of me, but most not) with a synthesized woman’s voice ensuring I would live in a world of happiness. Quite an underwhelming experience, one could say, and definitely not worth the long wait it was preceded by. It could be worth it if you have a full page with loads of pictures available: they may be enough for the AI to base its prediction upon. For me, however, it seemed like your typical palm reading.

This disappointment, however, was soon redeemed by the AR exhibits in the left wing. When I saw the first one through the app – a Facebookian, the man of the new age, I thought it was time to start believing in magic. Later on, seeing transparent moving people where a second ago was nothing but thin air only supported that belief. As we moved on to more complex pieces, though, the novelty wore off, and it became harder to catch the exhibits at the right angle for the app to work properly. Though it was still fun and fascinating to see neon people coming out of walls, thus breaking through information barriers, it was hard to think about any potential deeper meaning behind the pieces: it was overshadowed by the appeal of new technology.

A major part of the second floor was taken by the Forest of Expired Links: literal palms made from plastic with links printed on them. It was somehow peaceful and relaxing to go through it, surrounded by sounds of chirping birds. Though when you stopped to think about the amount of lost pages and produced information, it sent a rather unpleasant chill down the spine.

And we were made to stop and think right at the end of the exhibition: at a sand pit with several giant stones in its corners. The description read that the stones were moving and urged us to come in sync with their time. It could’ve been a trick, for I didn’t notice any of them move, but I appreciated the meditative state of mind brought by the exhibit nevertheless.

As we stepped out of Manege, it was somehow inexplicably weird and pleasant at the same time to see the real world. My hand was tired from constantly holding my phone at the ready – and it was nice to not have a QR code I needed to scan before interacting with something.

That made me think of the paradox of this high tech exhibition. The images and ideas sparked by the pieces sometimes seemed to be a commentary on how much data we create, how much we unnecessarily stay on our phones. And yet the visitors were made to be glued to their screens all the time, because otherwise they wouldn’t have been able to get the full experience.

For me, museums are usually the place to get into a new reality: the one I access without my phone, the one that exists outside of it. This time, as the phone became part of the exhibition, to a certain extent, I almost had the urge to leave it there – life is not an exhibition. But maybe it is? Maybe the artists were trying to say that everything we do digitally is how future generations will remember us – and thus could potentially be part of some exhibition, say, of pictures excavated from the vast amounts of accumulated data?

Though my first AR museum visit was not the smoothest one – and the AR pieces themselves didn’t seem to convey a deeper message the moment I saw them, the whole experience did move me. The uncertainty of our future, the digital problems of our present, and the blended nature of our reality have never stood out so clearly as the core defining features of our time.

If you are curious to experience New Nature for yourself, check out Manege’s official website for details. And remember that you can always find the best exhibitions, shows, and events happening in St. Petersburg in our weekly guide.