While the weather gives us the last chance to enjoy the colors of the fall, join us on a walk around the island of the greatest potential in the city, now a sanctuary for yachts, skaters, and soon-to-disappear traces of past centuries. 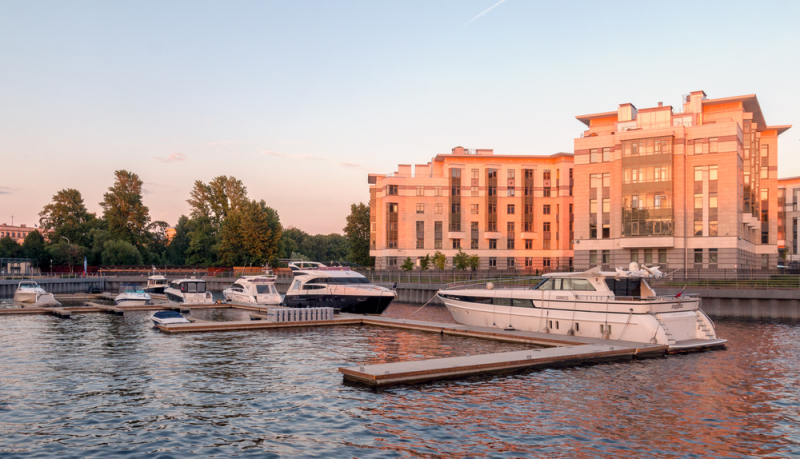 The small, elongated Petrovsky Island sticks to the Petrogradsky one so closely, it took me five years of exploring the city to even realize it’s a separate thing. But it is, and its life goes its own way! Take a short walk and you'll be charmed both by its quietest nooks and top spots for extreme activities.

Let’s start with the island’s one and only avenue. Like Krestovsky Island (that's where you go for a bike ride with the rector), Petrovsky is a venue for the most luxurious real estate in St. Pete, but there’s one difference: it is still a work in progress. Walking down the prospekt, you’ll see gracious apartment buildings peacefully neighboring wooden dachas or abandoned factories that ruled the land centuries ago. There are ruins of the Hoth Rope Factory, with the owner's mansion still intact and even restored. At the far end is an example of Classical architecture – a yellow palace built at the beginning of the 20th century for retired actors. And all of that is surrounded by modern glass and brick!

You’ve probably seen the freshly-built Betancourt Bridge connecting Vasilyevsky Island and the Petrogradsky Side. But have you ever wondered what’s under it (besides water, of course)? A huge skate park! The 1,200 square meters of concrete and elements with tricky names soon became a hotspot for skaters, BMXers, and scooter riders, united by their passion for extreme sports. Extreme doesn’t mean dangerous, so you can freely walk around and take a seat in the recreational area, checking out tricks performed by thrill-seekers of all ages. If you’re not a fan of kick turns and backsides, the place is worth visiting just to get a boost from its lively atmosphere.

The only park on the island can’t compete with the majestic gardens of St. Petersburg – it’s simple, modest, and quiet, and that’s exactly what makes it a perfect spot for relaxing and enjoying fall. There are a couple of bridges to cross, some lanes to walk, and pines to get lost in. But even away from the noise, there’s a place for unusual activities: its small lake features a wakeboard park.

You’ve reached the final destination: the island ends, and water begins. As a reward, you get picturesque seaside views of Gazprom Arena, Lakhta Center, Vantovy Bridge, and Vasilyevsky island from an unexpected angle, and all of that in the company of dozens of yachts and sailboats. Historically and until now, this area belongs to the St. Petersburg River Yacht Club, established in 1860. So vessels aren’t idle here as they are constantly used for competitions, training, or leisure. By the way, look sharp while strolling here: there’s a chance to meet ITMO University’s Sailing Club exercising!