Surviving a Hot Day: Beaches in and around St. Petersburg

It’s the middle of July, and it finally feels like summer in St. Petersburg! After almost two weeks of recurrent rain, we now finally get to enjoy some hot weather, so thinking about dozing off on a beach or even plunging yourself in the nearest pond is only natural. With that in mind, we’ve prepared a quick review of different swimming spots that you’ll definitely find useful! 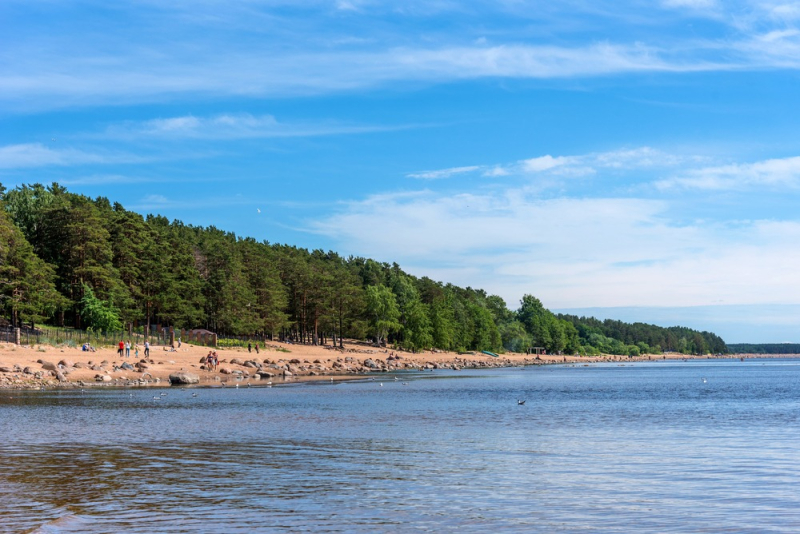 Despite its location on the seaside, any local would tell you that St. Petersburg stands on a swamp rather than a beach. What is more, the local water isn’t exactly clean, and the Federal Service for the Oversight of Consumer Protection and Welfare strictly forbids swimming anywhere in the city (or the Oblast, for that matter). Still, the ban is often ignored, and lots of people try their luck at a few popular spots.

The oldest and arguably the most popular of them is the beach of Peter and Paul Fortress. Strangely enough, this is also one of the few swimming spots that attracts people throughout the year. Almost every morning, you can see people “tempering” themselves with water, and in the midst of January, it gathers hundreds of people during Epiphany Day.

Another traditional spot is located not far from Ozerki subway station, which is named after the nearby three small lakes. Despite their size and location, they are very popular among locals and get jam-packed every time the weather gets hot.

Finally, there’s the 300th Anniversary Park, which is probably the only proper beach within the city limits. Though swimming there is also advised against, there are many other activities: bike and segway rental, beach volleyball, etc. A great view of St. Petersburg’s passenger port and close vicinity to different malls make the place an even better option for weekend activities.

Beaches on the Gulf of Finland

Still, going for the swimming spots in St. Petersburg is more of a desperate choice; in order to truly enjoy yourself, it is much better to leave the city. In this respect, the most popular destinations are the different beaches on the Gulf of Finland.

The best spot on the southern side of the gulf would be the one in Alexandria Park in Peterhof. Apart from being one of the most beautiful local beaches, it is close to many other Peterhof sights, which makes this destination almost ideal for a single day’s trip. On the other hand, swimming here is strictly forbidden, and the place is just too “civilized” to make the most of lazing around on the sand.

For those interested in the latter, there are numerous places on the northern side of the gulf. Beaches near such places as Sestroretsk, Zelenogorsk, Repino and Komarovo are considered best; you can get there by taking a train from the Finland Station or by various marshrutkas that depart from the Chernaya Rechka subway station.

Another great idea would be going for the beach in Vyborg, which is amongst the few spots where swimming is officially allowed. The place offers boat rental services, and you can save a lot of time by taking a fast train from the same Finland Station.

The Vuoksi River doesn’t have much in the way of beaches per se, but it’s a great choice for anyone who prefers adventure over plain lying in the sun. Famous for its many islands and rapids, it makes an ideal place to go on a boat trip, try fishing or kayaking. Though a bit cold, the river’s waters are much cleaner than those of the Gulf of Finland, which makes it ideal for swimming, and there are numerous picturesque spots where you can camp, enjoy sitting near a campfire, or take a hike.

The best way of getting to Vuoksi is by taking a train to the town of Priozersk, or the nearby Sinevo railway station. Both places have boat rental services.

Lastly, here are some general tips for you:

We wish you best of luck! Yours truly, ITMO.NEWS.