The Magic of: White Nights

White nights – a brief period from May to July when it doesn’t get totally dark at night – could be considered St. Petersburg’s calling card. The Russian poet Alexander Pushkin famously described this time as “one dawn is in a hurry to replace the other, giving night just half an hour.” But what’s it like if you live here? Breathtaking? Annoying? We asked around. 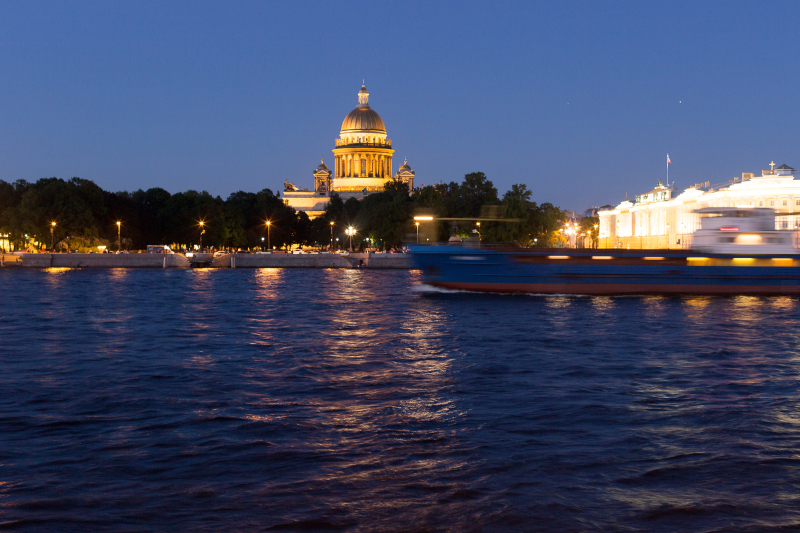 To me, white nights mean the first kiss, the first card with the drawbridges timetable (no internet or cell phones back then), the first climb up a winding staircase to take in the view of St. Isaac’s Cathedral against the cobalt sky. It’s about friends getting into a little boat for a midnight canal excursion after a night of heavy partying and the adventures I missed out by refusing to join them. It’s about learning to dance salsa in the park with a boy from Cuba. It’s about enjoying ginger tea in an outside cafe and discovering that the person you thought was your boyfriend checked expiration dates on shampoos, and walking out of there single. It’s about sharing their magic, or keeping it all to yourself.

I have a love/hate relationship with white nights. On the one hand, it’s the best, because the weather is warm and you can walk around the city till late and it’s beautiful and bright and not scary at all. I love to walk from Nevsky Prospekt to Petrogradsky Island, along the bridge after work, it’s stunning! On the other hand, I get no sleep during the summer. No matter how thick my curtains are or if I make use of an eye mask, I still wake up super early and don’t get to sleep till late. But hey, I stocked up during the winter, so it’s all good!

I have a pretty weird relationship with white nights. For starters, I didn’t really know that they were a thing until I moved to St. Pete at the age of 18. Having grown up in a northern Russian city where the nights are always light in summer, I accepted this as the natural order of things and didn’t think that it could be otherwise (I still remember how surprised I was when I first traveled to the Black Sea with my parents; I was six and the main thing I learned from that trip was that “the nights in the south are so dark that you can even see the stars”). However, no matter how accustomed I am to white nights, I still can’t help but see them as the most magical time of the year (yep, even more magical than Christmas). For me, it’s all about walking till it’s late, riding a bicycle near the Peter and Paul Fortress at 11pm, and just living my life to the fullest!

White nights are kind of a “meh” thing for me personally, in the sense that I don’t give two hoots about whether they’re there or not. Sometimes I even find that they prevent me from sleeping, and that doesn’t sit well with me as sleep is pretty much my religion. All this being the case, I can’t really think of anything special I love to do when the white nights period commences, if dusting off my sleep mask and doubling my valerian root consumption (it’s legal and I’m over 18 so don’t call the cops) don’t count. I guess you can go and sit beside the water on the Quay with Sphinxes, if you must go outside. But why do that if you have new seasons of Fleabag, The Handmaid’s Tale and Luther coming out, you know? It beats me.