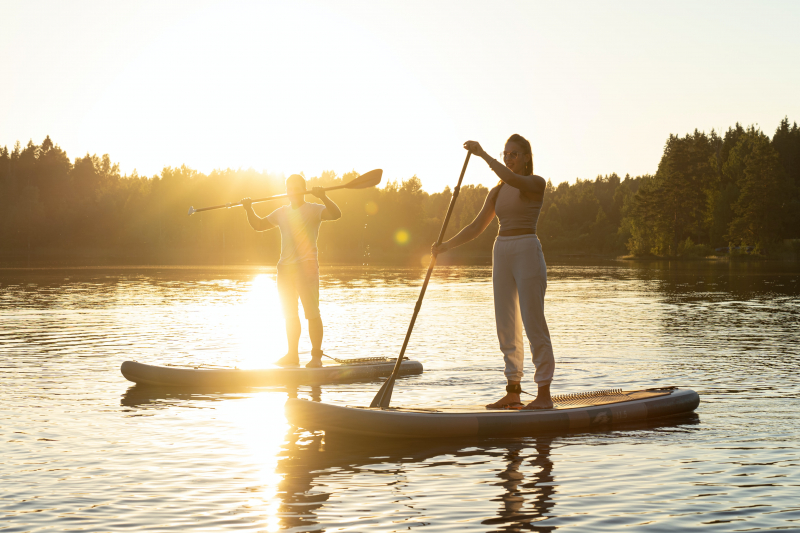 Fontanka-SUP is one of the largest SUP (standup paddleboarding) carnivals in Eastern Europe. This year’s festival will see scores of sportspeople from the world over compete not only in their paddleboarding mastery but also the originality of their costumes: it’s only on this day that you’ll see Garfield the Cat and Hulk trading their tools of the trade for a modest water paddle. Sprawling over 8km of rivers and canals in St. Petersburg’s historic center, the route runs under 14 city bridges.

Organized by the social network VK, VK Fest is a grandiose music festival featuring the artists most favored by the network’s users. The spacious line-up consists of several dozens of music big names, including Little Big, Tesla Boy, Diana Arbenina, Nochnye Snaipery, Elka, Delfin, The Hatters, LOUD, Luna, A’Studio, Monetochka, ATL, and many others. The program also includes lectures and talks by prominent bloggers, artists and public figures, as well as educational workshops and a food court. The full program is available here.

One of the finest landscape parks in Europe, the Pavlovsk Park will soon be turned into the magnificent kingdom of flowers! This year’s Imperial Bouquet Festival is dedicated to the celebration of the Year of Theater in Russia. Take a stroll through the park, gaze at exquisite floral sculptures, paintings, art objects and even dresses made of flowers by local florists, participate in a Venetian carnival, watch plays performed by actors from the Mikhailovsky and Mariinsky Theaters, and take part in workshops on making bouquets and flower wreaths.

Want to learn more about Impressionism and its greatest painters? Head to the Etagi creative space, which is currently hosting an exhibition about the roots of this extraordinary movement, its place in the history of art, and its most renowned figures.

Ah, to spend a weekend in Paris, we bet you are thinking wistfully. But wait, you can: for three days, a small spot on Fontanka River Embankment will turn into a lookalike of the august River Seine with its abundance of little bouquiniste booths on its picturesque shores. Books is the only name of the game, sadly: you can swap them, inspect them, buy them, talk them, and learn about them, but there is no wind of the sumptuous Parisian wine and baguettes. Tant pis pour baguettes-obsessed nous, then. The fair is organized by KGallery art and books shop together with St. Petersburg’s finest booksellers.

Presenting the creations by cinematographers and video artists working at the intersection of artistic practices, MIEFF’s main goal is to contribute to the development of experimental cinema. The festival will be broadcast on the New Holland island, its program including selected films from its competition and non-competition programs. Films will be screened in their original languages with Russian subtitles. The full program is available here.

A Dream of Italy. The Marquis Campana Collection

A joint effort by the Hermitage and the Louvre Museum, the exhibition is based on the star-studded archives of Marquis Campana, known to the 19th century’s largest private collection. Including archaeological objects, paintings, sculptures, and objets d’art from Antiquity to Modernity, the collection had a tragic fate: Marquis Campana, who was in charge of the Papal pawnshop Monte di Pieta, was accused of embezzlement and his collection was put up for sale by the Papal State. Most of it was acquired by the Russian emperor Alexander II for the then Imperial Hermitage Museum and by the French emperor Napoleon II for the Louvre. The exhibition now brings these two parts together.

Curated by the staff of the Iskusstvo Kino (The Art of Cinema) magazine, the Weekends of French Cinema festival features the crème de la crème of the aforementioned. The program for this weekend includes Casque d’Or, a wild mix of crime, romance, and drama set in belle époque France (tickets), and Madame De…, a dramatic masterpiece of the 1950s French cinema (tickets) for July 20, and Les Demoiselles de Rochefort, Jacques Demy’s iconic musical from 1967 (tickets) for July 21. The films will be screened in French with Russian subtitles.