Red-brick industrialism meets wall-size murals, eateries for every taste, and of course, music and performances, at this newest seaside addition to the St. Petersburg hip scene. 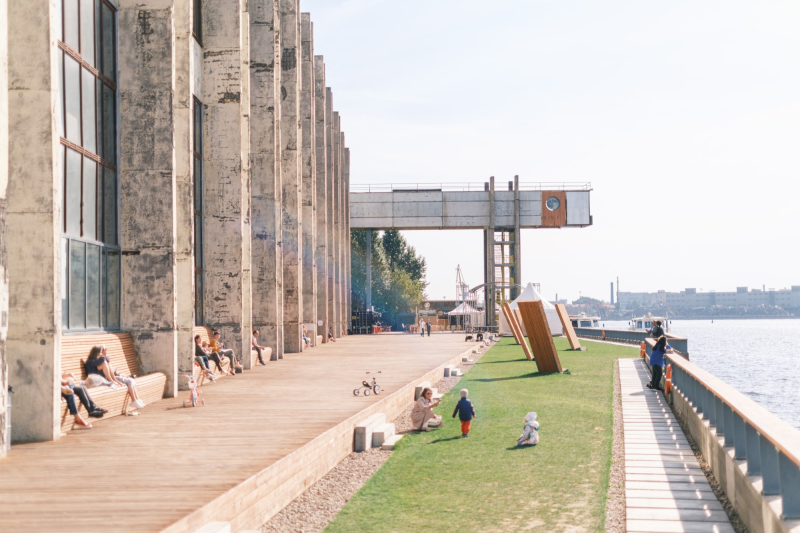 When I asked a friend about Sevkabel Port, a historic plant-turned-creative space on Vasilievsky Island, she said that she’d never been there in the daytime. It already has a reputation for hosting some of the highest-profile electronic and jazz music festivals and, yes, raves. But now that it’s open during the day, it’s making strides towards becoming “a place of power” for the “young thinking people.”

There’s no escaping the fact that it’s not all pretty. Its roots as a 19th-century Siemens & Halske plant that manufactured electrical cables are well evident in the industrial architecture – some inspiring in its authenticity and some clearly in need of restoration. After all, most of it is still a functioning plant that churned out some 49,000 km of high-voltage cable last year. Sprawling murals, a wooden promenade, and splashes of color in design elements and art installations add modern flair and a whole new level of artistic, social and monetary value.

That’s what’s cool about this scenario: it’s not a developer turning a bankrupt plant into a fashionable creative space. It’s a plant itself tapping into a new potential of its prime waterfront real estate and industrial design.

The residents are an eclectic group united by their appreciation of Sevkabel’s unique urban vibe. A pop band IOWA is taking advantage of the acoustics of a former plant building for its studio. Artsy shops, such as Kookaburra, which upcycles 1970s clothing, rub shoulders with yoga and fitness studios like FLYBY where you can stretch and learn to fly Cirque du Soleil style. Go kosher at Easy Hummus or let your inner vegan run wild at Grün. Burgers and barbecue are on hand, too, for the hungry crowd that frequents the electronic music clubs.

It would be easy to say go check it out in the summer because, after all, the promenade, with its wonderful vista of the Gulf of Finland,  is such an inviting space for soaking up some sun. But the truth is, and given the summer that we’re having, its true spirit is the sea breeze mixed in with the rain, overcast skies, and hands wrapped around a cup of excellent coffee. All that against a historic backdrop. Just like St. Petersburg itself.