There are lots of beautiful monuments in St. Petersburg, and much can be written about such famous sights as the Bronze Horseman or the Alexander Column. But this time, we’d like to focus on the smaller things – the ones that might be hard for you to notice, and when you do, make you laugh or wonder what the hell they are. 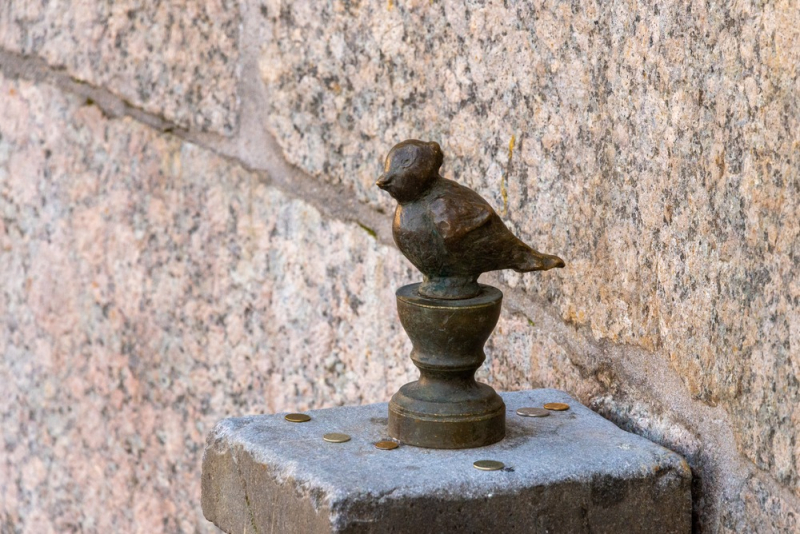 Arguably the most famous (as well as one of the tiniest) of St. Petersburg’s smaller monuments, this miniscule statue of a bird (a siskin to be precise) is perched on the embankment of Fontanka river near the First Engineer Bridge. Though relatively new, the monument is associated with a19th century verse, its more or less literal translation translation being:

Siskin-wad, oh, where were you?

On Fontanka drinking was:

It was spinning in my head.

Supposedly, the students of the Imperial School of Jurisprudence that was once located nearby wore uniforms that resembled the colors of a siskin, and were regulars at a nearby taphouse. For whatever reason, the verse has become really popular and is still known by most St. Petersburg citizens, which eventually led to the creation of this monument. Another fun fact is that the Siskin has been stolen several times over; as the urban legend goes, every time, the robbers sold it to buy booze.

Another pair of strange statues located nearby are Mikhailovsky Castle’s Tin Soldiers, which are but one of the place’s numerous mysteries. These small fellows stand each in their own niche in the castle’s wall overlooking the moat, and are really hard to notice. No one knows for sure, but it’s believed to portray one of Emperor Paul’s soldiers - according to a legend, he had a vision of an angel ordering him to tell the Emperor to build his castle in that very place and name it after the Archangel Michael. The small statue is said to be able to predict the future, but no one ever specified how.

A memorial plate with a huge nose may seem strange to anyone but a St. Petersburg citizen (or any well-read Russian): this odd monument is dedicated to the character of Gogol’s surreal short story The Nose, a nose that’s abandoned its owner to lead a separate life, eventually surpassing its host by attaining the rank of State Councillor. Though initially a temporary installation for the 1995 International Festival of Satire and Humor in St. Petersburg, the monument became so popular that, after its disappearance, a near-identical replica was installed by popular demand.

A monument that holds much significance despite its size is the Kolushka monument in Kronstadt. Though similar in name and appearance to korushka, a famed St. Petersburg delicacy, kolushka was never even considered edible save for the Siege of Leningrad, when fishing for kolushka helped save many lives from starvation.

Another statue associated with gratitude and sadness is the St. Petersburg Angel, a figure of a winged old man sitting on top of a bench in the Izmailovsky Garden. The statue commemorates the older generation of St. Petersburg citizens who survived the many hardships of the 20th century and yet remained kind and gentle. A small ritual associated with the statue involves placing coins on the angel’s knees as a sign of gratitude.

Though дворник generally translates as “groundskeeper” or “street sweeper”, it is a much more complex a term which I believe to be essential for understanding Russian literature and jokes, and will eventually turn up in our Speak Like a Russian articles. This particular statue is based on the main character of a one-of-a-kind Soviet claymation cartoon, Last Year's Snow Was Falling, which makes the monument totally adorable for anyone who’s ever watched it – and which I totally advise you to. ​

Monument to the Invisible Man?

Finally, this simple monument is not a statue but the absence of it – and that’s what makes it so curious. For some, this empty pedestal near the Obvodny Canal is a monument to the Invisible Man; for me, it's a Monument to Conceit, as climbing it to have their picture taken is a usual reaction for most. The truth is quite simple: it is just an empty pedestal from a monument to Emperor Alexander II which was removed somewhere around 1931 – but hey, all the mystery associated with the place makes for great stories!

These are only a few of St. Petersburg’s smaller sights - and, frankly speaking, I can’t even hope to write about all of them. So, next time you’ll be walking around, keep your eyes open, as you can stumble upon many more oddities and curiosities just around any corner of our city!