The ancient city of Veliki (Great) Novgorod offers a trip back in time and a taste of Russian culture and cuisine a few hours away from St. Petersburg. 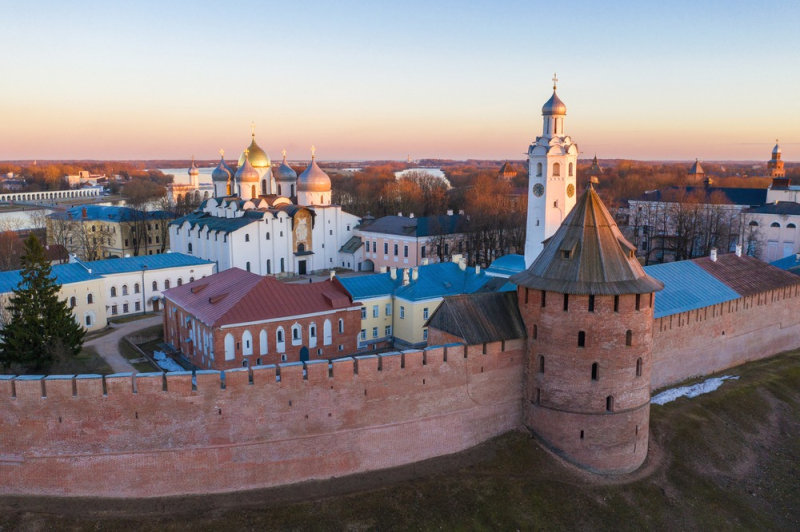 The first time my grandparents brought me to Novgorod for May holidays, I must have been around six or seven. I remember the monumental Kremlin walls, covered in orange moss, stout white churches, and that spring scent of cut grass and rainstorm. And the fact that I almost got left on the other side of the Ilmen Lake, but that’s another story.

I have been back many times as an adult, and every time have found something delightful, be it the outdoor museum of Russian culture and crafts or delicious honey drink served in a restaurant in heart of the Kremlin.

One of the oldest Russian cities and part of UNESCO heritage, Novgorod was first mentioned in year 859. It’s proud of its history as an early republic where “veche,” or the gathering, ruled on important issues by voting as early as in 12th century.  In the 15th century, Novgorod and its lands join Moscow as part of Russia and it continued to keep its importance in trade routes between East and West.

There’s a good chance that the first thing you’ll visit in Novgorod is the Kremlin. This ancient fortress is fun to explore whether you feel like climbing to the top of stone walls and towers for a view of the surroundings and the Ilmen Lake, or spending some time in the museums exploring the city’s history and Russian culture in general. Its crown jewel is one of the oldest Russian orthodox churches – St. Sofia Cathedral - dating back to 1045 and home to several famous, and some say, miracle-making, icons. Even if you’re far from the Russian Orthodox religion, it’s worth the visit for its architecture, beautiful frescos and that indescribable feeling of connection to something greater.

Depicting key characters in the country’s history, the monument to Russia’s 1000-Year Anniversary, also on the Kremlin grounds, is a fantastic visual way to travel through the ages.

If you’re in town for a weekend, consider spending the second day at the nearby Yuriev Monastery and Vitoslavlitsi, an outdoor museum of wooden architecture.  They’re both about 15 minutes by bus N7 and N7A  from downtown.

One of the oldest Russian monasteries, Yuriev Monastery dates back to 1119 and blends ancient Russian orthodox traditions and 19-century architecture. Its signature is the cathedral topped with blue domes with golden stars. On a hot day, it’s also a great place to enjoy an afternoon on the beach.

Vitoslavlitsi outdoor museum features historic wooden buildings, ranging from ordinary homes to beautiful churches, all made out of wood and many without a single nail. It’s a perfect place to step back in time and enjoy Russian country life was like, complete with traditional outfits, songs and crafts. On a hot day, you’ve got to try a traditional non-alcoholic drink “kvas” made from rye bread. The museum is open from 10 am till 6 pm and closed on Mondays. What to take home

Walking around Novgorod, not to mention Vitoslavitsi, you’ll have plenty of opportunities to by traditional wooden and birch-tree bark crafts. A breadbasket purchased has lasted me over almost two decades and is still going strong.

Another great souvenir is pryaniki – or a local version of gingerbreads. They come in a variety of shapes and sizes and often have delicious fillings, such as honey or fruit jam. The biggest challenge is actually saving them for their intended recipient. The easiest way to get to Veliki Novgorod is by train – check timetables and tickets, or by bus from multiple places around the city. You might also consider a bus tour, many of which leave from Gostini Dvor.