An ancient Russian stronghold, Pskov offers a fascinating trip to the times of knights and hermits made easier with the introduction of a fast train service from St. Petersburg. 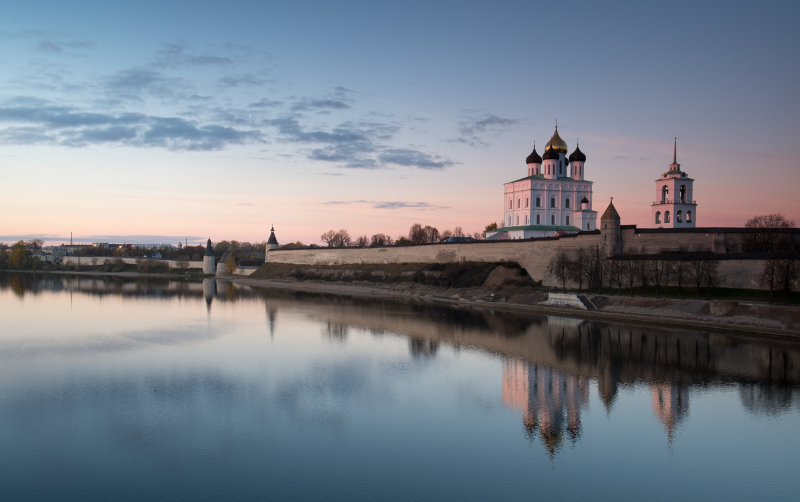 Dating back to 903, Pskov is arguably one of the oldest Russian cities. It’s perfect for shooting a historic movie complete with knights besieging a fortress and church bells ringing the alarm.

The landscape that spreads across the river delta and the rolling meadows call for music by Rachmaninov.

At the same time, Pskov has always been on the western border of Slavic lands, and even now it’s just 30-minute drive from Estonia. Somehow, it manages to blend the Russian and the European vibes.

The heart of the city is the Krom (Kremlin), a 13th-century fortress with massive boulder walls. Towering over two rivers, it was deemed impenetrable by numerous invaders and only fell twice - to the teutonic knights in 1241 and to the Nazis in 1941. It’s not a particularly large kremlin, especially compared to that in Novgorod, but impressive nevertheless.

Inside, spend some time admiring the Trinity Cathedral and wandering around the ancient Dovmontov Settlement. The excavated foundations of churches and other buildings make it easy to get into the spirit of the time (and appreciate your spacious studio apartment).

Pskov has always been an important religious center and even now the monasteries around it attract many pilgrims and tourists. Churches big and small, dating centuries back, restored and unrestored, seem to be part of every photo. Watch for the local church design trademark - “the Pskov Necklace” - a carved feature around the very top of the dome.

My personal favorite monument in Pskov is to Princess Olga, the local lady who married Igor of Kiev and became one of the most influential women in Russian history. I think it’s fun when a woman can put a city on the map.

During summer months you might even catch a battle in action. Ever felt like swinging a sword?

Situated about 30 kilometers southwest of Pskov, this town is even more ancient, dating back to the 7th century.

You won’t find cobblestone embankments and brightly painted houses here. It’s a true rugged fortress with walls you can climb (but at your own risk!). Pagan shrines mix with Orthodox churches. Someone wearing a traditional Russian costume or engaging in crafts wouldn’t be out of place here.

One of the most accessible ways to get to Izborsk is by bus from the main railroad station in Pskov. Make sure you’re traveling to Old Izborsk because New Izborsk is the actual town, not the fortress.

At the opposite end of the color spectrum is the Pechory Monastery, filled with azure blues, terracotta browns, and of course, lots of gold.

A functioning men’s monastery, it was founded in the 15th century by hermits who settled in the area’s deep caves. You have to be with a tour to visit some of the “farther” caves, which contain ancient remains, but some of the “closer” caves are accessible to the public.

The monastery can be very crowded with pilgrims, but even if you couldn’t be further away from their beliefs, it’s neat to experience a working monastery that’s also an architectural delight.

Know Before You Go: