Modern, compact, and very green, Helsinki is the closest European capital to Russia and a nice place to take a break from the hustle and bustle of St. Petersburg! 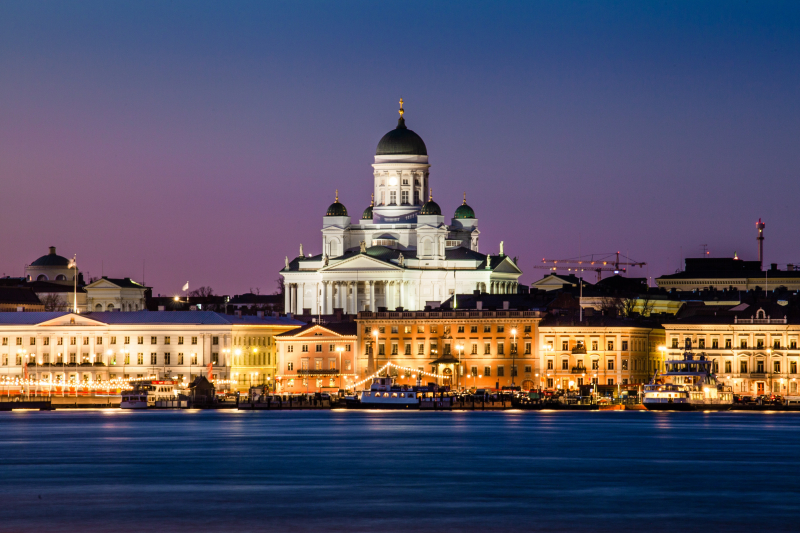 "Helsinki is most of all synonymous with tranquility, functionality and good everyday living," says Minna Parikka, a shoe designer from Helsinki, and I stand by every word: its numerous parks and gardens, a modern and efficient public transport system, and stunning architecture make Helsinki a very comfortable city both to live in and to visit. The only thing that’s missing is good coffee, but maybe the locals know some secret coffee places which I’m not aware of. So if you’re anything like me and enjoy hiking, architecture gazing and the sea breeze, here is a list of things I find the most exciting about the city and hopefully you will too.

At the turn of the 20th century, Art Nouveau flourished all across Europe, and Finland was no exception. This movement became associated in Finland with the fight for national independence and found a special expression in the National Romantic Style. Seeking inspiration, architects turned to Nordic legends and early medieval architecture: tall stone towers, granite façades, fortress-like shapes, and folklore motifs…

If you travel by train, which I recommend as the best way to get to the capital of Finland from St. Petersburg, the first thing you see is the Central Railway Station. Clad in Finnish granite and featuring a clock tower, it is one of the most extraordinary buildings in Helsinki. But the cherry on the cake are the four granite giants holding the spherical lanterns lit at night, referred by the locals as the stone men. The building is so astonishingly lovely that it was even chosen as one of the world’s most beautiful railway stations by BBC in 2013.

Just a minute's walk from the station is the Finnish National Theatre, a grey brick building with a striking red roof. Richly decorated with floral ornaments, arched windows, and columns, the building resembles a Medieval castle, though it is only a little bit more than 100 years old.

If you stroll down Aleksanterinkatu, colloquially known in Helsinki as Aleksi, you will notice a massive grey building with a green tower with a pine cone-shaped roof. It is the former headquarters of the Pohjola Insurance Company and a prominent example of Finnish national romantic architecture with façades made of rough-hewn soapstone decorated with floral and folklore motifs, such as sculptures of vegetation, squirrels, owls, trolls, bears (by the way, bear sculptures are very popular in Finland, much more than they are in Russia) and figures from the national epic Kalevala. This abundance of ornamentation will definitely take your breath away!

Tip: to learn more about the Finnish Art Nouveau architecture, visit a tourist information office: they have great detailed maps of walking routes through the city center.

I wouldn’t say that the grass in St. Petersburg is not green enough, but in Helsinki, it is definitely greener. More than two dozens of parks and gardens make Helsinki one of the greenest cities in Europe. Among my favorites are the Esplanadi Park, colloquially known as Espa, a relatively short alley situated right in the city center near the Market Square; Kaivopuisto, a big, sprawling park  that offers a great view over the harbor and the sea; and the Sibelius Park, located in the district of Töölö, just a stone throw away from the sea, named after Jean Sibelius, Finland’s most famous composer, and home to one of the most unusual monuments I’ve ever seen.

But most of all, I love the Kaisaniemi Botanic Garden, a true gem unknown to most tourists. It is situated about half an hour walk away from the Central Railway Station and it’s open to visitors all year round, free of charge. I first visited it in March, when the weather was still chilly and rather unpleasant even to my taste, and I was astonished by how nice the place was. I wouldn’t describe it as a "tropical paradise" as many tourist guides do, as it is pretty small and there are not so many tropical plants displayed there (especially compared to St. Petersburg Botanical Garden) but it definitely has its charm. What surprised me the most was seeing people having picnics right in the greenhouses, surrounded by plants and flowers. So take your friends with you, bring something delicious, grab a seat at one of the benches and enjoy!

If you don’t mind a longer journey, consider visiting the Suomenlinna sea fortress. Suomenlinna, meaning the Fortress of Finland in Finnish, stands on six islands and can only be reached by sea (a 15-minute ferry ride from the Market Square with ferries departing every half an hour).

With its mysterious tunnels, picturesque rocks, grassy meadows, and clean beaches offering lovely views over the Baltic sea, the island is the perfect place for escaping from the bustle of the city and enjoying truly Scandinavian nature. Don’t forget to take a map of the island at the tourist information office situated near the ferry pier, as even though the island is relatively small, it’s pretty easy to get lost.

A little tip: if you plan to visit Suomenlinna (and even if you don’t), buy a day-ticket. The simplest way to purchase it is in R-kioski, a chain of convenience stores, that you can find all over the city. A one-day ticket costs 9 euros and works on buses, trams, metro and the ferry to Suomenlinna. It is very handy if you need to make several journeys during one day, as it can save you a pretty penny. Besides, a day-ticket is a great opportunity to experience the Helsinki transport system which is really comfortable (I’m a big fan of their trams; they slide).

To learn more about Finland in general and how to get there from St. Petersburg, read our article.