We’re halfway through autumn, and it seems that we won’t be getting any late warmth or “sun-lit, golden leaves under a clear blue sky” type of scenery (though I really hope that I’m wrong). Well, don’t you worry! Fall in St. Petersburg is not just about the endless rains, but also sludge, sulk, and an occasional runny nose – the things that will be the topic of today’s Speak Like a Russian article. 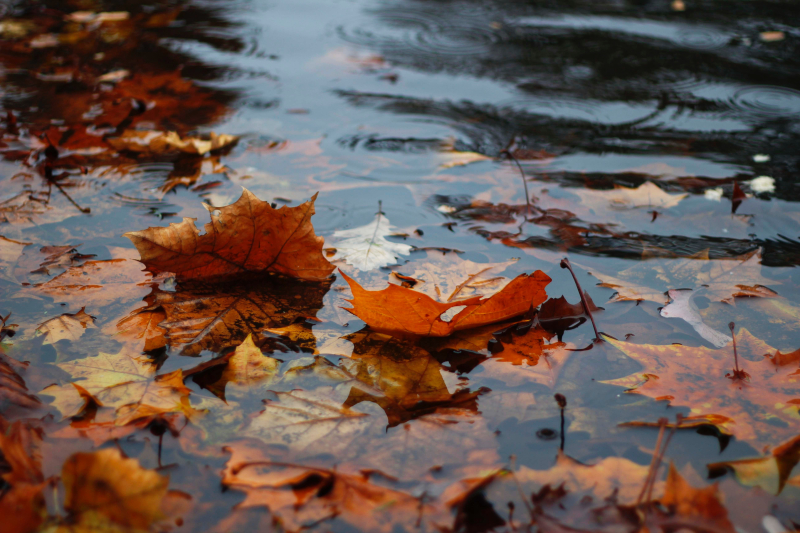 To begin with, let’s pour one out for what we never really had this year – the Indian summer, which is called Бабье лето (bab’ye leto, “women’s summer”) in Russia. Tge period from mid-September to early October is usually associated with high hopes for good weather and exquisitely beautiful scenery. As for the strange name, there’s no good theory on it save for the one that has to do with astrology, namely the Sun being in Virgo, which doesn’t sound very reliable as astrology has never been really popular with the Russian common folk.

Бабье лето is followed by a quick золотая осень (zolotaya osen, golden autumn), a meager couple of weeks till the time when trees shed their leaves completely. Then comes the time for what autumn really is in St. Petersburg, something that makes you wish that winter was already here. As we have already covered the various types of rain in another article, allow me to focus on what else the local autumn has in store for you.

Слякоть (slyakot) is sludge, and it’s coming to stay. From late October till the end of spring, the roads get covered with it way too often. Mushy, sticky and often freezing cold – it makes walking the city a feat that not everyone can accomplish. Don’t forget to get some rubber boots, cause you will definitely need them!

You think you’d be better and safe indoors? Wrong! Сквозняк (skvoznyak) is a draught, though it’s better to use plural skvoyznyaki – as such an old, beautiful city with this many historical buildings as St. Petersburg… is just full of them. Be on guard – otherwise, your companion for the next few weeks will be nasmork.

Насморк (nasmork) – is the condition of having a runny nose, which can well be called the third rider of the Russian Autumncalypse. Soon enough there’ll be ads of all kinds of nasal sprays all around, people wearing surgical masks in the subway, and there won’t be a day when you won’t hear someone sneezing. So, stock up with cold remedies, wrap yourself in yet another scarf and remember that the Russian equivalent for “bless you!” is “будьте здоровы” (budte zdorovi, stay healthy).

While sludge, drafts and a runny nose is more than enough if you ask me, there’s one final malaise that you should be aware of. Take two parts of sorrow, add one part of melancholy and season it with a feeling of hopelessness – and you’ll get Russian хандра (khandra), a very peculiar emotional state that is most detrimental to doing just anything. Among the usual symptoms are a strong reluctance to leave the bed and staring at the ceiling becoming the favourite pastime.

This all seems to make spending autumn in our city quite a gloomy prospect, but remember: no one comes to St. Petersburg for the local climate. So hope for the best, prepare for the worst, and focus on the many good things that our city has to offer!