Music for Everyone: ITMO Students Create Guitar for People with Disabilities

The special guitar provides an experience almost identical to holding the usual instrument. Its users can choose one of the multiple modes, including standard, one-handed, and single-finger. This guitar will also be a perfect choice for all aspiring musicians wishing to learn how to play quickly. 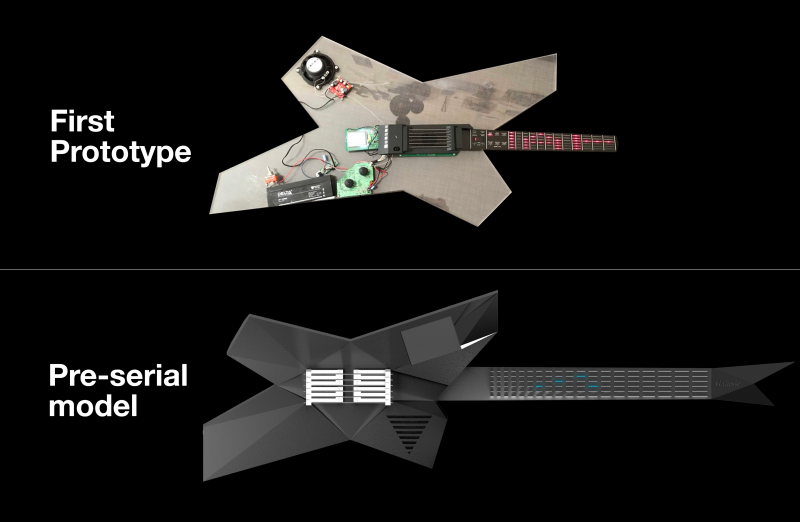 According to the World Health Organization (WHO), over one billion people live with some form of disability and this number is steadily increasing. Many of these people are fond of music and would like to master the guitar on their own. However, often they simply can’t do it as playing this instrument requires hand coordination and strong fingers.

“I’ve long dreamed of picking up a guitar and playing my favorite rock songs but I couldn’t do it because of Duchenne muscular dystrophy. But I kept practicing and tried to master the chords. In one of my vain attempts, I realized that I wasn’t the only one struggling with this problem. There are millions of other people who strive to feel like a rock star but don’t have such an opportunity due to their conditions. And if you give them that chance, then one day you might hear a new Kurt Cobain,” says Denis Goncharov, a student of the ITMO's Innovative Entrepreneurship Master's program and the founder of Noli Music.

Denis put together a team and set to work. The first prototype didn’t have strings, instead, there were buttons on the neck, just like on the Guitar Hero controller. By contrast, the prototype had not four but over a hundred buttons, all of them fully reproducing the possible positions of strings on the frets of the instrument. To play a chord or a melody, you had to press the buttons as you would do with strings on an ordinary guitar.

“It’s easier to push buttons than hold high tension strings,” explains Denis Goncharov. “However, this idea never took off. The buttons made it impossible to add all sorts of guitar techniques such as string bending or vibrato. Real musicians saw this guitar as an interesting yet different experience, and we wanted to make it authentic.”

The team had to rethink their product and find a way to better simulate the strings of real guitars.

Working prototype: back to strings

It turned out that the best way to simulate the strings is to use the real ones. However, the team went for a different principle. Usually, the strings of the instrument are under so much tension that pressing on a string and then plucking it causes extra tension, thus creating a sound. A wooden body or pickups, in the case of an electric guitar, can enhance this sound.

“When playing our guitar, you don’t need to press hard on the strings but simply touch them in the right places,” says Maksim Matveitsov, the tech head of the team. “We’ve introduced special sensors, which read the hand’s position on the neck and basically make the guitar play a sound from the loaded samples. The same principle is used in synthesizers.”

Thus, you don’t need very strong fingers to play the new guitar, which means people with disabilities will be able to play it. The team developed several prototypes and figured that their invention will be suitable not only for initially targeted audiences but also for anyone afraid of learning to play the guitar.

The developers also used note highlighting, another feature of synthesizers. Some digital pianos are equipped with lights on the keyboard for beginner musicians. The new guitar also has a highlighting mode: it lights up the place on the fret for you to touch.

“You turn the interactive learning mode on and see which chord you need to play now. Just put your fingers on the lights and you can play,” says Maksim Matveitsov. “You can use an app to see how good you played and whether you followed the beat. This helps you learn faster.”

This addition has dramatically increased the number of prospective buyers. However, the team never took off the course on creating a guitar for anyone struggling with the traditional instrument and added even more features for people with disabilities.

There are some advanced features for better user experiences. For instance, in the one-handed mode, you can simply press the frets on the neck to get a sound and don’t need to use your other hand to pluck the strings. While in the single-finger mode, clamping one string in a certain position will produce a chord, not a single note.

“Of course, it’s a different experience but it will work for almost anyone who has at least one finger on one hand – for example, people with cerebral palsy, muscular dystrophy, or only one arm,” explains Maksim Matveitsov.

Since this startup aims for the American market, the team contacted different organizations, including the Iraq War Veterans Organization.

“A former pilot told us about his friends with injuries or missing limbs who would love to play the guitar. He asked us to send him a presentation and let him know when we enter the market,” notes Denis Goncharov.

Denis is engaged in prototype testing to identify any problem a user might encounter. The latest versions are still too heavy due to the use of lead-acid batteries, which will soon be replaced with lithium-polymer ones. By the end of spring, the team plans to create a complete demo.

Also, the developers want to expand their audience through crowdfunding. The approximate price of the future guitar will be about $500 and the team already has a number of pre-orders from America, Europe, and even Russia. To promote the guitar, the team is also developing an app with a pro course on guitar playing.

“A music teacher from Singapore who has 18 years of experience is now working on our course,” tells Maksim Matveitsov. “It will be great for both beginners and experienced users. There will also be an option of private lessons, in case the course isn’t enough. Now, we are developing a mode for teachers and students. That is, they will have the chance to play the guitar together via Zoom. When a teacher touches the string, a student can see light at the same place on the neck. We’re also going to test simultaneous play to let our users play together without leaving their homes.”

The team's invention was presented at the 10th Anniversary Congress of Young Scientists in the Inclusive Technology category.