In 2019, a Russian federal program for the development of synchrotron and neutron-focused research was launched. The program will go on until 2027; in that time, new megascience-class projects, such as X-ray lasers, synchrotrons, and neutron generators, are expected to be launched. As part of the program, in 2021 the Russian Ministry of Science and Higher Education announced a contest for research and specialist training. A team of scientists from ITMO University participated in the contest and won with a project on X-ray laser technologies in nano- and biomaterials science. 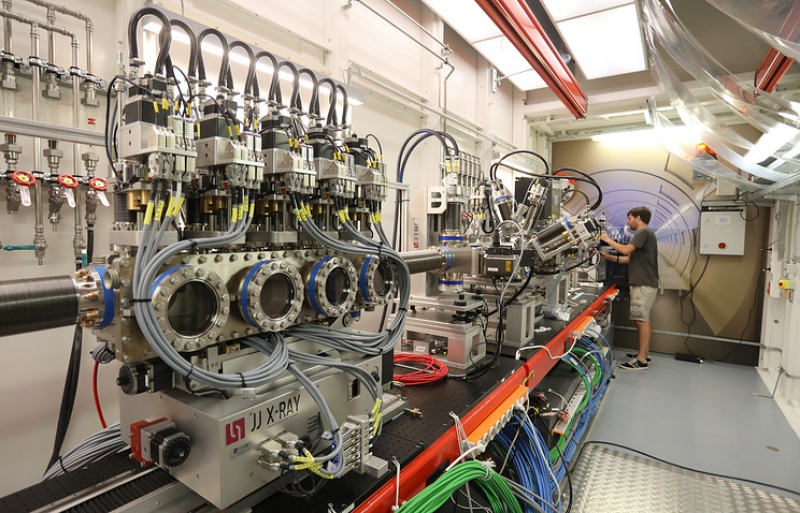 Why we need X-ray lasers

An X-ray free-electron laser emits short and highly intensive pulses of light in the X-ray band, focused within a small area. This allows scientists to conduct measurements with high temporal, spatial, and energy resolution.

Using an X-ray laser, researchers study various quick processes, such as the formation of chemical connections or the oscillations of molecules. Such systems also make it possible to decrypt and visualize the structure of proteins, viruses, and nanocrystals at the atomic scale, to study the generation of charge carriers under the effect of light in solar cells, and to examine objects in extreme conditions.

Several years ago, the official launch of the European XFEL (X-ray free-electron laser) took place in Hamburg, Germany. In 2019, researchers from ITMO were among the first Russian scientists to gain independent access to the system and carry out experiments. In September 2021, ITMO received approval for the conduct of two more: one is a continuation of previous studies of magnetic dynamics, while another will focus on supramolecular structures.

The research team from ITMO has three objectives: first, they plan to conduct research as part of their project; second, they will train specialists capable of working on megascience installations; finally, they will develop specific technological solutions.

“While we conduct our research and train PhD students, we also plan to come up with scientific solutions that could result in new products and technologies. One promising avenue of research are halide perovskites: a team headed by Sergey Makarov is working on a new technology for the production of perovskite materials for photovoltaics. Our goal is not to just discover something and publish an article in a top-rated journal, but to suggest specific solutions that may, for example, make solar cells more efficient and productive. We adhere to this philosophy in this and other research projects,” explains Alexey Romanov, head of the Research Center for Advanced Functional Materials and Laser Communication Systems.

The team’s second goal (training specialists) is directly related to the synchrotron laser project SILA, which will launch at the Logunov Institute for High Energy Physics near Moscow. The project’s synchrotron laser will outperform all of its current counterparts in both capacity and technical specifications.

“So far, there hasn’t been an X-ray free-electron laser in Russia. One is expected to be built by 2027. There are publications on the opportunities offered by such a set-up, but the project hasn’t entered the implementation stage yet. So far, construction started on other installations – those are smaller, but still quite grandiose. These are the projects that call for well-trained specialists and better-developed scientific framework. Our project aims to fulfill both of these needs,” says Alexey Romanov.

The project also includes the development of a Master’s degree program titled Megascience Laser and Synchrotron Technologies. Its students will be involved in the development of completely new megascience projects. In the course of their research activities, the students will collaborate with representatives of international research centers and companies. Upon graduation, they will possess unique competencies and research experience in the fields of physics of nano- and biosystems and the development of technologies based on laser and synchrotron radiation sources.

In the near future, the scientists will conduct fundamental and practical research. For one, they will develop theoretical aspects of their field that will likely come in handy in the long term. A team headed by Dmitry Karlovets is already conducting research into so-called “twisted light.”

“The idea is that the wave-front of such light is shaped like a spiral, not a plane like it usually is. These twisted beams can be used to manipulate the tiniest objects, like molecules or nanoparticles, with high precision. Not that long ago, a Nobel Prize was awarded for research on optical tweezers, which utilize essentially the same principle. To put it bluntly, we’re trying to come up with a new shape for those tweezers,” comments Alexey Romanov.

At the same time, the scientists are tasked with conducting practical research, too. The project’s practical part concerns the fields of green energy, sensorics, quantum communications, and biosecurity.

“A team led by ‪Vladimir Vitkin will collaborate with specialists from the Smorodintsev Research Institute of Influenza to study viruses, including, possibly, the coronavirus, and we plan to develop “passports” of viruses and their mutations: in other words, to develop methodologies for quickly identifying how dangerous a virus is, what it was like before, and how it has changed since. We’re also very much interested in medical biopolymers. That includes, for instance, drug delivery systems, especially water-soluble ones. These systems can be made using certain kinds of polymer materials. Another team, led by Maya Uspenskaya, is already on the task,” tells us Alexey Romanov about the team’s future plans.