The final of the second round of the university league’s Science Slam took place on Friday. Six young scientists fought for the audience applauses as they explained their research in layman’s terms to the not so scientific audience. Based on the audience votes, the winner was the only girl in the competition, Alexandra Toropova, a Master’s student from the Department of Computer Photonics and Digital Video Processing. For those who missed it, here’s a brief description of what these six geniuses are creating and discovering. 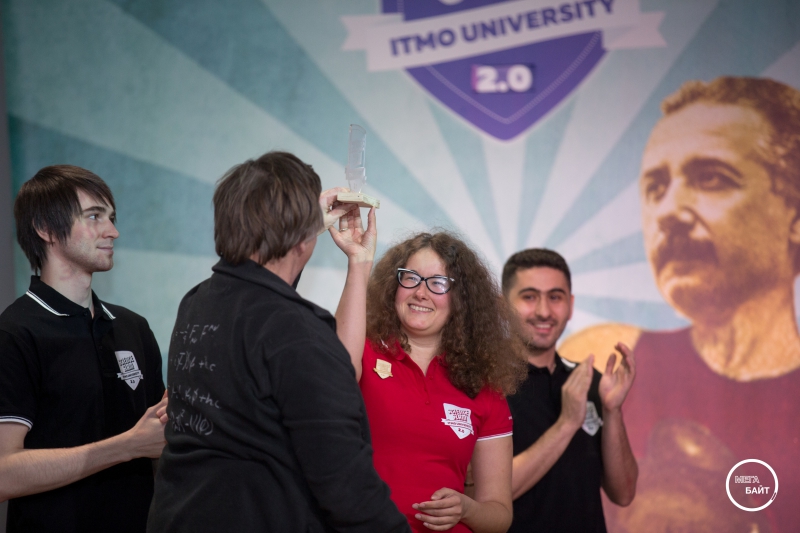 Alexandra Toropova, the winner, with the title "Can you eat a rainbow?" has combined her love of museums and candy with science. In her home town of Kaliningrad, together with her parents they founded the Marzipan Museum. Now it’s no longer about ordinary candy but more about multi-colored chocolate and caramel, not through the use of dye or chemicals, but with the miracle of optics. Alexandra explained the mechanics of her invention — tiny strokes are made on the surface of the caramel or chocolate, something like a diffraction grating. When white light falls on it, it disperses inside the candy in a rainbow-like pattern. Unfortunately, on caramel it lasts only for at most a day, while for chocolate, the hologram sticks around for up to three weeks. This kind of holography can also be used in medicine as a way to differentiate genuine medications from knock-offs.

Dmitry Pyunenen, a Masters student, explored "how to have the best time in St. Petersburg without making any decisions". He is giving tourists a break, a chance to actually enjoy their vacation by making all the decisions for them. Instead of spending their whole holiday in the hotel room behind their computer trying to decide the best way to spend their few days, they can now make use of a program he’s developed. It analyses the user’s interests and budget, and plans the sightseeing route for him. You can read more about it here. Yuri Volkov on "How to find the key to the heart of a movie lover". As a movie lover himself, Yuri wanted to get to the bottom of some false ratings he found on film websites. So he decided to make his own system by creating an algorithm that would predict whether a film would be successful even before it’s released. He used specific criteria like actors, genre, release year of film, the country it is filmed in, facebook likes, etc. "This is only a theory, but film creators use similar methods," he explains. Read more about his algorithm.

Dmitry Stepanov talked about "How temperature variations in nuclear power stations affect family budgets". Since a tiny variation in temperature in any specific location of a power plant has a costly effect on equipment and output, Dmitry recognized that the issue of inaccurate measurements needed to be rectified. With many conditions that need to be met in such an environment, he landed on a solution that uses thermal grease and high-temperature tape. Read more about here. Anton Chukhlamov posed the question "can you teach a computer to see?". While image recognition is already being widely used, what Anton proposes is a computer that can see the true nature of what is going on. He gives the example of a boy falling in the snow to make a "snow angel", or a person falling to the ground as a result of a sickness. The naked eye can detect the signs of distress of the latter example, and Anton’s program has been designed to do just that. Such a technology could improve security as it can recognize the difference between a woman being attacked by a menacing stranger and a woman being embraced by her husband, in a dark alley. Read more about how he uses the Akinator genii app and Machine learning for this aim.

"What are we breathing?" thought Umidjon Rahimov after waking up every morning with a headache and weakness. He found that the source of the problem is lack of ventilation. After thorough research he found that the UVRK-50M, a Russian-made ventilator was the simplest to install and provides high energy efficiency. The facts are clear, he explained, "in Central and Eastern Europe, men on average spend about 22 hours a day indoors, and women spend about 23 hours". Then, what they need is better air!