ITMO Sets a Course on Practice-Oriented Research and Future Markets

ITMO's Academic Board recently had a meeting focused on the results of the research activities' development in 2016 and the university's plans for future. Vladimir Nikiforov, Vice Rector for Research, gave examples of successful R&D works, disclosed the results of the university's progress and set new tasks before his colleagues. Elena Egorshina, Head of Marketing Department, told of the work of the recently opened Office for Project Management of the National Technology Initiative. 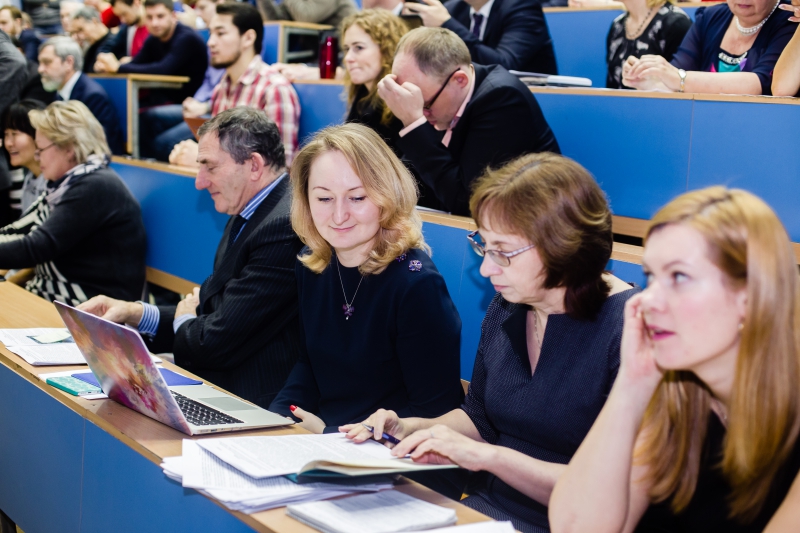 Vladimir Nikiforov described how ITMO's research is becoming more practice-oriented. For example, its scientists now work on different inventions for medicine. They are developing a robotic system for clinical laboratory tests that uses nano reagents, as well as a new line of microscopes for in vitro diagnostics.

In collaboration with the Diakont Company, ITMO produced robots for assessing the conditions of pipelines that can be used in housing and utilities sector. The university also conducts research on developing hardware components for radio photonics, and its Quantum Communications SIE led by Artur Gleim continues its work on secure quantum networks. Recently, President Vladimir Putin acknowledged the company's achievements during his visit to the Diakont Company.

The work on bringing the unique MRT technology that makes use of metasurfaces is also being continued — this technology has already been patented in Russia and might become ITMO's first international patent, as well. The university has already signed license agreements with companies that are interested in buying this technology — according to Vladimir Nikiforov, this is a great example of how fundamental research becomes practice-oriented and is then commercialized. The Vice Rector for Research gave many other examples of successful research, including those on use of laser technologies, fiber-optic gyroscopes, light design and urban studies. For instance, specialists from the Light Design School study the lightning conditions in St. Petersburg so as to optimize them for the Lensvet SUE. A team from the university's different departments works on developing St. Petersburg’s transport plan for the Federations Cup in 2017 and the World Cup in 2018.

"These are only some of the research projects our university works on. Yet, they are enough to make several conclusions. First of all, we can now see the tendency towards practice-oriented research that wasn't here some five-six years ago. Secondly, the university uses its competencies to do research in new fields — light design, medicine, urban studies, etc. We already see the output of the development strategy we elaborated when we joined the 5−100 Project," comments Vladimir Nikiforov.

The Vice Rector also shared some figures. The total volume of R&D for 2016 amounted to 2.3 million rubles. This is a lot in comparison to Russia's other universities, though it does not differ much from the previous year. This is a troubling issue, as the dynamics for R&D were always better for the past 15 years. Vladimir Nikiforov also drew attention to the issue of research students. The amount of young scientists that defend their PhD theses at the university decreases every year. Two years ago, there were 96 of them, last year — 87, and only 81 this year. At the same time, all the positions for research students are filled every year, for instance, this year there were 270 of them.

The Vice Rector also noted that not all of the Research students receive funds for their research — in 2016, it was only 378 of 901. So, though the university gets enough funds, not all of the young scientists get access to them.

Office for Project Management of the National Technology Initiative was opened in the end of 2016. According to Ekaterina Egoshina, for the past couple of months, it has already conducted several events (approximately an event a week), dedicated to development of the STI markets. "In 2017, we will launch centralized instruments for searching financing for our new STI projects. Engaging business in such projects is most important. We'll be developing the markets of SafeNet, MediaNet, FashionNet. Our university also joined the NeuroNet branch association — this means that our specialists will be the ones making the most important decisions in this field", comments Ms. Egoshina.

Next year, ITMO will regularly host project schools on STI. The university will also launch an engineering center on the SafeNet market and conduct several conferences, including those on AI and neural technologies. IT will also organize the Foresight Fleet conference that will gather experts on the National Technology Initiative from all of Russia.

"Assuming leading positions in National Technology Initiative programs is most important for us. These programs are a great guide for universities, they show how future specialists are to be trained, as the professions that will be in demand in 10 years don't even exist yet", concluded ITMO's Rector Vladimir Vasilyev.