Gutenberg's Lounge: Why Stonehenge is an Observatory, How Satellites Stay on the Orbit and Where One Starts His Way to Mars

Humankind has always reached out to the stars, to the endless space above. And those are not just words: since ancient times, people were set on researching celestial bodies, using them to track time and create calendars. In several thousands of years, humans launched the first artificial satellite, flew to space and set foot on the Moon's surface. As of now, we can well aspire to building a new home on some other planet. On the Space Exploration day, optical engineers and science writers gathered at Gutenberg's Lounge to speak about humanity’s long history of conquering space. 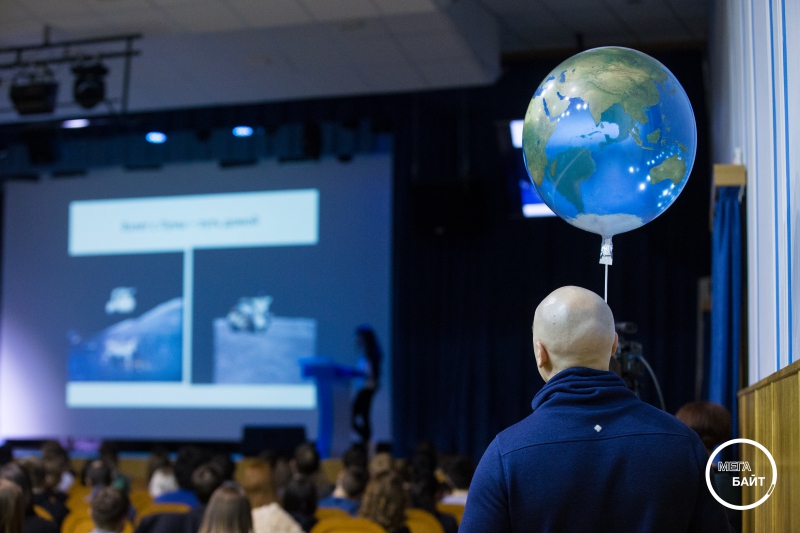 "All ancient nations had sun symbols, as well as symbols for the moon and stars. The first calendars were based on studying the sky, and were carved on walls, bronze mirrors and even mammoth tusks. People spent years on making the necessary observations. What's more, celestial bodies also helped people orient themselves. Equinox equilibriums paced the annual cycle; in ancient times, there were six seasons in a year. So, how did ancient people decide on such things?" questioned Sergei Stafeev, and gave several examples. There are many “sun temples” in the world, many of which are even older than pyramids or the Stonehenge. They were built in such a way that a particular axis that passes through certain architectural forms coincides with sunbeams at sunrise on particular days. For instance, a sunbeam that went through a pair of gates could be seen only at sunrise on the summer or winter solstice, i.e. the shortest and the longest days of the year. Such astronomic "clocks" helped ancient people decide when to start or finish farmwork, and track other important dates.

Nowadays, we see our modern calendar as something obvious. Yet for those who had little knowledge of the Solar system, the sun temples were a great breakthrough and a result of years of research. Most scientists agree on the famous Stonehenge being a sun temple as well, something like a primitive observatory that helped track time and the movement of celestial bodies. Another ancient monument - Ireland's Newgrange - can also well be a sun temple. It is a giant burial mound with a tunnel; on December 21, the sun lights it in such a way that the tunnel and the room at its end are filled with bright light. To have a chance to see that, tourists participate in a lottery: only 50 people can enter Newgrange at the same time, and there are always about 30,000 of those who want to.

Spatialization was also a problem for ancient people, especially those who lived in steppes and the like, i.e. where they had no ground signs to orientate. In Altaic steppes, there are "moulds with ridges", a group of ancient constructions. The lines of stones that connect the moulds have particular marks on them; those were used to track the position of celestial bodies and orient. What's the difficulty, one may ask? Well, just try telling where's east and where's west right from where you are now standing. Most probably, it'll take you more than a minute to do that, and you'll be remembering the map of the city you're in, and derive the directions from that.

"The ancients had mobile sighting systems, as well. In Egypt, that was a staff with a chevron-shaped base that could be used to tell time. Using a special rod stuck into the ground, ancient people could also define the latitude and the inclination of earth, yet that called for long observations. In Machu Picchu, there are inclined tunnels and wells from where stars can be observed at daytime. The Incas could track Venice's position this way," added Sergei Stafeev. "There are lots of theoretically possible ways of delivering cargo to space: space elevators, space skyscrapers, etc.; yet the only real one that's used now is by using carrier rockets. When most think of space flights, they imagine gliding in gravity-free states and the like. Yet, first one has to move with enough speed so as to leave the Earth's gravity field," explained the speaker.

In case you didn't know, the International Space Station (ISS) does not glide in the gravity-free state, but is endlessly falling. If one builds a skyscraper as high as it flies, a person standing on the top floor will feel 90% of the Earth's gravity, i.e. it won't be much different from standing on the ground. So, why the ISS does not crash? Speed is the answer. If one sends anything towards space with the speed of some 8 kilometers per second, it will start to fall at a certain point, but the fall would take like forever. The falling speed will be so high that the object will be shifted horizontally in relation to the Earth's surface, and as the planet is globe-shaped, the object will stay on the same height. This may sound strange, but just try drawing it, and it will all become clear. The speed of 7,9 km/s is called the first cosmic velocity. Yet, how does one gain it? That would be a simple thing to do when on Earth: there's always something to draft off. Yet, how does one do it in vacuum?

"Let's go with a simple example: one sits in a boat when there's no wind and throws apples. This makes us shove off, so the boat moves. It happens due to the law of conservation of momentum. It is used in carrier rockets, as well - it's just they make use of a jet of gas instead of apples," explained Andrei Somoilich.

Yet, to have a powerful enough jet one needs great amounts of fuel. For example, the useful cargo of a carrier rocket, i.e. people and items, weighs about 2-5% of its overall weight, and the fuel weighs about 85%. The fuel usually consists of the fuel itself and the oxidizer - liquid oxygen, as there's no combustible medium in space. Thus, the weight of almost everything that's sent to space plays a great role. This is the reason behind using rockets with multistage booster vehiclesthat have fuel tanks and vehicles in different stages of the rocket, which are separated as soon as their fuel burns out. Sometimes, external fuel tanks are also used - those are separated as soon as they become empty, as well. All of that allows the rocket to travel faster.

There are two types of multistage rockets' constructions: with sequential and parallel stage arrangement. The first type implies turning on each consequent stage after separating the previous one, which allows adding any amount of stages. The disadvantage of such an approach is that the first stage's vehicle has to carry all the others. Rockets with parallel arrangement are different: all of their stages can work simultaneously. Surely, there's also an arrangement that combines both approaches - the first and second stages have parallel connection, which allows increasing the starting thrust, and all the subsequent stages have sequential arrangement, which contributes to increasing the overall speed. For instance, this is used in the Russian Soyuz type rockets. Getting to the Moon has long been humanity's dream. The first science-fiction novels about it were written as early as in Ancient Greece. Writer Lucian of Samosata(about 125 CE – after 180 CE) wrote the novel "Icaromenippus or The Sky-man" where he described a flight to the moon and war with its natives. Moon's first detailed images were drawn by Galileo Galilei. And surely, everyone knows about Jules Verne's famous "From the Earth to the Moon". Now, humanity knows the time one has to spend to get to the moon - that would be about three days if moving at 11 kilometers per second - the second cosmic velocity. This is the speed that allows an object to leave the planet's orbit and become the Sun's satellite.

"The technical details of the flight depend on one's goals: staying on the Moon's orbit, filming its other side or landing. What is more, landing can be done in different ways, as well. One has to also note that the moon moves, thus the spacecraft has to be launched in such a way that it would meet the moon in a certain place in several days’ time. Also, for the first landing, it was important to land during the lunar sunrise," commented Dmitry Oliferovich.

For launching Apollo-11, the Saturn-V rocket was used. At first, it moved to the low support orbit at about 200 kilometers, and was then launched to the Moon by the rocket's third stage. To get to the moon, the astronautsused the lunar module. During the flight, boosters were constantly used to correct the spacecraft's course. So as to stay on the moon's orbit, they had to decrease the speed. What is more, landing also implied using a special retrorocket engine, as the moon has no atmosphere where a parachute could be used or water to land on.

When the first test ships were launched at the moon, the scientists noticed that the automated ships lost their course for no obvious reasons. Their orbits' designed parameters differed by kilometers from the real ones. Then it turned out that there are regions on the moon where concentration of matter on the surface is much higher, which made the spacecrafts lose their course. This showed that sometimes, space can be explored by trial and error only.

"Did Americans land on the moon? Definitely. Astronaut Alexei Leonov has done a great work on disproving the many theories on that they didn't. Recently, the Moon has yet again become the center of attention. Both Roscosmos and NASA develop projects on creating stations on the Moon's orbit. In 2018, USA plans to conduct a piloted flight around the Moon. Why did it all become so important again? The way to Mars goes through the moon. Thus, it is to become the midstation from where humanity will move to the Red Planet," explained the lecturer.