Youth in Science: Summer Internship in Photonics and Optical IT

The Summer Internship has begun at ITMO University’s Department of Photonics and Optical Information Technologies. For two weeks, tenth-graders will acquaint themselves with the latest research in the fields of quantum information, biomedicine, femtosecond optics and other innovative sciences. The high-schoolers will work with scientists on actual research, start their own project and will soon be able to take part in prestigious conferences for experts in photonics and optical IT. Read on to find out how Summer Internship works at ITMO University and how students can start getting involved in “adult science” in tenth grade. 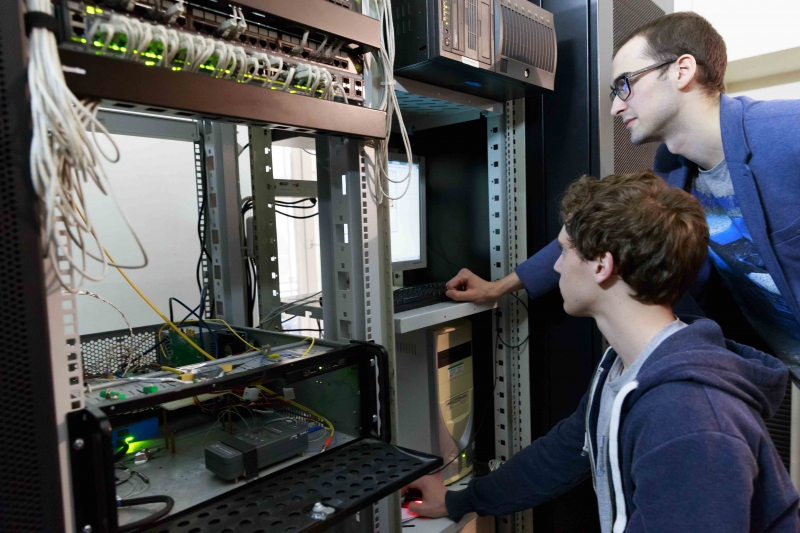 The first Summer Internship for school students was set up at ITMO University’s Department of Photonics and Optical Information Technologies back in 2003. It all started with a physics club organized by some of the department’s staff, among whom was the current head of the initiative and deputy head of department, Natalia Andreeva. Back then the children learned about the club from mostly teachers and friends. Throughout the year children from grades 5 and up would come to the university to gain their first knowledge of optics and physics; the older kids were even allowed to visit the laboratories and use the equipment usually reserved for university staff. They would also have the opportunity to work with the department’s scientists on their own research projects.

In a few years the initiative evolved into a constant project that collaborated with the city’s schools and gave children a chance to make their first step towards careers in science.

“I believe the biggest advantage over the way we used to work in 2003 and later – when we were still finding our way – is that today, instead of completing prepared lab tasks where the result is known in advance, the kids can work on actual major research and collaborate with young scientists,” – says Natalia Andreeva – “We’ve even had a few cases when they contributed to notable discoveries.” This year, 11 teenagers joined the two-week Summer Internship. They are all tenth-grade students from the city’s top Physics schools: the Physics and Mathematics Lyceum №239 and Lyceum №590. In the course of the internship they are able to explore the department’s laboratories and learn about the latest research in optical information, biomedicine, femtosecond optics and quantum information. The program is altered each year so that no lectures are ever repeated – the information is always relevant and up-to-date with the latest findings and trends. For example, this year the kids will learn about optical diagnostics in biomedicine. As Ms. Andreeva says, this course is at the frontier of science.

“Biomedicine, innovative developments in diagnostics equipment – this is one of the most promising fields of research today; scientists all over the world show interest in it, major research is being conducted and large grants are given. Our department, too, is working on some promising projects in this field and we collaborate with prominent medical centers to help medical specialists make accurate diagnoses. We want to tell the kids about these trends. If they find it interesting, they can choose to start a career in this area,” – she explains.

The educational process consists of lectures and workshops, with a set amount of time reserved for research work. The lectures are structured as a dialogue and are less constrained than those in academic format. The students can also converse with the teachers, many of whom are young specialists themselves, in a less formal setting during coffee breaks. The students prepare final reports based on the knowledge acquired in the course and the results of the research projects conducted in teams with the department’s experts; some will be able to continue their research projects even after the internship is over.

What opportunities does the internship offer?

Near the end of the Summer Internship, any student can pick a field of study and continue their project work throughout the year. All one needs to do is report to the head of the initiative and in September the department will assign a curator to the student, as well as help them form a schedule of their classes. Such classes are taken for a year at least once a week. The students, together with a professor from the university, continue their project and prepare for participation in scientific conferences. Many of the students who have worked on such year-long projects then went on to take part in the Young Scientists Conference and achieved success there, says Ms. Andreeva. In addition, all school students who take part in the various events of the Department of Photonics and Optical Information receive invitations to specialized conferences, seminars and lectures by Russian and foreign scientists that are held at ITMO University all year round. Such activities not only help them perform well at school and prepare for national school Olympiads, but also to collect formidable portfolios and receive bonuses when applying to universities. ITMO University awards additional points during the application process to applicants who have participated in contests certified by the Russian School Olympiad Council, as well as for various personal achievements. You can read more about it here.

The Department of Photonics and Optical Information Technologies has presented its projects for collaboration with school students at numerous events abroad. In late May, at the 14th International Conference on Education and Training in Optics and Photonics in Hangzhou, China, the poster presentation by Azat Ismagilov, research associate at the International Institute “Photonics and Optical Information Technologies” was well-received by the international audience. During the course of the conference he spoke to scientists from the UK, Singapore, USA, Canada, Japan, China and many others.

“The first thing my foreign colleagues would ask me is: “How do you deal with letting schoolchildren use such expensive lab equipment?”. Indeed, such practice is not very popular abroad; even students often don’t have access to all of the lab equipment. Per the reports of our colleagues from Japan and China, they, too, lack this kind of pre-university training; there is no collaboration with school students, as well. It seems like such a simple concept and ITMO University has implemented it well and gotten great results. Which is why our presentation was noted as one of the conference’s most notable,” – tells us Mr. Ismagilov. Throughout the school year, approximately 500 school students take part in the various events set up by the department. Many of them are from other cities, some coming from as far as Petropavlovsk-Kamchatsky, says Ms. Andreeva. According to her, such an approach where the universities engage with schools, curate talented students and invite them to intern at universities is what makes Russian universities different from others.

“Many foreign universities, even if they do work with school students, tend to use a different method. They try to inspire them through classic physics and the school curriculum. Here, we try to emphasize that any student from a regular school without any in-depth knowledge of the subject can come here, pick a field they like and want to study and begin their education. This helps them perform well in school, the kids gain a real interest in studying – there have been many examples. We try to make them interested in that early age, to give them a vector for further development,” – she explains.

Many of those who are today giving lectures and holding workshops for tenth-graders were too, once, like their audience. For example, Artur Gleim, head of Quantum Information Laboratory at International Institute “Photonics and Optical Information Technologies”, attended such a course when he was in tenth grade. Having gained interest in quantum technologies, he is now working on development of innovative projects. For instance, in March of this year, a team from ITMO University won the Russian Federation Government grant on developing a system for operating a geographically distributed data storage and processing center that will make use of quantum technologies for protecting its communication channels. The project has yet no counterparts in the world. The project's initiator was the Smarts Company that deals in telecommunication networks and high-reliability communications services.