Russian, German and French Scientists to Collaborate on Nanowhisker Research at European XFEL

Scientists from ITMO University were granted the right to conduct an experiment on XFEL, the world's largest free-electron laser. The project will be carried out in collaboration with researchers from Germany and France. It will also be the first project at the European XFEL managed by a group of Russian scientists. The experiment is devoted to the study of nanowhiskers - nanomaterials with high spatial and energy resolution of the electronic structure and atomic formation. Among the potential applications of nanowhiskers, or threadlike nanocrystals, are various areas of electronics and medicine. Read out article to learn more about the project and its future prospects. 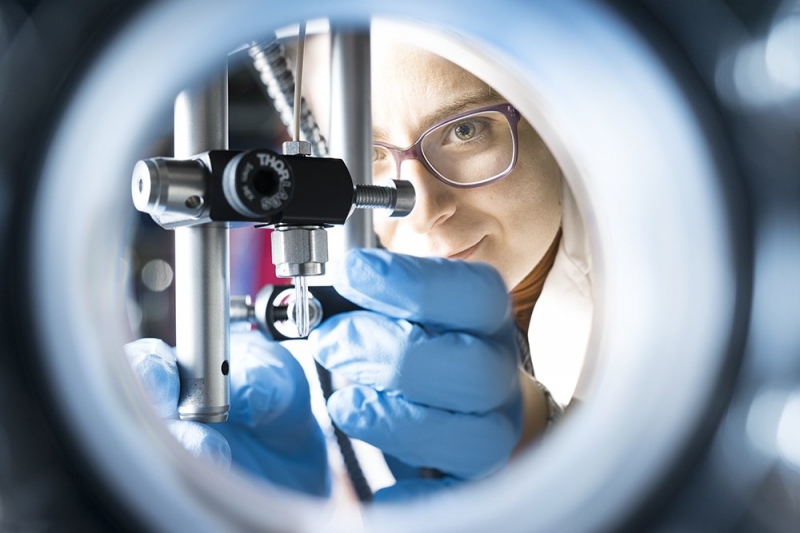 European XFEL is an international project for the creation of the world's largest free-electron laser, designed to monitor the course of chemical reactions. The project was developed by the research center DESY (Deutsches Elektronen-Synchrotron, German Electrons-Synchrotron) and submitted in 2002. Construction continued until 2017, with 12 countries taking part in it (the main participants were Germany and Russia, having financed the project by 58% and 27%, respectively). The official opening of the European free-electron X-ray laser was held on September 1, 2017 in Hamburg.

A laser beam machine more than three kilometers long is located in Germany at the depth of 6 to 38 meters underground and stretches from the DESY laboratory in Hamburg to the outskirts of Schönefeld, where administrative buildings, experimental stations and laboratories are built on a territory of 15 hectares.

XFEL's grand opening ceremony marked the launch of the first two experiments in which X-ray free-electron lasers will play a key role. With the first experiment scientists have shown how it is possible to study fast reactions, particularly the interaction of certain molecules with an aqueous medium. The second experiment was aimed at "deciphering" the structure of a molecule.

The work of Russian scientists on the laser beam machine is carried out under the auspices of the national scientific and educational association "Mega-Class Research Facilities", coordinated by the Kurchatov Institute national research center. The main task of this association, of which ITMO University is also a member, is to prepare projects for their implementation on XFEL and other mega-installations.

In addition, as early as 2015, a new unit was established at the ITMO University - the Transnational Scientific and Educational UniFEL Center for Advanced Materials Research Methods. For this purpose an agreement on cooperation was signed between the University of ITMO and the Technical University of Freiberg (TU Bergakademie Freiberg). Russian and German scientists will collaborate and prepare materials for future experiments on XFEL, as well as on the development of joint educational Master’s and postgraduate programs.

Alexey Romanov, head of the Department of Modern Functional Materials at ITMO University and co-director of the UniFEL Center, shared with us that a meeting was held at European XFEL offices in Hamburg in June 2017. Participants discussed joint research with the Center for Nanophysics and Nanotechnologies (France), represented by professor Jean-Christophe Harmand. The discussion was also attended by Professor Sergey Molodtsov, Head of the Transnational Scientific and Educational Uni-FEL Center for Advanced Materials Research, Vladislav Bugrov, Director of ITMO’s School of Photonics and Vladimir Dubrovsky, Professor at ITMO’s Department of Modern Functional Materials.

"A nanowhisker is a kind of threadlike crystal (whisker) with a cross-sectional diameter of one to 100 nanometers and a ratio of length to diameter greater than 100. As a result of close scientific collaboration, Russian and French scientists have developed a technology of epitaxial growth of a homogeneous array of crystalline nanowhiskers based on A3-B5 semiconductor compounds. This technology allows us to change the elemental composition both along the radius and along the axis of the nanoscanner, thereby creating nanoheterostructures unique in their electronic and mechanical properties", comments Alexey Romanov.

However, in order to effectively manage the properties of nanowhiskers, scientists need to study their crystal structure, as well as their electronic, optical and mechanical properties. The European XFEL, created in cooperation with the Russian Federation (coordinated by the Kurchatov Institute national research center ) opens new opportunities for this unique research. In particular, the use of an X-ray free-electron laser with high excitation density and a short impulse duration opens up brand new possibilities for analysis of the structure and electronic spectrum of nano-objects with atomic resolution. Moreover, it allows scientists to study dynamic processes in the volume and on the surface of nanoparticles with a high temporal resolution, specifies Alexei Romanov. In addition, the high power of the X-ray source makes it possible to study the dynamics of the processes as a function of the energy of the X-ray quantum.

How will the research at XFEL work?

Scientists from ITMO University were recently granted the right to conduct research on the crystal structure and composition of nanowires and nanowhisker heterostructures at XFEL. To gain this right, scientists have to submit an application on the project’s website, explaining the relevance of their research and the desired scientific results. In addition, it is important to show that the team possesses the sufficient experience and scientific background necessary to carry out the project.

Preparation for the international project began at ITMO University’s UniFEL center in November 2017. Vladimir Dubrovsky, Professor at the Department of Advanced Functional Materials of the ITMO University, is the head of the project devoted to the study of ultrafast dynamic processes and the crystal structure and composition of nanowires and nanowhisker heterostructures based on A3-B5 semiconductor compounds.

“This project passed a tremendously difficult competitive selection and received approval in October 2018. In total, 43 projects by the world’s top research groups were submitted and only six were granted the right to use it. This is the first project at the European XFEL in which the scientific management is carried out by a group from Russia”, emphasizes Alexey Romanov.

He adds that the research will be carried out on structures with nanowhiskers based on InAs-compound and nanowhisker heterostructures based on GaAs/AlGaAs-compounds. The dynamics of the crystal lattice of an array of homogeneous nanosystems will be studied with the help of powerful short impulses of X-ray and optical radiation. The resulting data will be used to obtain new data on the mechanical and optical properties of nanowires and their relation to the crystal structure.

Scientists from ITMO University will collaborate with researchers from the University Paris-South XI, a French state university specializing in exact sciences, the Photonics and Nanostructures Laboratory, CNRS, Marcoussis (France), as well as representatives of the European Consortium XFEL GmbH.