On October 14-18, the Sirius educational center in Sochi hosted as many as two prominent events for young scientists and engineers: the summit ‘Big Challenges for Society, State and Science’ and, as part of that, the Congress of Councils of Young Scientists. These proved to be particularly successful for ITMO University’s Laboratory of Intelligent Technologies in Robotics, which won the ‘Best Practices’ nomination. Vladislav Gromov, a research associate at the laboratory participating in the events, shared with ITMO.NEWS on how he liked the warm and sunny Sochi, why make robots more intelligent, and what projects the state is ready to provide funding for. 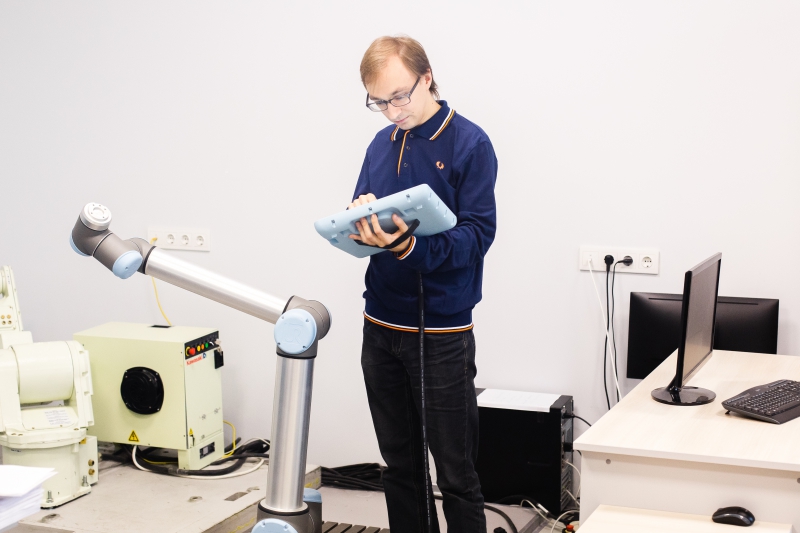 What does the laboratory do?

In our laboratory, which is part of ITMO’s Faculty of Control Systems and Robotics, we try to improve the way robots work in industrial processes. It’s no secret that for the last 30 years, the most forward-thinking manufacturers have been actively introducing them to their plants. Naturally, in such a long period of time, they have worked up a lot of questions they’d like to ask software developers. One set of those is concerned with practical improvements: how do we enable robots to easily adapt to new tasks? How to control robots remotely? How to effectively integrate a large number of robots into one complex technological process?

Another issue we’re trying to solve in our research is, how to build a successful interaction between humans and robots? Before, introducing the latter into the manufacturing process meant that human workers no longer served any purpose, because robots simply couldn’t notice people, only being able to perform a pre-programmed set of simple tasks. Case in point is the robot I was photographed in front of. This is a machine that operates on old algorithms; however unsophisticated, these are still very widespread in the industry. A robot like this can carry out uncomplicated operations, rearrange things, process materials, and crush a person’s bones if they get under way, with the same strength.

What we want to do is to take such risks out of a human-robot interaction, for example, by equipping the machines with force sensors or algorithms of sensorless controls which will regulate how they interact with the external environment. These mechanisms will react as soon as they detect any foreign objects or people so that when a robot, for example, starts squashing a person by mistake, it’s immediately commanded to stop.

Don’t you want to design robots yourselves?

As of now, the market for robot production is quite saturated: it’s hard to compete against manufacturing giants from Germany, Japan and other leading countries in the field. They already have the process mechanical assembly down. We want to carve out our own niche, that of developing cutting-edge software. And we are succeeding in that, by the looks of it: in 2017, we started collaborating with a British company TBA Robotics.

And it is this project that you presented in Sochi?

Yes, at the ‘Big Challenges for Society, State and Science’ summit that was held on October 14-18 in the Sirius educational center. For us scientists, it mostly involved presenting our reports, while the representatives from the Presidential Grants Foundation talked about which projects the state will be most willing to fund in the near future: the interdisciplinary ones. That is because a project uniting specialists from different fields has the potential to achieve breakthrough results. Our project in the development of intelligent algorithms, too, is powered by researchers with different specializations: from mechatronics (robotic systems design) and control systems to programming and network engineering.

Apart from that, the foundation prioritizes the projects which would motivate the youth to participate in scientific activities, and also those which yield topical results that could be used in the next two to three years.

Young scientists from ITMO University should apply for these grants because their projects perfectly suit the criteria of combining theory and practice and achieving viable results that can be introduced into industrial processes in next to no time.

It was great: sunny, warm, 77°F. A nice change of scene from the rainy St. Petersburg. Sirius educational center is also very impressive in its scale. Some of its sites previously served as venues for the 2014 Winter Olympics, and now they host scientific summits and state-of-the-art laboratories. There were no such things when I was a child, like they say.

Apart from just enjoying my time there, I also got the chance to meet other researchers at the Congress of Councils of Young Scientists. Our laboratory even won their contest for ‘Best Practices’. It was really interesting for me to discover how a university’s location impacts its activities, objectives and obstacles it encounters: turns out, regional universities have a completely different experience from ours. We are now used to world-class professors giving their talks at ITMO, we do research together, publish joint papers. Provincial universities certainly have it more difficult.

How did you yourself come to ITMO?

Back when I was in school, I got into programming and decided to apply for ITMO University, it was as simple as that. It just so happened that the leadership related to the topics I was interested in, and as a result, I’m now working in the laboratory that does high-profile robotics research.

In your opinion, should people be worried that robots will steal their jobs?

Not in the near future, no. All current research on making robots more intelligent focuses not on eliminating humans from manufacturing processes, but, rather, on facilitating their work, in terms of strenuous physical activities, for example. I don’t think that the task of transferring heavy boxes from one corner to another is suitable for humans. Robots, on the other hand, can easily do this for us. That’s what we’re doing in the laboratory: we’re trying to harmonize the joint effort of humans and machines, enhance human capacities and bring the tasks we as humankind can solve to the next level.