For the third year in a row, the city of St. Petersburg has become the host of the BarCamp ‘National Technology Revolution 20.35’, an informal educational conference organized by participants themselves. This time, all its lectures and workshops were dedicated to the topic of increasing the competitive performance of Russian companies and expanding their presence on the global markets. The roundtable on ‘Promotion strategies for exporting hi-tech Neuronet solutions onto local markets’ was one of the barcamp’s main events. ITMO.NEWS jotted down the keynotes from the speakers’ presentations. 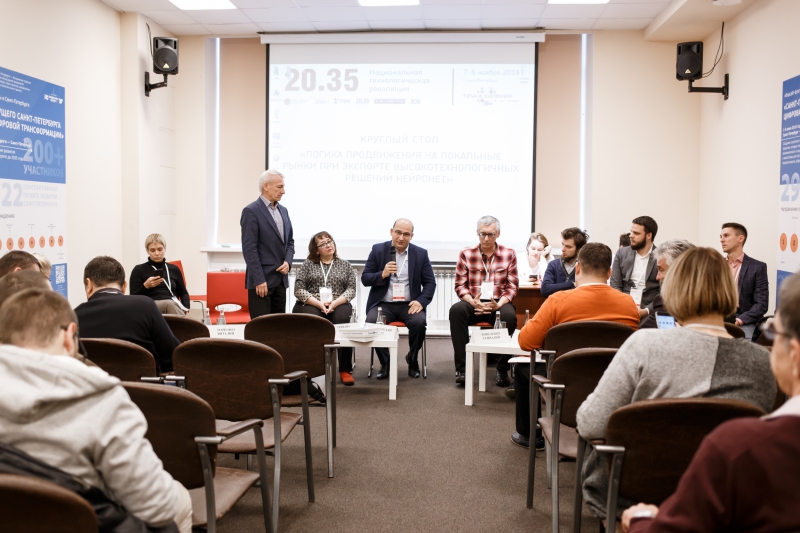 Neural technologies is a promising scientific trend with a wide range of possible applications ranging from medicine to sports. But as noted by Vitaly Zubchenko, moderator of the discussion and Head of ITMO University’s NeuroNet project office, the majority of people in Russia still remain unaware of such breakthrough solutions, although these are widely used in other countries.

“Many professional sportspeople in the US have now started using brain electrostimulation to boost their performance. They say that at the Olympics, even a second’s worth of time gap between you and another contestant can make or break your final result. That’s why they’re eager to experiment with different tools in order to get closer to that coveted first place. That is why, according to one of our speakers, in the following ten years pharmaceutical enhancers and doping will lose their presently significant position on the market to the benefit of neurostimulators which are much safer health-wise.”

The roundtable was attended by specialists who work with different projects and audiences all over the industry. The experts exchanged opinions on the emerging trends in the field of neurotechnologies and discussed the projects that have already been launched on the market.

Gennady Kovalenko, financial director of the Brain is Life company

More than one billion people are now suffering from brain diseases. It is in a bid to tackle this far-reaching condition that we started to do neural research, first and foremost on strokes. Being suddenly locked up in your own body is the most horrible prospect for any modern human, but by linking a metal construction with special software, we believe that we can bring affected people back to their normal lives because human brain really is very resilient.

We developed a complex neural interface based on artificial intelligence technologies. We’ve even taught it to recognize wave-like movements: if you do as much as to raise your hand, it will be able to record it. But then the ball goes to the court of the market and individual medical practitioners. On our part, we are pursuing the most effective way of gradually restoring brain power, computer games that allow to restore mobility through the most standard of things.

As if building a castle from Lego bricks, we are garnering a video game-based rehabilitation complex from the certified components available on the market. By using our device, patients can explore an exciting virtual world saving princes and killing dragons. This makes the reconstructive process that is necessary for each and every patient truly interesting.

How can our unique rehabilitation device help people affected by stroke? Unlike traditional methods, it targets the root cause of the disease: the neuroplasticity of the brain, its ability to function and activate all parts of the body.

Brain strokes is a global condition, and this is why we’re also setting our sights on the global market. We approach this through the two-center model popular among the leading international companies. Our research center is located in Russia, while our sales one is in Tel-Aviv.

We’re only just starting to enter the market; as of now, we’ve managed to sign only a couple of agreements. But we’re keeping our debut on the Western markets on hold. We want to test the waters in the swimming pool before we dive deep into the ocean.

Our company Telebiomet is a resident of the Skolkovo innovation center and member of the Neuronet Industrial Union. What our technology does, in a nutshell, is it conducts an analysis of the head surface area to search for any abnormalities that would indicate possible problems in the activity of the corresponding sectors of the brain. We’ve recently decided to commercialize our inventions and further explore the field of neural interfaces.

Our first product has only just been launched on the market. It is equipped with a special sensor that needs to be put on a person’s head. Through a series of psychoemotional manipulations, this patient can then change their emotional states, switch to concentration from relaxation, for example. By interacting with a computer via a dedicated Bluetooth band, they can also interact with their environment.

This project also included a set of rehabilitation games that patients can play by activating their psychoemotional states. These are aimed at eliciting biological feedback in the body and increasing the blood flow in the cerebral blood vessels, which makes them a sort of an exercise for the brain. We actively tested the games on students: identified the ones that were lagging behind and ‘punished’ them with game sessions to boost their stress resistance and ability to control their psychoemotional state. The solution we provided did manage to make a big difference, resulting in the students’ improved exam performance. You can now download the games for Android devices, and we’re now waiting to be given the green light for App Store.

As for the product itself, it has already entered the market, though only in small quantities which were sold out in two days. We will make our next batch bigger and come February-March 2019, start to manufacture our technologies in China to lower the prices

Our key promotion strategy is to gain the support of stakeholders and launch on new markets having already developed local supply chains. In Russia, we’ve already made arrangements with several kindergartens so that kids could use our products to interact with the new reality and the world of Neuronet. Another of our collaborations is with higher education institutions and research centers.

After we get all the certificates, we’ll branch out to the medical market. Our first aim will be to target the disorders of the motor cortex responses: developments in this area can play a huge role in restoring the brain activity of people affected by strokes.

Transcranial direct current stimulation (tDCS) is one of the most effective technologies for facilitating the recovery of stroke sufferers. But it can also benefit non-patients, for instance, helping sportspeople to develop their physical abilities, and foreign language learners to ease the memorization of new words and improve their fluency. The technology offers a wide range of effects depending on what areas are stimulated, and with which intensity of the current.

We decided to make a foolproof device for healthy people which would cost less than any of the Western analogs available on the market. We called it Brainstorm. It is aimed at stimulating different areas of the brain in order to achieve different positive effects based on what the user’s individual needs are. The device can enhance memory concentration, improve math skills, and act as an energy booster.

To evaluate potential market demand for our invention, we launched a crowdfunding campaign at the Russian platform Boomstarter. We were glad to discover that it proved to be popular among both the general public and the media. The campaign has come to its close, and we’re now selling our devices on the mass market with a modest price tag of 6,000 roubles. Our main audience are white collar workers, engineers, IT specialists. Geeks, in one word.

I can’t say that we’ve already reached all the doors we could in Russia: offline stores still remain a bit indifferent to our product. But we’re also starting to look into the European markets: we think that there’s a lot of potential for us there.