Stefano Stramigioli first got into robotics after watching Star Wars as a kid. Today, he is the chairman of the Robotics and Mechatronics Group at the University of Twente (the Netherlands). Last year, his research team developed the world’s smallest breast cancer diagnostics robot. The group’s researchers collaborate with major companies like KUKA and Siemens, and develop drones and other robotic systems. Prof. Stramigioli, who is co-heading the ITMO Bio-mechatronics and Energy-Efficient Robotics Lab and recently came to ITMO University to give a series of lectures for students and young researchers, sat down with us to talk about medical robotics, working with ITMO, and finding inspiration. 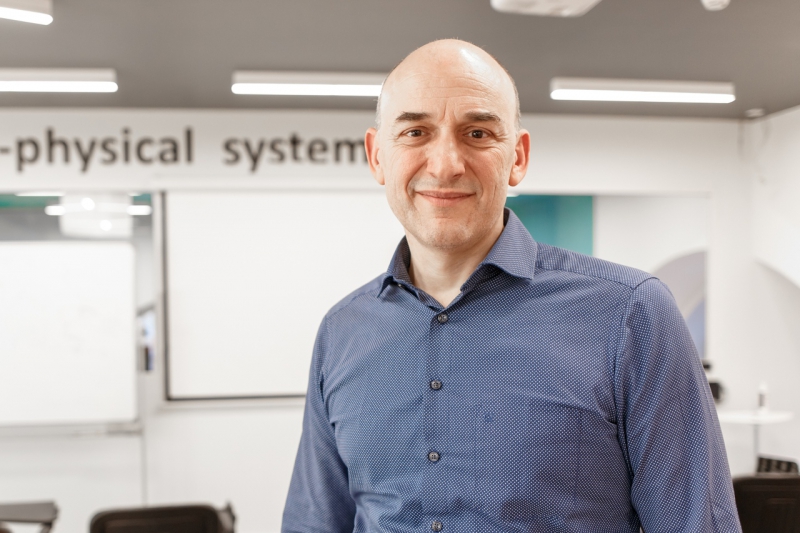 What are the key areas of research that you work in with the Robotics and Mechatronics group at the University of Twente?

Everything I work on at the lab has to do with the methods I developed when I conducted medical research: namely, the design of devices used to diagnose oncological and cardiovascular disease. Speaking of oncology, we’ve already developed a unique breast cancer diagnostics robot; it’s the smallest and most efficient biopsy robot, and it can be used in combination with an MRI unit to conduct precise diagnostics.

Another project, called MURAB, of which I am a coordinator, is funded by the European Commission and carried out in collaboration with KUKA, Siemens, and other major corporations. Its aim is also to help diagnose breast cancer and muscle tissue diseases. There is another project which I plan to launch, and I am currently in talks with experts on cardiovascular disease.

That’s just medicine. As for other areas of science, we also work with drones a lot. We develop drones that can be used in different configurations and be equipped differently depending on their work environment. Finally, we have some unique developments in the field of pipeline diagnostics.

Last year you presented Stormram 4, a miniature 3D-printed biopsy robot. At what stage is the project today? What results have you been able to achieve?

It is indeed a very small, and yet highly efficient, robot, made entirely with plastic. The latter part is crucial, as that’s what allows it to work inside an MRI unit. Conducting a biopsy during an MRI scan greatly increases its accuracy: it lets us see the abnormalities in the tissue, locate tumors and direct the system to that area. We continue to develop this project and are also trying to market it.

Our next task is to start clinical trials; we already have a functioning device but have not gotten to test it. We have an established relationship with some hospitals, and there are a surgeon and two radiologists on my team. We have close ties with medical specialists, so I don’t expect there to be any issues. But, of course, we need to test the device completely in regard to patient safety. It’ll be a long journey, but we’ll get there.

How does the medical community feel about such projects?

They’re enthusiastic. This kind of research is done by engineers but motivated by doctors. Engineers know how to find solutions to existing issues, but it all comes from the needs of medical specialists and the challenges they face in their practice.

According to various sources, the most rapidly-developing field of robotics in recent years is industrial robotics. Indeed, even fully automated production plants are no longer a novelty to most people. But what about service robotics? What are the prospects for that field?

The International Federation of Robotics regularly compiles and publishes statistical data on robotics markets. Indeed, industrial robotics is still growing, but there is a big leap expected to happen for service robotics, which includes pretty much all non-industrial devices. Medical robotics is also about to explode, even despite the fact that it’s a tough field to develop due to high safety requirements.

What about societal fears? Year after year the press talks about “robots taking our jobs”. What’s your take on that?

These conversations have been going on for quite some time; I even had a TED talk about this.

The issue is that society and mass media have certain misconceptions about the capacities of technology. Many get their ideas of technology from science fiction, and people tend to associate robotics with AI. Another misconception is that they think that AI is capable of much more than it can actually do right now. It is developing well, but even still it is only capable of little more than recognizing patterns; things like complex semantic analysis are inaccessible to modern AI.

How did you start working with ITMO University?

It was all thanks to Romeo Ortega, whom I’ve known for many years. He told me about his collaborations with ITMO University. I also know other renowned scientists who work with ITMO.

At some point, he told me that ITMO University is planning to open a robotics lab headed by Sergey Kolyubin and that they were looking for robotics experts to create an international research center. I was glad to be invited and I believe that our partnership has been very productive.

You co-head the International Laboratory of Biomechatronics and Energy-Efficient Robotics together with Sergey Kolyubin. What are your future plans for the lab?

Sergey and I have already discussed that and decided that biomechatronics with a focus on locomotion (the combined movements that allow humans and animals to traverse their environment, e.g. walking, flying, swimming, etc. – Ed.) would be a great topic to work on. Our team at the University of Twente isn’t working on that particular topic right now, so it would be great to use my experience to do something new here in St. Petersburg.

Even though I’m not in St. Petersburg all the time and only come here a few times a year, we always stay in touch. If my students want to discuss their ideas, they send them to me. But, of course, when I’m here it is much easier to collaborate. The course I teach at ITMO University has PhD and Master’s students alike, and I think it would even be good for Bachelor’s students.

You mentioned in an interview that you got into robotics after watching Star Wars. How did you learn that this was your calling?

I’ve always been a geek and enjoyed building gadgets. I’ve done that since I was four or five. I was 12 when Star Wars came out. And you know, I realized: robotics is fascinating because it lets you give machines life.

I think this is a field that has every science in it: electronics, mechanics, computer science, physics, mathematics. Robotics is very interdisciplinary, and that’s what drew me to it. When I saw R2-D2 and C-3PO, I knew that this is what I wanted to make.

Here in Russia kids often start learning robotics as early as in elementary school. Is it the same in Europe?

It’s becoming increasingly popular and, I believe, will continue to become more widespread. There is still a lot of imbalance in education, especially at the early levels. What I mean is who teaches, how they do it and what they teach. Technologies are seen as a tough subject to learn, but that’s nonsense. Perhaps the people who teach it aren’t that good; they either don’t know how to present it or don’t show any enthusiasm and bore their students.

What do you think is the best way to get kids, or students, into robotics?

People think that technologies are difficult, but they are actually anything but that. You just need to explain it to them in a way they’ll like. Of course, we’re all different in terms of intelligence, but everyone can do everything if nothing is stopping them. Up to a certain level, it’s not that difficult.

It’s easy to get little kids into technology by teaching them to think more algorithmically, to take part in activities where they can program the most basic robotic mechanisms. If they like it, the rest will take care of itself.

And where do you find inspiration in your everyday work?

In new things, in learning. There are three aspects to my work: research, management, and teaching. I love to teach and to inspire others, and I think that inspiring, not explaining, is the key to teaching. After all, there are plenty of other sources you can learn from around you.

I believe that you can only do good research if you invest more time in learning. Learning is what inspires me. Without it, you risk getting “rusty”. Read more, observe things, try to find new models and ideas. Creativity is nothing but a combination of knowledge and past experiences. So, if you want to get creative, collect the kind of knowledge you can use later.