Right now, the Skolkovo Innovation Center in Moscow is hosting Startup Village Skolkovo-2019. ITMO University’s Art&Science Center has become a partner of this year’s event, which unites science, technologies and art on one unique platform. Leading scientists, representatives of the creative industry and authors of projects at the intersection of science and art will meet at the Skolkovo venue to discuss the central topic “Art&Science – the territory of foresight”. Key speakers include ITMO University professor Ekaterina Skorb, head of ITMO University’s Art&Science program and head of the Contemporary Art Department at the State Hermitage Museum Dmitry Ozerkov, and organizers of Russia’s largest street art festival Stenograffia. 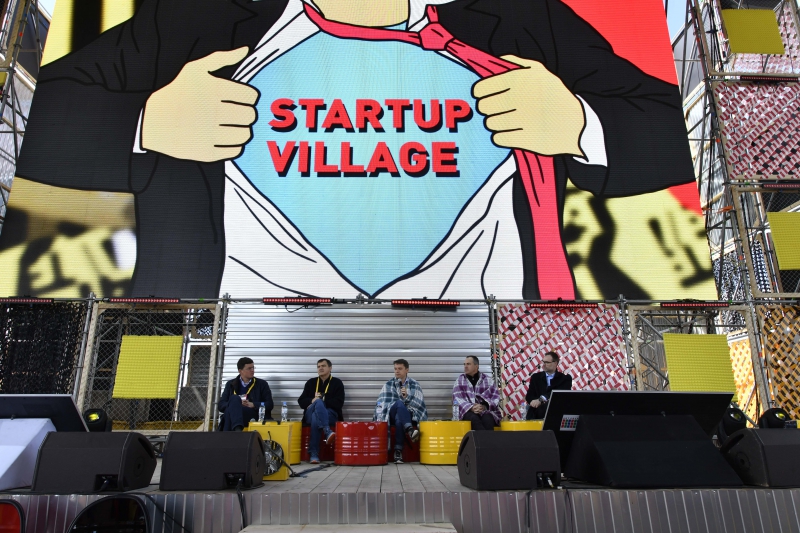 Introduced in 2016, Art&Science Day Skolkovo is organized as part of Startup Village, an international conference for technological entrepreneurs. This year’s conference takes place at Skolkovo on May 29-30 and is expected to gather some 15,000 participants. The organizers have planned over 150 sessions on latest technological trends, the development of new markets, and integration of breakthrough technologies in regular business practice.

Each year, Skolkovo brings in guest curators to help implement this ambitious program. But while previously this important role was given to independent experts only, the 2019 Art&Science Day is being coordinated by an institution: ITMO University’s Art&Science Center.

“Art&Science Day Skolkovo is a unique event that includes meaningful discussions on a wide range of topics such as interdisciplinarity and potential collaborations. For the first time ever, this year’s festival is coordinated by the team of ITMO University’s Art&Science Center. It’s a peculiar precedent: previously, only independent coordinators were invited to contribute in this role. Interestingly, this year’s Venice Biennale follows a similar trend, with Russia being represented by the State Hermitage Museum instead of an independent curator. Our team worked on the main concept of the event, guided its development, chose the speakers, and served as the moderator for the discussions there,” comments Anastasiia Yarmosh, director of the Art&Science Center.

The 2019 Art&Science Day is hosted under the banner of “Art&Science – the territory of foresight”. This topic encompasses a wide range of questions, from searching for new approaches in education, science and business through the means of creative experiment to the analysis of cases of successful collaboration between artists, the business community, IT teams, and scientists.

Among the key speakers at the event are leading scientists and experts in the field of contemporary art. For one, professor at ITMO University’s ChemBio cluster Ekaterina Skorb will talk about the application of creative approaches in the creation of the so-called “artificial cells”, as well as discussing the successes in the collaboration between scientists and artists in Russia and the US. In his turn, Dmitry Ozerkov, head of the Department of Contemporary Art at the State Hermitage Museum will expand on innovations as a promising art method, focusing on technological art related to the field of hi-tech (including big data, machine learning, robotics, bio) and analyzing the specifics of working with hi-tech forms as an artist.

According to Anastasiia Yarmosh, the team made special effort to bring together in dialogue the representatives of polar fields: researchers working in the vanguard of modern science and representatives of the art community exploring humanities discourses as part of their professional activities. The resulting discussion is aimed at developing common approaches in the realm of Art&Science and reaching a joint understanding of the goals and prospects of the field.

Providing an example of a successful Art&Science project will be the team of Russia’s largest street-art festival, Stenograffia, represented by Anna Klets and Andrey Kolokolov. Conducted together with the tech giant Yandex, this project displays the first street art created by AI and a robot. The speakers will discuss the implementation of the project and the difficulties they faced, give their take on the strengths of technical and artistic projects, and walk the audience through the steps of developing a technology via prototyping and creating complex art objects.

The program of this year’s Art&Science Day also includes the discussion “Art – terra convergiate”, which will invite the participants to look at art as a territory of interaction between innovative projects, business and creative teams. They will also consider different formats of such work, specifics of the collaboration, as well as possible risks and forecasts.

Art&Science Day is predominantly oriented at the technological cluster: constituting the lion’s share of its audience are developers, innovators, entrepreneurs and startuppers, young scientists and students majoring in the field of tech. As noted by Anastasiia Yarmosh, this results in a dynamic, active environment which is open to dialogue and represents all topical areas in the field of modern technologies, from IT, biomedicine and nanotechnologies to rational energy consumption, innovations and many others. Taking part in Art&Science Day provides them with the opportunity to discuss key trends in their line of expertise, as well as an impetus to launch their own innovative projects at the intersection of science and art.

“Above everything else, the event shows that Art&Science is one of the main platforms that can lead to the creation of novel, trailblazing approaches and technologies. That’s why the agenda of the festival revolves around uniting scientific and business approaches, as well as a strong practical focus embodied in a multitude of real-world cases. Nowadays, many major companies have already started to branch out by creating their own Art&Science labs. The field of Art&Science is not just about art, it’s also about thinking outside of the box, and participating in this festival can inspire young entrepreneurs to develop their own projects,” says Anastasiia Yarmosh.

Contributing to the implementation of Art&Science Day won’t be the only time that the team of ITMO University’s Art&Science Center has collaborated with their Skolkovo colleagues. They are already working on creating a joint educational project together with Laboratoria Art&Science Space. The latter is Russia’s first nonprofit exhibition and research center that aims to promote interdisciplinary collaborations between modern art and science. Other priorities of Art&Science Center include the development of their collaboration with industrial partners, namely major companies of the Russian north-west.

“As of now, we’re exploring two strategically important directions. The first is expanding our partner network in Russia: we’re actively interacting with like-minded universities and centers all over the country, which allows us to develop the field of Art&Science from the viewpoint of educational initiatives. The second includes working with our industrial partners in Northwestern Russia. It’s important for us to engage in a dialogue with the business community, to cooperate with local companies,” explains Anastasiia Yarmosh. “It seems that we have finally reached the point where business has become receptive to the ideas and concepts of Art&Science. Back in the day, we were starting with educational projects, but now that the representatives of the business community have seen that the state actively supports new educational formats and regards these as a promising opportunity for future technological breakthroughs, they have been emboldened to respond to novel ideas.”