Last week, the first FUTURE ART festival was held in St. Petersburg. The event explored the cutting-edge sphere of BioArt, an Art&Science current encompassing the synthesis of artistic, scientific, creative, and technological methods of contemporary art-making. BioArt adherents work with live materials and organic processes. In her FUTURE ART lecture, art expert and head of ITMO’s Art & Science Center Anastasiia Yarmosh talked about how the technological art changed over the years, in which direction it is now heading, and what questions it deals with today. 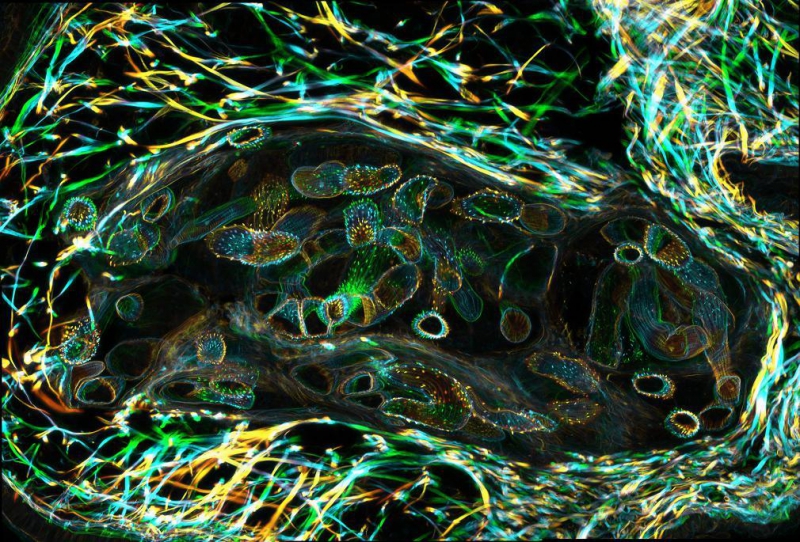 Art&Science has now become one of the trendiest spheres of both art and life: laypeople frequent galleries and museums to get in touch with contemporary art, while more and more artists choose to pursue this direction and want to learn all about how they could use technologies to boost their work. Modern scientific breakthroughs create a new kind of language which artists can draw on, but, however interesting and visually appealing this language may be, it’s important to look deeper and try to understand how these changes affect humankind, and what we lose or gain from this convergence of science and art.

The popular belief that scientific art emerged in the beginning of the 20th century when artists first started playing with different technological experiments, or, likewise, in the rapidly developing Silicon Valley circa 1960’s, is fundamentally wrong. Scientific art dates back to as early as the Antiquity; artists of all times had this interest in technologies. Classical sculptors could have never created masterpieces of the likes of the ultracomplex Athens Acropolis if construction techniques and materials hadn’t been sophisticated enough. Art-makers have always worked with technological discoveries of their time to capture historical developments and speculate about the future.

With decades passing, this symbiosis between art and science becomes more and more convoluted. While even the most progressive 17th-18th century thinkers stayed within the realm of classical philosophy with its key questions of what’s wrong and what’s right, in the 20th century, humans started to doubt whether they really are the apexes of creation they always thought they were. The 21st century inhabitants are much more informed than any of the previous generations, all thanks to the education system going mainstream: every school student knows more than a leading Age of Reason scientist did. When biology became a given, chemistry, physics, and other scientific areas emerged, which made people smarter and changed the world forever. Art&Science and BioArt in particular is an attempt to put the clever 21st-century human on a par with the modern science that develops in a rapid-fire pace. Art has always played the role of a mediator conveying what’s wrong and what’s right in direct speech. Now, however, with audience becoming more intelligent and nuanced, art has to find a new language to address it.

Another problem that is inherent to this complex interaction between art, science, and people, is the question of whether art should be accessible to the masses. For a long time, from the Antiquity up until the 20th century, the European art tradition assumed that high art belongs solely to the elites. It was only in the 20th century that the first public museums and galleries emerged, inviting the wider audience to the hitherto restricted art space. Now the Venice biennale is attended by thousands of people with different social and cultural backgrounds; contemporary art is becoming the 21st century’s popular art.

To highlight societal problems and create topical art, modern artists have to come up with complex, unique, and exact ideas that would stand out from millions of others without being reduced to the mass-market scale, which will extinguish them. One example of the death of art is photography: created in laboratories as a technical foresight, in the 20th century the art of photography sank to the mass-market level. Massification of technologies leads to the destruction of the artistic language.

How to formulate a unique author’s voice so that your work would be relevant, but still keeping its mystery? The difficult search for artistic concepts and meanings is closely tied with the human-technology interaction: the more common the technology is, the more difficult it is for an artist to retain their individuality. On the other hand, it is the artist’s responsibility to create content that connects the wider public to modern technologies. It’s a vicious circle: if we give people insight into how a technology works, it enters the mass market, and the public’s interest in the artist’s work quickly fizzes out.

The aesthetics of modern scientific art is founded on the principle of converging a range of high-tech approaches in one artistic work. The principle of convergence is so paramount that it becomes the new rule of artistic harmony, superseding the sacrosanct golden ratio. Creativity also plays an increasingly important role; a 21st century artist doesn’t only paint pictures and cast sculptures, but is a creator in their own right.

Art and technology merger was very well received by the early 20th century audiences; by questioning the emerging interaction between the living and the inanimate, it tapped into the spirit of the times, marked by the rise of genetics and cybernetics. One of leading practitioners of cybernetical art, the British scientist and artist Gordon Pask developed a range of performances featuring robotic constructions which were activated by changes in the sound and light environments brought about by ballet dancers’ movements. These experiments continue to be carried out today, with the technique being the only difference: modern artists use neural interfaces that can control movements of both objects and people. In as little as fifty years, people replaced inanimate constructions in being objects of artistic experiments.

Late 20th century saw the emergence of first digital devices for transporting people to virtual reality. The American artist Bill Fontana’s work is a prominent example of the digital art popular in 70’s-90’s. In 1983, the creator decided to explore the theme of sound ecology and set in motion a very technologically complex project that involved registering the sounds in the vicinity of the always-busy Brooklyn bridge and transmitting them in the Central Park, an oasis to which the New-Yorkers escape from the hustle and bustle of the Big Apple. The artists submitted the city dwellers to a technological horror, inviting them to think about the problem of noise pollution. Bill Fontana continued this thread with his 2017 project that this time depicted the horrifying screeching of the dysfunctional Lisbon bridge, dividing the sounds into separate tracks that included the sounds of car tyres, metal, and water, among many others. Spectators could use these tracks to create their own sound harmonies, lifting one sound category and lowering others. The experiment proved how warped humans’ understanding of a harmonic sound has become: many participants favored technogenic sounds over natural ones. But the digital art has also left the niche art cybernetics and joined the mass market; now we think of VR and AR technologies as a superficial art.

90’s marked the shift to obscure hybrid art and BioArt, in particular. This was the time of the rapid development of bioinformatics, bio-hacking, and synthetics, and all the scientific research and practical art-making veered towards these spheres. This kind of art has a very unsettling effect on people as its leaves the artist’s personality out of the picture, centering on the ‘new superhuman’ conditioned by technological artistic foresights. This approach to mapping-out of what’s to come can be perfectly illustrated by hybrid art, which bears on biorobotics and other forms of bridging living and non-living matter.

Two years ago, leading BioArt creators Louis-Philippe Demers and Bill Vorn came to Moscow to showcase their Inferno experiment addressing the question of will in art. Participants of a techno rave had to put on an exoframe that was connected to other exoframes through a neural network. This exoframe construction was controlled by the experiment authors, making participants give up their will for the duration of the experiment. By doing this the artists wanted to explore the issue of how free society members really are.

While the idea that a person’s body is exclusively theirs is open to disputes, most people agree that our DNA is our only personal belonging. One advocate of this tenet is a bio-hacking artist Heather Dewey-Hagborg, who, in a 2014 experiment, collected objects with DNA traces like cigarette stubs and chewed bubble gum from the streets of New York and used them to recreate their owners’ portraits based on obtained biomaterial, thus also raising the question of one’s personal freedom.

Our hybrid-art dominated era pushed aside posthumanist ideas of the 70’s culture scene, bringing transhumanism to the center of artistic and societal discussions and making us think about what we are and where we fit in the hierarchy of all biological species living on Earth.