On September 2-3, ITMO University hosted Introduction Days, an orientation event for first-year Bachelor’s and Master’s students familiarizing them with the education process at the university and the opportunities it offers. The students took part in interactive sessions focused on introducing them to each other and teambuilding, attended lectures by leading ITMO scientists and learned about how to go on a semester exchange abroad. 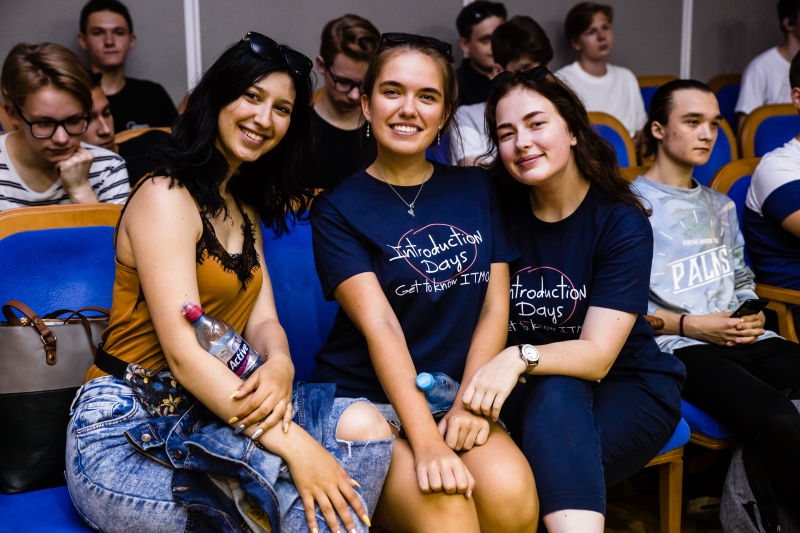 Held for the first time this year, Introduction Days was a large-scale orientation event for ITMO University first-year students. On September 2-3, all Bachelor’s freshers were divided into 24 teams with 70-80 people each and then partook in an extensive and fun program held at two ITMO campuses: on Lomonosova Street and Kronverksky Prospekt.

Such orientation events is a usual practice at large western universities with a significant number of international students, which need to introduce the newcomers into university life in a most expedient and comprehensive way possible. According to Evgeny Raskin, one of the Introduction Days organizers, head of ITMO University’s Youth Policy Office and head of the Kronbars sports club, ITMO has long been experiencing the need to hold a similar event.

“As soon as enrollment lists appear in August, we are faced with an avalanche of student emails and calls asking which dormitory to go to, where to collect their student ID and travel card, and how to get a special scholarship. This queries only multiply on September 1. So, it became clear that traditional approaches such as meetings and others didn’t hold up in a situation with such a huge amount of people. This was the reason that we decided to hold an event like this one, with the primary goal to make students’ lives easier.”

Introduction Days, continues Evgeny, pursue several key objectives. Firstly, this is informing students about various opportunities available at ITMO University, and the way that their education path will be built. The work in this direction was prompted by the changes in the implementation of the education process at the university: starting from last year, the student curriculum was expanded with such educational modules as entrepreneurship culture, philosophy and thinking, foreign languages and others. While last year, students sometimes found themselves at loss as to what to sign up and how, in 2019 ITMO’s administration decided to tell them about all the opportunities from the very get-go.

The second objective is to bring students together. That’s why there are 24 teams, each consisting of three-to-four study groups from different schools. It is thus that the university develops interdisciplinary links among students.

Another goal is to acquaint the participants with the adapters. Each study group at ITMO University is allocated with its own adapter, or coordinator: a senior student that over the course of a year works with their first-year students, familiarizing them with the university life and resolving all questions that arise. This practice has been in operation at ITMO for five years already, and during Introduction Days, adapters met their group and traveled through different stations of the event together.

All in all, the event included six stations, each dedicated to a specific topic:

Each section consisted of not only lectures but also interactive activities for first-year students. For example, at the Teambuilding section, first-year students introduced themselves to one another, launched paper planes and carried out different tasks in teams, while the Science section had them asking questions to the university’s scientists. Among the latter was Mikhail Kurushkin, an associate professor at ITMO’s ChemBio Cluster.

“We have managed, so to speak, to help freshers get into the swing of things so that they tune into the right mindset for the studies at the first non-classical university. The most important thing for us is to let them know that they have to start thinking about their scientific reputation from their first day at the university onwards. Graduating from their Bachelor’s studies in 2023, they probably won’t have a clear-cut understanding of which way to move forward. In order for them to have a larger choice of options, what’s crucial is to create a balanced and diverse scientific and entrepreneurial background. Papers, participation in scientific conferences, grant applications and presentations at Science Slam events: all of this will increase their opportunities in the future. They have to start acting on it now to ensure their success in 2023,” comments Mikhail Kurushkin.

There was a separate Introduction Days event for first-year Master’s students, too. It was shorter in program than the Bachelor’s one, taking only a few hours on September 2, but still allowed the students to listen to lectures by the university’s research staff and learn all about the laboratories and organizations existing within the university’s walls. Next year, promises organizer Evgeny Raskin, Master’s students will get their own comprehensive program with a number of interactive zones.

ITMO.NEWS has talked to the first-year students to learn first-hand about their reasons for choosing ITMO University and impressions of Introduction Days.

Back in the tenth grade, I started thinking about which university to apply to and decided that ITMO would be my best bet. I’d read a lot about the university and identified it as the most promising for me. Enrolling was pretty hard, as I only started my preparations for the physics exam at a month’s notice, but I did it in the end. I liked the Introduction Days format: it shows that the university prioritizes active interaction with students.

I’m really glad that Introduction Days were even hosted for Master’s students in the first place. The event allowed me to learn about the education process and what could help me in my studies. What I also enjoyed were lectures by the staff of different university units, for example, the Institute of Design & Urban Studies and Digital Humanities Lab. It was interesting to listen to these specialists because I plan to dedicate my future career to science communication and working with scientists from a wide range of fields.

For my Bachelor’s degree I studied at Peter the Great St. Petersburg Polytechnic University in the specialization “Mechanics and Mathematical Modeling”, but grew sick and tired of mechanics; what’s more, my main aim initially was to develop in the field of maths. That’s why I decided to catch up with what I’d missed out on in my Master’s studies at ITMO, which I chose because it seemed like a very student-oriented university. I can’t give any in-depth judgments yet, obviously, but it’s great that the university hosts such orientation events like this one. What I wanted to learn about first and foremost were international academic exchanges. I also plan to participate in an internship alongside my studies. I don’t expect that the education process will be simple, but I’m used to challenges.

I am an infectious disease physician by my first education, but a number of factors prompted me to change my professional field and apply to ITMO University. The first one is the Russian healthcare system, which is very hard to work in. I also wanted to have an on-the-move profession that would allow me to travel to other countries. But the main reason behind my applying to ITMO is my desire to pursue science. And ITMO’s Bioinformatics and Systems Biology program offers all that to people with a biology background. I don’t know yet what research to conduct, but I’m leaning towards the field of infectious diseases. What attracted me to Introduction Days was the opportunity to learn about the elective disciplines on offer, to then make an informed choice of the most suitable ones for me.