Games and Theory: How Mining Company Employees Learned to Develop Strategies Using Their Own Inventions at ITMO

Siberian Coal Energy Company (SUEK) and ITMO University have been organizing professional development courses for the company’s employees for five years. This year was an experimental one as an engineering course on the theory of inventive problem solving created by the University’s experts was added to the usual management course. Read on to learn about the educational process, the most memorable moments of the courses and some other changes to the previous curriculum. 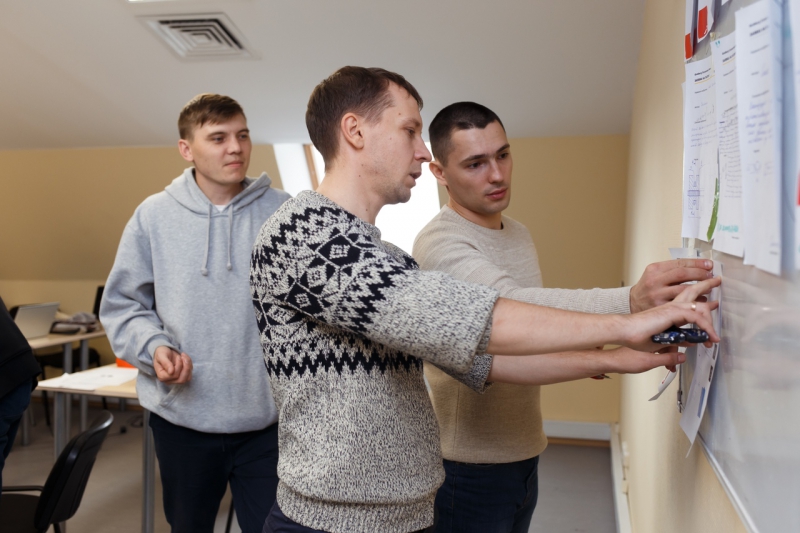 CEO for a day

60 employees of SUEK, one of the biggest coal companies in the world and Russia’s leading coal and energy producer, took week-long courses on innovative management and the theory of inventive problem solving at ITMO University with support from ITMO Technopark. The employees were divided into two groups – a group for each course with each group having its own unique program.

“We have been collaborating with SUEK since 2014 and we have only done an individual management course before. But this year the company suggested creating one more program for rationalizers. The thing is that SUEK holds regular conferences where employees present their projects. These projects are then developed and can even be implemented in the company. That is why the company’s executives are interested in employees who can find out-of-the-box solutions and know how to work with intellectual property. And that is why we launched two programs at once for the first time this year,” explains Maksim Ivanov, an organizer of the professional development course, an employee of the Faculty of Technological Management and Innovations.

The “Innovative Management” group took part in a Data Based Company Management course. The aim of this course was to demonstrate how one can analyze the current state, collect and process economic and technical information using data and then visualize the results of this analysis.

“Our course ended a week ago, but I am still thinking about it. I try to see every process at work through the knowledge that we acquired. I am still amazed by the fact that in just one week a team of experts has awakened our interest, immersed us in data management. I would like to thank Elita, it was impossible not to be focused and present during her classes because she managed to make the seemingly boring numbers and data come alive and speak for themselves. In general, I liked the open format of the course, the fact that we could choose the courses ourselves and talk to our teachers. This week equipped me with new knowledge that I now have to study further and constantly apply the knowledge I get in my work,” shared her experiences Alyona Karpacheva, Social Issues Specialist, A.D. Ruban Mine Office, SUEK-Kuzbass.

The educational process was organized as follows: before the lunch break was theory, followed by cases and problem solving and from 4 to 6 pm the employees took elective courses. This was another feature added this year. The employees could use the liberal education model and learn something that interested them most after doing the compulsory part of the course. One could choose from the basics of 3D modeling, problem solving in Python, advanced data analysis, English for industrial solutions, presentations and public speaking.

In the end, the students could put themselves in the shoes of a CEO for a day. To feel the weight of responsibilities that accompanies every decision made. They participated in a game based on a simulator that recreated all the usual processes going on in a mining company. All students were divided into six teams and each team had to create a ten-year strategy that would lead to an upward trend in the company. They had to develop the production process, their staff and infrastructure to eventually make more money in the game.

The simulator allows each team after analyzing over 150 characteristics chooses the best investments combination, creates a market strategy, hires or fires employees, invests in the environment or technological development. Ultimately the team has to reach a certain profit level.

“I really liked the program, the choice of electives and their applicability, and, of course, our instructors. My favorites were Elita’s lecture on headline business indicators and the course on data analysis in Excel. It was also great to learn to code in Python. I had been dreaming about learning this language for a long time and I was pleasantly surprised to see it on the curriculum,” shared Ilya Galtsev, Deputy Chief Process Engineer, Ural Ugol (Ural Coal).

A special course on the theory of inventive problem solving was created for the engineers’ group.

The theory of inventive problem solving is a set of methods for technical problem solving that allows one to systematize the process of finding a solution to a seemingly unsolvable problem. It is based on 40 general approaches to creating inventions and 76 standard solving patterns. The initial version of the theory was created by a Soviet engineer Genrich Altshuller who worked at a patent bureau where he analyzed some 40,000 patents in order to find patterns in problem solving and the process of coming up with new ideas. He began to develop his idea in 1946 and ten years later he published his first paper on the topic together with Raphael Shapiro. In the 1990s, the theory gained popularity outside the former USSR and was even introduced in several international companies, Samsung being one of them.

“It was an intensive course. There is a lot to learn from the theory of inventive problem solving. I now have a clear understanding of how to set tasks and how to implement their solutions using the theory’s approaches. Creating a Rube Goldberg machine was also very exciting along with coming up with new units and developing new solutions. I was nervous before launching my machine but then I was absolutely delighted to see it actually working, producing the required result. I opted for Presentations and public speaking as my elective course and it was very useful. I am sure I will need this knowledge in the future,” shared her thoughts Elena Maksimova, Legal Advisor, Ural Ugol (Ural Coal).

The course was given primarily by practical experts, engineers who work with inventions on a daily basis. For example, there was a specialist from the Irkut Corporation aircraft manufacturing company.

“The main difficulty was that the theory only covers the process of finding an idea and presenting it. The engineers, however, have to do a lot of work after that, they have to create a mock-up, a prototype and test it. That’s why we decided to add a second, game-based part. Before the lunch break, our participants learned the theory and solved problems and afterwards they developed their own Goldberg machines. Essentially they were working on a closed-loop system that executes a simple task in an overly complicated way, usually in a domino-sequence of interactions. Our students received tasks like drop an egg from a height of two meters and keep it from cracking, make a cube roll around like a sphere or transport an impulse without two objects actually touching each other. They were free to use the equipment of ITMO’s FabLab Technopark,” elaborates Maksim Ivanov.

After the main part of the course, engineers could join their colleagues during electives.

“It was my second time on the program. I can say I liked every detail of the course: I came here for new knowledge and food for thought and that was exactly what I got. I think it was beneficial for me to work in a team of colleagues I hadn’t known before, to practice English and get introduced to the theory of inventive problem solving. By the way, I hadn’t heard of a Rube Goldberg machine before the course,” shared his thoughts Sergey Martyushev, Head of Conveyor Transport Division at SUEK-Krasnoyarsk.

According to Maksim Ivanov, while previously the collaboration only lasted over the course, this year it will go further. ITMO University will support the projects that were created or improved by SUEK employees during the course.

“This collaboration with ITMO University is important for SUEK, and ITMO specialists discuss each program with us, tailoring it to our needs. Several of the couches have even taken part in our forums and conferences, visited our facilities to learn about what our employees actually do and their working conditions. The University does not force any frameworks upon us, but helps us create a course that includes the current and future strategies of skills and knowledge development,” comments Anatoly Fomin, Head of Staff Recruitment and Development Office at SUEK.

He adds that in line with the company’s demand, ITMO University’s specialists have created a simulator game that puts employees in an environment of uncertainty where they are forced to analyze a lot of information in a short amount of time to come up with strategic solutions.

“ITMO’s outstanding experts are Maksim Ivanov, Iuliia Kalnichenko and this year – Elita. Next year, we want to set up our collaboration not in only one season but over the whole year. I am positive it will help us bring some of our ideas to the level of investment projects and implement them in our company,” sums up Anatoly Fomin.