The world's biggest contest in robotics — Robotech-2016 — has just ended in Tallinn. Autonomous robots battled each other in sumo, water races, motor runs and other different challenges. The contest brought together more than 2600 developers from universities and companies, including the members of ITMO's MT.lab, who shared their impressions of the contest in an interview to our portal. 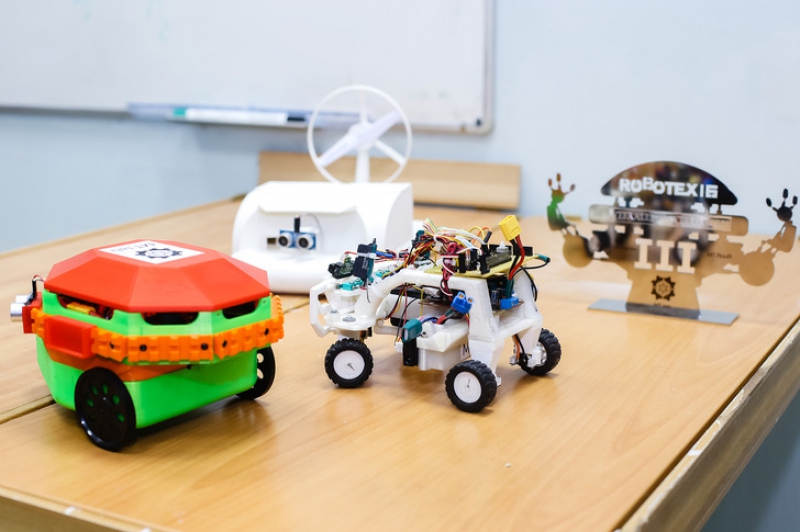 Robotex is traditionally organized by the Tallinn University of Technology. This year, 1 137 robots participated in 23 contests. Apart from the tasks that tested the robot's speed, maneuvering capabilities and sense of direction, Robotex-2016 included such challenges as developing interfaces that would allow controlling robots using brain signals.

An exhibition of modern inventions in mechatronics and robotics also took place during the context. During this event, Dmitry Kupriyanov, a research student from ITMO's Mechatronics Department, and the team from MT.lab presented their MT.Evolute — a prototype of an electronic educational park for studying robotics. The modules of this system are interchangeable and substitutable; also, just any hardware components can be used for this system.

"We are especially interested in this contest because of its technical regulations that encourage the participants to develop their custom robots with original constructions", sharesDmitry Kupriyanov. The MT.lab Laboratory was opened in 2012 as part of the Mechatronics Department. Now, school and university students can join it so as to develop their own projects and participate in different contests. All of ITMO's projects presented at Robotex were created in this laboratory.

For water races, a special water labyrinth is used. One of the most challenging features of this contest is that developers never know the route’s structure in advance — they see it only some minutes before the start. This implies that developers have to foresee any possible problems. For instance, last year the walls of the basin were transparent, so all robots fixed with light sending units for orientation became almost blind. To win the races, a robot has to pass the route three times without turning over or being turned over by another robot, or drowning, sharesBoris Shakhanov, the bronze medalist of the contest. Whether the device moves on the surface or is submerged is of no importance. The robot has to be waterproof, and quite compact, as it has to pass through different obstacles along the route. The speed of the robot is also of essence.

According to Boris Shakhanov, he will have to increase his robot's maneuvering capabilities and the motor's power.

The Folkrace motor runs are a traditional attraction of the Robotex. Five robots participate in a heat. Then, the winners compete with each other. As with water races, the participants don't know the route in advance, and it is fixed with many unexpected obstacles: pits, poles, garbage. This year, the organizers also made the route's surface slippery.

"Our robot had problems with climbing gradients: the wheels slipped. This was a problem, as passing the route in an opposite direction meant losing points",shared Ivan Ustugov, the robot's developer.

Tackling or turning other robots over is permitted as well, which adds more thrill to the contest.

Sumo battles are amongst Robotex's oldest and most popular competitions. The goal is the same as in original sumo — to push the opponent out of the carpet area. There are no restrictions for the robot's construction save for the dimensions and weight: the robot must not be any bigger that 10×10 cm and weight no more than 500 grams. Also, the robots cannot be fixed with anything that can harm the other robot — roboticwrestlers are only allowed to tackle. Overall, most participants bring similar devices — flat robots with a special "hoe" that can restrict the other robot's movements. Most robots rotate around their geometrical center like tanks do and use an infrared sensor for orientation. As in all other contests, the robots have to be autonomous.

"It's was a pity that that our robot didn't get a medal place, but it still won over several others. We've placed our stakes on its motor's power and the size of the hoe. Most of our more experienced opponents had a lot more refined robots",commented Nikita Kopiev, the robot's developer.

ITMO's student also took part in a hackathon during which they had to develop a neural interface for controlling a wheeled robot. There were several different possible options of how to do it.

Initially, ITMO's team focused on using "the power of thought" for controlling the robot, and even developed a working solution based on machine learning. Yet, their prototype was not stable enough in comparison with those that used g-meters, so in the end, they've decided to use it as well. "At first, we aimed at creating the most technologically advanced solution. Then we understood that complexity is of no importance, and the jury minds only the distance the wheel robot makes when being controlled by a helmet. Hence, we've switched our strategy", explained Nikita Koptev.

This was one of the most complex tasks. Few of the robots finished the route, so the jury assessed the results by counting the amount of corners and turns the robot passed. ITMO's team got 4th place, which is a really good result, as the university participated in this hackathon for the first time.