Specialists from ITMO University's MT.Lab created a new educational kit for studying robotics - the MT.Evolute. The system is compatible with most popular robotics instruments and allows school and university students to construct their devices as fast as possible without getting lost in the many different standards. The project's author, ITMO's Master's student Alexey Meshkov, presented it at the Skolkovo Robotics exhibition. In an interview with ITMO.NEWS, he and Dmitry Kupriyanov, MT.Lab's founder and PhD student at ITMO’s Department of Mechatronics , shared about their invention. 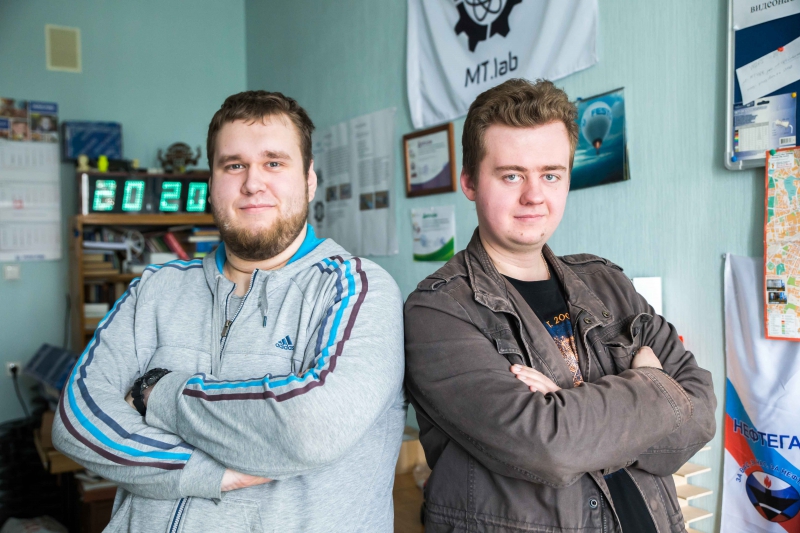 What’s the main problem MT.Evolute is to solve?

Dmitriy Kupriyanov: Many robotics students face a similar problem: there are lots of different standards, and with each year their number grows. We decided to not repeat this mistake and create a complex device that is compatible with most popular instruments. We've been working on this idea since MT.Lab's founding in 2012 - then, we wanted to develop something like a universal rover which can be fixed with lots of different components and work in conditions of a unified environment. We made several attempts, yet couldn't think of any particular ideas.

Later, we understood that the existing robotic kits do not comply with modern requirements and have lots of drawbacks, like outdated programming languages and incompatibility with modern devices and parts. The simplest example is that one can't fix them with new parts, as their connectors imply buying parts produced by particular manufacturers. This is really inconvenient, as robotics made great progress during the last five years, and lots of new study groups and courses appear. We started searching for appropriate systems, but never found anything appropriate. For instance, there's the Lego Mindstorms kit, yet it's far from what’s necessary on the university level. Also, there's the Russian TRIK constructor set; initially, it was Ardurino-compatible, yet later its developers decided to create their own eco-system.

Alexey Meshkov: When I was still a Bachelor's student, we were using the Boe-Bot robotic kit. Even then it was clear that it doesn't offer the opportunities necessary for a good robotics course. And this is how we came up with the idea of MT.Evolute. It took us some time to develop it. At first, I used it for my Bachelor's diploma, then, when I became a Master's student, I decided to apply for a grant. Now that we won it, we are developing the project on a whole different level.

Who did you make the kit for?

Alexey Meshkov: From the very beginning, we were developing our project so as to use it at our Department of Mechatronics. We are going to use it to teach highschoolers and Bachelor's students the fundamentals of robotics. By using the kit, students will have a chance to develop their own projects and learn how different components and controllers interact. Dmitriy Kupriyanov: In a sense, this is a kit for those who do not want to learn the mechanics in much detail. Let's say you have an algorithm and you need to quickly complete a project. What we offer is a platform that can be fixed with the necessary sensors so that you can concentrate on programming only.

Dmitriy Kupriyanov: As of now, the device has four motors and two batteries. Its frame has two areas: the motors, which we don't change during the class, are protected by a lid that's fixed with screws. Yet, there is a special mounting hole under the upper lid, which can be used to mount microcontrollers; there are similar holes along the device's perimeter. Thus, it’s easy to fix it with numerous components without using a screwdriver, which saves lots of time.

Recently, you presented the kit at an exhibition in Skolkovo, and last year, you demonstrated it at the Robotex in Estonia. What has changed?

Dmitriy Kupriyanov: Well, this was the first time we participated in an exhibition in Russia. Before that, we only took part in international events. Last year, we presented our second prototype; this time, it’s our third. By the way, the first one looked like a real monstrosity, and we've gone a long way since.

Alexey Meshkov: During the exhibition in Skolkovo, we had an opportunity to speak to many representatives of different shops, robotic courses and exhibitions. They were looking for new products to distribute on their sites. I have to say that during the last few years, robotics education has progressed a lot. When I only started to get into it, I was a highschooler; then, we only had two study groups in Murmansk. Now, there are many different groups and courses, which means that more and more people are becoming interested in robotics. How do you see your project's future?

Dmitriy Kupriyanov: We already have an Internet address, mtevolute.ru; now, we are actively working on the website: we want to create a platform where people can communicate, exchange codes and such. Also, we will upload different study materials that can be used with our kit. We are planning to do all of that before the end of summer.

In future, when we will completely adjust the kit, we plan to mass-produce it and make at least 10 kits for our laboratory's needs.

Do you plan on commercializing your project?

Alexey Meshkov: Well, we surely consider such a possibility. As of now, we want to finalize our project, implement it into the educational program and collect feedback from students. Still, some people are already interested in it. At the Skolkovo exhibition, we received several proposals and exchanged contacts with potential customers.

Yet, we are currently planning to stick with our initial distribution concept and make it an open source project. All models, programs and study materials will be uploaded on the website and be in free access, so that anyone who is capable of assembling such a device on their own will be able to do that.