Circular economy, Industry 4.0, automation, autonomous cars - we’ve been hearing these terms a lot in the past several years. Still, the interrelations between the associated phenomena are not quite evident. Fabio Bonsignorio, a professor of the Sant'Anna School of Advanced Studies in Pisa (Italy) and one of the leading scientists in the field of biorobotics and future technologies has recently delivered a lecture at ITMO University and spoke with us about how blockchain and robots will change the economy. 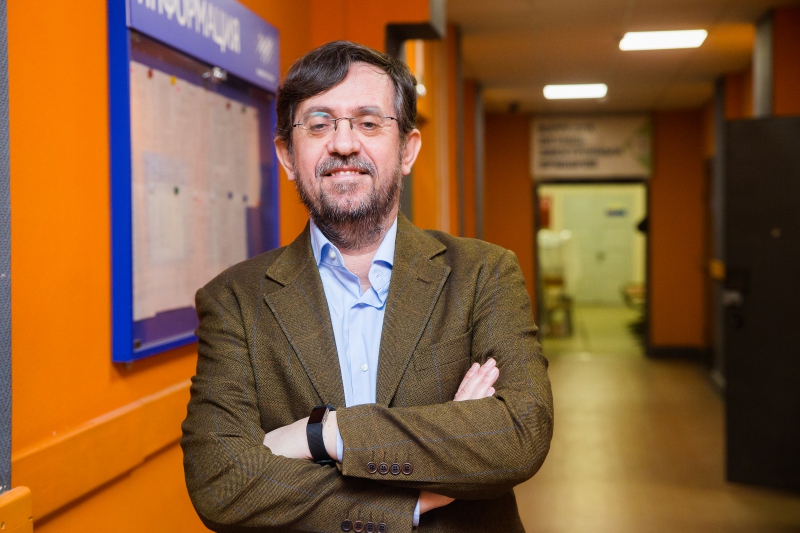 What are you currently working on?

About a decade ago, my colleagues and I started working on robotics research methodology. Nowadays,  still, the common way to publish results in our field is to show something new that a robot can do. For example, how it crosses a room while avoiding obstacles. But what happens if we move these obstacles and make it cross the room again? In most videos and articles on such research, we won’t find an answer to this question.

Such an approach is excusable in the early stages of research in a new field: people are still impressed with the fact that robots can accomplish particular tasks. But as technologies develops, the necessity of applying a  rigorous scientific approach to research becomes obvious and necessary. Let’s say that I want to write an article on algorithms for obstacle avoidance. In order to do that, I will have to learn how many times the robot fell while trying to avoid the obstacles and how many times this experiment was conducted.

Several years ago, researchers doubted if the scientific method could be applied to robotics research at all. I say it’s absolutely essential if robots are to be widely introduced or if we just want to know what is and what is not possible by current scientific knowledge and already developed technologies. Moreover, engineers will  have to communicate with investors, and in order to decide whether to invest money in particular algorithms or systems, the latter will have to know what particular robots can and can’t do.

Does it have anything to do with the DARPA Challenge?

The DARPA Robotics Challenge, which has last taken place a few  years ago, is a slightly different story. DARPAlaunched a contest in order to understand robots’ current limitations. For example, they tested whether an humanoid robot can reach a door handle, turn it at a proper angle and open the door. Or get behind a car wheel. Performing such simple actions is still very hard for robots.

The situation with vehicles and drones is a lot better, as they are already comparatively much more  efficient. You might not know it, but when you're flying on a plane, it is controlled by an autopilot for 90% of the flight's duration. Autonomous cars are a bit trickier. They work fine in 90% of cases, but they are not good at dealing with the so called ‘edge cases’. For example, when the car is halted by police. In my opinion, we have to provide additional instruments to improve their operation, like radio beacons, motion sensors, and well-established vehicle-to-vehicle communication. These can compensate for the fact that autonomous cars aren’t smart enough.

Promoting research reproducibility will help solve those issues, as well. Today, scientists in our field do lots of research on science and technology: they test hypotheses, systems and algorithms and work on projects of their own. But few make use of the work of others, or aim to collaborate in order to finalize them, though this is what you’d call a scientific approach. My colleagues and I seek to change the research practice and publication procedure so that articles would allow reproducibility. In this way, you can replicate them in your laboratory experiments like those at DARPA Challenge.

Was reproducibility the topic of your lecture, then?

Not quite. Another topic that I focus on is the systematic transition to Industry 4.0 and its favourable effect on modern manufacturing.

Modern factories are a combination of machines that operate according to programs and people who perform other tasks that we are not able to mechanize. You have some pre-designed components, and you use them to assemble a washing machine. The program has long been developed, and it’s unlikely to change.

In some five-ten years, all of this can change. Machine learning, Big Data and computer vision will offer production plant  an opportunity to communicate, set tasks and accomplish them on their own. It will become possible for a factory to operate while making the most of resources and catering to the needs of every particular client. Let’s say a customer places an order for a shirt. The system processes it, and machines produce a tailored shirt for this particular customer. Then, all that’s left is to deliver it.

Industry 4.0 will help us cut down on expenses and decrease costs and the time it takes to produce an item. More importantly,  it will turn factories into diversified craft guilds able to quickly respond to changing market demands.

Unfortunately, waste will still be a problem. Today, we collect waste and dump it in designated areas. If the planet’s population continues to grow like it does now and if our children adhere to the same lifestyle as us, Earth’s resources will soon become unsufficient. According to particular forecasts, we may have to use the resources of eight more planets to provide for the whole planet’s population our quality of life and quantity of consumer products and services.

So how can we solve this problem?

That’s where circular economy steps in. Robotized  and smart city infrastructure will help us make recycling more efficient. Naturally, we’ll encounter r problems, both economic and political. For smart cities to operate, they have to make use of personal data. Who will collect and process them? Today, it’s the domain of major corporations such as Google and Microsoft, and we’ve already gotten used to it.

Still, no one would want them to govern whole cities. We’ll have to come up with a new way to conduct information economically relevant transactions in the internet, something free and independent from particular providers. In my opinion, blockchains can become a solution to this issue. Though the financial  bubble of the past two years has made our attitude towards this technology more cautious, it still offers great instruments for settling secured transactions without involving a third party. All that’s left to do is to find a simple way of using this technology within the context of a smart city, a smart supply chain and many other.

It’s only a question of time until someone in, let’s say, Singapore says “Here’s how we can use blockchain for waste sorting!”. Right now, we are at square one, and many countries, institutions, companies and individuals have an opportunity to secure leadership positions in this field. It’s just that people have to soften their stance on blockchain. Shift the paradigm, so to say.

By and large, this is my reason for coming to ITMO University. In my research, be it on robotics or Industry 4.0, I often speak about the future and the changes it will bring about. But it calls for major efforts and rethinking of many values and thought habits. If we want our work in the field of innovations to be efficient, we’ll have to broaden our minds and change our attitude towards technology. We are currently on the frontier of science, and we can expect a new scientific revolution in five or ten years. Or maybe even months, if someone comes up with the bright idea.

Do you have any plans for future collaboration with ITMO University?

Of course. For instance, we are currently discussing the opportunities for conducting Erasmus+exchange programs between ITMO and the Sant'Anna School of Advanced Studies. What’s more, me and several St. Petersburg scientists are working on a few research topics that will generate  highly significant research articles and which will enable successful grant applications and ignite a virtuous circle.