ITMO University has hosted the European Control Conference, one of the world’s largest conferences on control theory. This year, due to the pandemic, the conference took place online. However, according to the organizers this had a positive, rather than negative effect on the number of attendees. 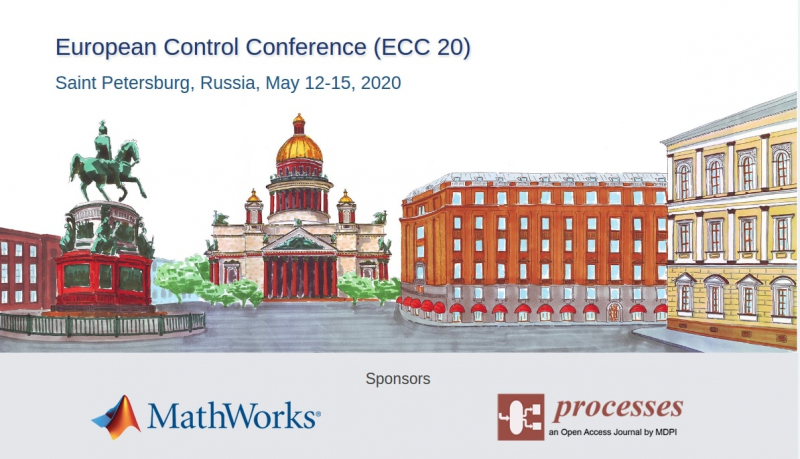 European Control Conference is one of the world’s largest events for researchers working in the field of control theory. This conference was first held in Grenoble, France in 1991, and since then has been held biennially in different European cities. In 2013, the conference became annual.

Control theory as a research field grew out of mathematics. Though the field is currently studied all over the world, it has its roots in Soviet Russia as well in the works of Vladimir Yakubovich (St. Petersburg) and Iakov Tsypkin (Moscow). The first International Congress on Automatic Control was held in Moscow in 1960 with the famous Rudolf Kalman (Professor Emeritus at ITMO since 2015). Since then, control theory has become an independent discipline that is still highly relevant today.

As one of the centers for control theory in Russia, ITMO University applied to host the European Control Conference back in 2016, so there was enough time to thoroughly plan the coming event. The honor to host the conference went to world-famous scientists Alexander Fradkov (Institute for Problems in Mechanical Engineering of the RAS), Alexey Bobtsov (ITMO University) and Dmitry Possel (CNRS, France).

The coronavirus pandemic interrupted the plans at the last moment – as self-isolation was imposed all over the world, the conference had to be rapidly transformed to fit the online format.

“On March 18, we decided the conference would have to take place online. We discussed the closing of borders and the need to hold the event remotely,” recalls Sergey Shavetov, associate professor at the Faculty of Control Systems and Robotics. “We had a vision of how the conference might look online but we still had to solve a lot of issues in a short period of time. We were happy to receive many positive reviews from the participants and guests of the conference.”

Control theory is a multifaceted field of science. It studies the problems of controlling various technical and dynamic objects – from an electric motor to a spaceship, as well as managing processes in biological, chemical, economic and other systems.

“The theory of automatic control makes it possible to control technical objects without human participation (via feedback or evaluation systems),” explains Sergey Shavetov. “In the simplest case, a controller gets the measurements of the regulated variable, compares them to the desired value, and then begins to stabilize and correct the object following a certain law.”

As technologies and robotic systems permeate every field of our lives more and more, research becomes more diverse. That’s why the main program of EEC-2020 was divided into eight independent tracks: control based on data processing; robust control and uncertain linear systems; control for nonlinear systems; cars and robotics; multi-agent systems and cooperative control; optimal and predictive control; diagnostics, identification, evaluation and monitoring systems; applications of control theory in biology and medicine.

“The most interesting report for me was given by Stefano Stramigioli. The ideas and principles he talked about are based on describing energy interactions: using the energy approach and differential equations to describe the interactions between physical and technical objects, robots and their environment,” comments Anton Pyrkin, Dean of the Faculty of Control Systems and Robotics. “They have managed to make their robotic birds reach up to 80km/h in the sky. It was made possible by imitating the flight of a real-life bird at the level of its energy interaction with the air around it – thus, the robotic bird uses wings to propel itself further. This robot is used to scare birds away from agricultural fields and airports. The researchers have succeeded in bringing the real-life energy interaction principles to robots. Who knows, this approach might be used to describe how people interact at the respective emotional level, which might even help with finding the balance in our society.”

Though the conference had to take place online, it didn’t lose in the number of participants but even attracted a wider audience. As the event took place over Zoom, the organizers tried to invite the maximum number of specialists in control theory. The conference included three days filled with presentations by researchers from 47 countries – Germany, Italy, France, Sweden, the US, Canada, Brazil, Japan, Australia and many more.

Apart from 374 conference participants who presented their research, there were also many guests and visitors. All in all, the conference was attended by over 2,000 people – some presentations included around 1,000 viewers simultaneously with young people making up a big part of the audience.

“We have an infographic of the age composition of our participants and viewers,” explains Anton Pyrkin. “Around 30% of the audience fell into the 18-23 y.o. category, and yet another 30% – to the category 24-35 y.o. Which means that over half of our audience were under 35. It means that we are seeing a generation change, and it’s not a dying field of science supported by older researchers, it means that our field is young, interesting and in demand.”

The next European Control Conference in Rotterdam in 2021 and will be presided by a world-renowned researcher Henk Nijmeijer.

Bringing the conference online was made possible by the wonderful students at ITMO, who provided fail-free work of nine Zoom rooms in four working days.

Apart from the main sessions there also was a virtual reception, virtual tours of St. Petersburg and its museums, as well as virtual coffee breaks in the Online Town system.