Last Monday the awards ceremony for the “Professor of the Year” award in natural science was held. The award is given out by the Russian Professor Council and St. Petersburg State University. Anton Pyrkin, Dean of ITMO’s Faculty of Control Systems and Robotics was this year’s winner of the title. As an ITMO graduate, he had worked in the industry before returning to his alma mater to work in academia. He spoke to ITMO.NEWS about robotics in the early 2000’s, how science can be more exciting than business and what modern education should teach about technology. 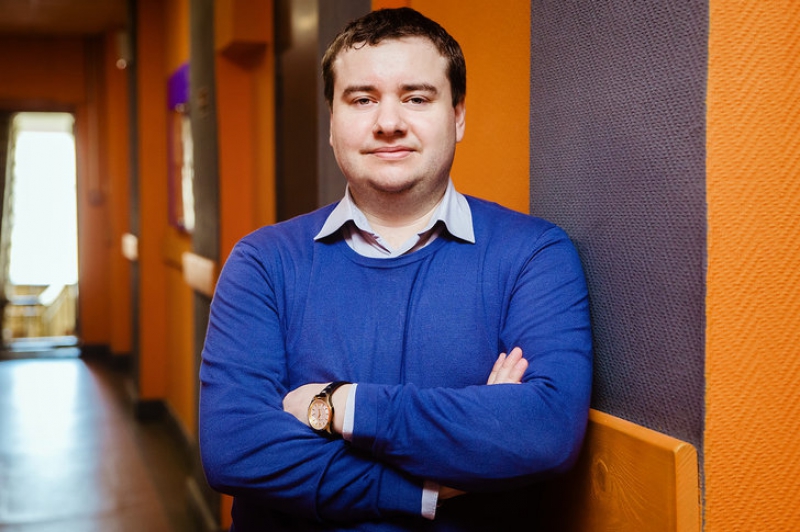 You came to the university back in the early 2000’s, when robotics and IT weren’t as much of a hot topic – and didn’t offer as many opportunities. What made you choose this field?

Back in 2002, when even internet access was something only some of us had, it was already clear that IT is guaranteed to always have a market, that there would be room to grow, assert yourself and make a career.

I applied to the Faculty of Computer Technologies and Control; I didn’t really know what the word “control” meant, but I liked the sound of it. Only later did I realize how many layers there were to it. Still, I chose it because “computer technologies” meant that I’d learn to solve complex technical tasks – and I’m glad I did. As of today, I’ve spent practically 16 years here.

It was only later that the robotics boom happened, when new and accessible technologies appeared. Back then it was quite hard and expensive. And so the realization that I want to get into robotics didn’t come to me right away.

What was your starting point, then?

First we used these expensive mechatronic systems, which were also quite primitive. Still, they got the job done. Later on we got our hands on the more simple robots; we assembled them, programmed them, and even organized a robotics festival. That was a really great event that would always attract more robotics enthusiasts.

Of course, we’d always had robotics at the university, even in the Soviet times; we still have some of them as museum pieces. But 10 years ago when the new stuff came in, it was like a breath of life for the department and we had all the right conditions to start actively developing things. Today we work with a wide range of equipment that’s popular across the world.

Well, robotics, in essence, is the easiest way for a human to enter the world of cybernetics. Theory of automation control tells us how to make objects behave the way we want them to – and do it quick and well. That’s what we teach students. In Russia, we are among the leaders in the field of automated control, both in terms of our theoretical knowledge and the level of experience among our international professors.

Our work involves in-depth studies of processes and controlled objects. And we put that to use in real robotics right away, showing how these things can be used in hardware, to improve industrial manipulator robots, quadcopters or household robots. And we’re not afraid to do orders for external customers; right now we’re about to finalize an R&D project we’re doing for a foreign company.

Therefore we do research to solve industrial tasks. They’re quite simple – like, for example, there’s this sensor that is expensive and also hard to integrate. What we need to do is find a way to remove it from the equation, that is, to find a way to produce the same measurements the sensor makes without actually using it. This kind of work involves highly complex research, as well as practical experiments, but it helps businesses save a great deal of money.

What made you choose science over the industry?

This is a fundamental choice everyone has to make at some point. Some go into management, some into science, some into the industry; whichever they prefer. I’ve tried my hand at all three and know the pros and cons.

I’d spent five years in the industry, working in a major international company; I helped develop and certify automated control systems for watercraft; now I teach these things as part of my educational program. Working in the industry made me realize that there are some limits as to how far I can go in my self-development there. I wanted to solve other issues – ones no one had yet tackled and ones that hold a fundamental, mathematical character. Industrial work usually has a specific goal: to make money and create a product.

I have great respect towards the company I worked at; I learned a great deal about modern technology there, about things that have value on the market here and now. But now I want to do something similar in science: to find solutions that will have value here and now. That includes citations – which show the demand for our work – and orders from third-party companies for research in a certain field.

These days you teach, do research and administrative work. How do you combine all these things?

I can’t say that I have a specific schedule for all these things. Depending on the season, month or week, sometimes there’s a need to focus on one particular field of work. When I’m teaching my classes, I try to focus on making them interesting and accessible, to show students the beauty of science’s ability to solve the most complex things. I want to make them feel like they didn’t come here for nothing.

A teacher must make students hungry for knowledge, to make them see what’s beyond the horizon, what the future holds for them. I try to dedicate more time to the future of this or that technology, so that after they’ve graduated they have a value on the job market. Administrative work has its own specifics, too. You have to consider the university’s long-term development, what it’ll be in three or five years. For me, this past January was spent identifying these areas of development. Right now, most of my time is dedicated to research; once I’m done with this project we’re working on right now, I’ll go back to administrative work. So there’s a place for each kind of work in this cycle. Life itself will tell you when to channel your efforts towards something new.

Speaking of education and guiding students - some of these young people are often left dumbfounded by the abundance of terms and subjects; sometimes they don’t know what they’ll do and how it can benefit their future. How do you explain something like this in the simplest terms?

The easiest way to do this is to provide examples. Everyone these days has a smartphone. Each modern smartphone has up to five controllers, most commonly PID controllers. And what is a regular smartphone made of? Automatic brightness, automatic sound adjustments, syncing – all these things aren’t just programmed; they require lots of mathematical analysis. Even twenty years ago cellphone manufacturers would spend lots of money on research that would help them digitize sound, convert it to analog and remove noise and distortion so that the voice you hear out of the speaker actually sounds like the person you’re talking to.

This and other examples show us that everything around us has elements of automated control. That’s anything that makes its own decisions or simply does things for so long that you get used to them – because it makes things easy. Unmanned vehicles are becoming popular these days, and so are drones. These kinds of technologies will inevitably become more and more commonplace.

These examples make people realize what they came to university for. After that, we help them become part of the process, to control these technologies that are part of our lives.

Including by starting their own projects and companies?

That, too. We teach them how to make their startups and use this or that technology in their business. We won’t refuse someone who wants to become an entrepreneur and we’ll even help them get started. In the case of some projects we even help them develop their ideas and help raise funds.

What are some of the most successful ones?

There is a project we developed at our department called xTurion. They developed a small robot that moves around your house and provides security; it even streams video. So you can always pull out your phone and see what’s going on at home, and even “ride” it around the house. The project received a venture investment and won the Russian Robotics Challenge at Skolkovo, beating 400 other projects.

These days, lots of teams are turning to blockchain technology, trying to stay up to date with the current trends. Obviously, we don’t stop anyone from working on personal projects.

How fast do you think education can catch onto these trends? Should it?

I think that, first of all, we have to understand that there are some short-lived technologies out there that have a year or two of popularity and then they die out. Of course, we keep an eye on what’s popular right now and talk about these things. But the main thing for us is to teach the fundamentals that’ll be around for a long while.

Even though many technological eras have passed, and today we live in the cyberphysical era, it’s still important to approach everything from a fundamental point of view. We teach students the basic, core things, but we also teach them to adapt to ever-changing environments so that they aren’t afraid of change and don’t get stuck in old paradigms.

The industry these days demands a lot of skills from robotics specialists. That includes math, programming, knowing how to use professional tools and equipment. For me, that means that the requirements that major businesses have for applicants is what we should use when developing and honing our educational programs.

We listen to the industry and try to introduce new elements that meet their needs and expectations. For that, we have to work on ourselves. That’s why we do research; we don’t just pass on existing knowledge and our past experiences. We do science so that the things we teach our students meet the needs of today’s world. And it’s science that helps education be a part of the future industry: it lets us realize what to teach today to make these students’ knowledge valuable tomorrow.

What are some of the things you want to focus on in the near future?

Obviously, I’d like to produce something that’s worth getting published in the top journals. But I’d also want to see our technologies used in real life, to see them be more than letters on a page. And of course, I’d like to see more talented kids come to ITMO’s Faculty of Control Systems and Robotics. This is why we put a lot of effort into keeping a lively atmosphere at the faculty.