Scientists Explain Why Paradise State Is Hard to Reach

Authors of a paper on social relations’ modelling have adapted the popular model of human interaction in a society by adding individual preferences. According to the initial theory, human relations may reach a “paradise state” at some point. However, the new model contradicts this idea. 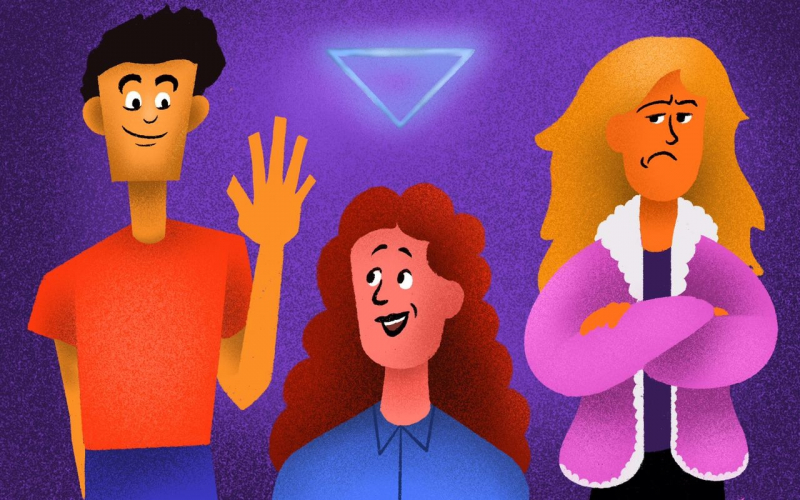 People think that hard science is engaged in numbers, mathematical abstractions, and non-living objects, while the humanities deal with people and society. Many believe that these two research areas don’t intersect. However, several fields of studies prove this to be wrong. One such field of studies is sociophysics. Researchers of this field analyze the processes that take place in society using methods of hard science and mathematical modeling.

The enemy of my enemy

Structural (or cognitive) balance theory that Fritz Heider, an Austrian-American psychologist, came up with, is an important concept in sociophysics. What is it about?

Let’s say that there is a guy named Peter. He likes an object, for example, a painting, but doesn’t like a person called Mary. At some point, Peter finds out that the painting was actually created by Mary. According to Fritz Heider, Peter now has three ways to deal with this situation: he can conclude that Mary is not that bad, that painting is not that good, or that the painting wasn’t created by Mary.

With few details changed, this model also works when we talk about relations between three people.

“You know how they say – “my friend’s friend is also my friend””, says Klavdiya Bochenina, researcher at ITMO University’s National Center for Cognitive Technologies. “It’s an example of Heider’s balanced triad. There are three nodes with friendly (positive) relations. The “enemy of my enemy is my friend” expression is of the same kind. It’s also a balanced structure with three nodes and plus – minus – minus relations. These structures contain internally logical relations, so they are considered balanced.”

However, three-node relations can also be unbalanced. For example, “the enemy of my enemy is my enemy” or “my friend’s friend is my enemy” are illogical structures. According to Heider’s theory, such relations are unstable, but try to become more stable. Simply put, if Peter doesn’t like Mary and Amy, then Maryand Amy can eventually “join forces” against Peter. If Peter likes Amy and Mary, but Mary doesn’t like Amy, then it makes sense for the girls to make peace with each other.

The world of social triangles

This model is relatively simple when it comes to one triangle, but actual societies are compiled out of many such triads. Peter doesn’t only like or hate Mary and Amy, but also many other people. Some of them know Mary, but don’t know Amy, and vice versa.

“Sociophysicists have been using this theory for a long time as applied to complex networks that have lots of nodes and a certain structure of relations between them,” explains Klavdiya Bochenina.

In 2005, a team of researchers proposed to upgrade this model by making it dynamic. Let’s imagine a big group of people that are connected with each other by triangular relations. Peter knows Mary and Amy; Amy and Peter know Hannah, who doesn’t know Amy; Peter and Mary know James, who doesn’t know Amy, and so on. We could imagine lines between them that represent their relations, but are they positive or negative? Are the triads of this community balanced or not?

“If we take a network of that kind and specify the relations randomly, we will see a certain number of balanced and unbalanced triads,” explains Klavdiya Bochenina. “We should specify the rules according to which unbalanced structures will try to become balanced. Here’s how the relations evolve: for each iteration, we randomly pick one of triads. If it’s unbalanced, we change one of its relations. Then we pick a random triad again and randomly change a relation, and so on. If we change a relation in a plus – plus – minus triad, then there are two options: either make it plus – plus – plus, or plus – minus – minus. For larger networks it was proven that if the possibility of the first option is 50% or more (p parameter), then the entire system will reach the “paradise state”, when all the triads are balanced.”

It’s worth noting that such models don’t function in specific communities that include Peter, Mary, or Hannah. Just like the quadratic formula ax2+bx+c=0, these models are mathematical abstractions that are supposed to show the way to reach structural balance of complex social systems.

Friendship based on preferences

However, people aren’t just “nodes” – their relations are more complex than just “plus” or “minus” and, among other factors, they can be explained by reasons hidden in the personality of each person. Scientists from ITMO University, Warsaw University of Technology, and University of California, working together in the framework  of  European H2020 Project RENOIR (Reverse Engineering of Social information Processing), decided to make the initial model even more complex by adding qualities or attributes that influence relations between people.

“These attributes are binary, one either has them or doesn’t – it’s either zero or one,” explains Klavdiya Bochenina. “In our paper, they aren’t sociologically determined – the preferences, gender, age, and so on, aren’t specific. There’s always an odd number of them. If the attributes are the same for the most part, then the relation between two subjects is positive. If not, then it’s negative.”

Then, instead of relations, the scientists randomly changed one of the node’s attributes from unstable triads. So, for example, Peter left St. Petersburg. Then Mary started to listen to rock music. At some point, all these changes will change the relations between them. However, it will also change the situation not only between Peter and Mary, but between them and others as well.

The researchers have been working on this model for about two years. The thing is, once you increase the number of attributes, the calculations become harder and require more power. ITMO University’s computational capabilities were used in order to handle them.

“We used simple parallelization on separate launches, when a big number of model samples with different parameters is being launched at the same time on a multi-core server,” says Klavdiya Bochenina.

As a result, it turned out that attributes substantially change the model’s behaviour.

Simply put, if relations in the community where imaginary Peter, Amy, and Mary live are determined only by their location, favorite football club, music genre, and food preferences, then this community won’t always be able to achieve stable and logical relations in separate triads.