We know that the domestic cat has distant relatives that roam the earth – lions, tigers, cheetahs, and mountain lions. Less familiar are the 38 distinct species in the family Felidae, many with strange names like Pampas cat, kodkod and rusty-spotted cat. The new field of genomics – which engages in the unravelling of DNA genomes of separate species – is resolving old conundrums and revealing new secrets across the history of evolutionarily related species among cats, dogs, bears, and ourselves. Recently, an international research team that includes genetic researchers from ITMO University has completed a study that revealed several fascinating facts about the Chinese mountain cat. The paper on the study was published in Science Advances. 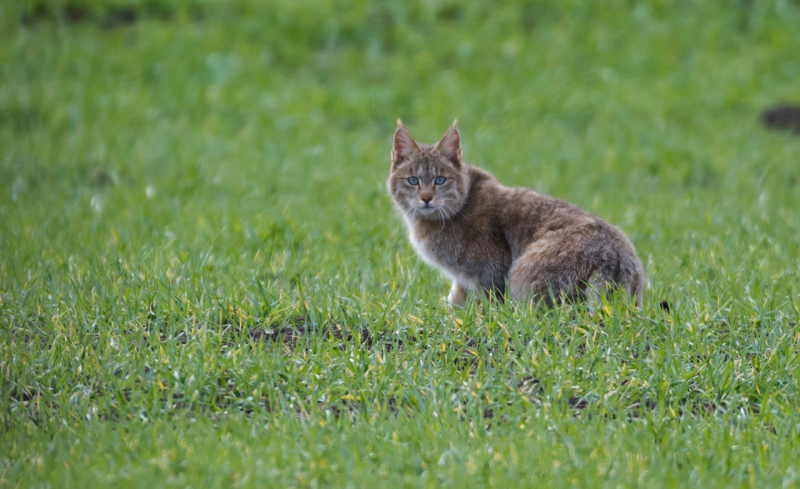 We know that the domestic cat has distant relatives that roam the earth – lions, tigers, cheetahs, and mountain lions. Less familiar are the 38 distinct species in the family Felidae, many with strange names like Pampas cat, kodkod and rusty-spotted cat. The new field of genomics – which engages in the unravelling of DNA genomes of separate species – is resolving old conundrums and revealing new secrets across the history of evolutionarily related species among cats, dogs, bears, and ourselves.

In the largest-ever study undertaken of Chinese cats, genetic detectives highlight the evolutionary uniqueness and premier importance of conservation of the elusive Chinese mountain cat, Felis silvestris bieti, found only in the Tibetan plateau of China. Also called the Chinese desert cat or the Steppe cat, the Chinese mountain cat has a distinctive appearance that includes sand-colored fur with faint dark stripes, a thick tail, and light blue pupils.

The study was led by the Laboratory of Genomic Diversity at Peking University in Beijing and supported by an international team including lead genetic researchers at ITMO University in St. Petersburg, in the USA, and in Malaysia. The research is published in Science Advances. The genomic data resolves a taxonomic classification uncertainty, reveals the timing of evolutionary divergence, and pinpoints the prospects for survival of an important endangered species.

Using 270 individual samples, the molecular genetic study found that the Chinese mountain cat is a unique subspecies of the wide-ranging wildcat, Felis silvestris. The wildcat species is found throughout Europe, Africa, and much of Western Asia. The Felis silvestris bieti subspecies, however, is found only in China, having adapted to the prey and alpine climate of the Tibetan plateau.

Applying the molecular clock hypothesis, the date of evolutionary split between F. s. bieti and F. s. ornata was estimated at ~1.5 million years ago while the genetic distance from both to the closest Felis species relative, the black footed cat, Felis nigripes, is twice that at 3.0 myr ago. These different times support the classification of F. s. ornata and F. s. bieti as subspecies of Felis silvestris. A closely related subspecies from Central Asia and North Africa, Felis silvestris lybica is the clear predecessor of the world’s domestic cats, including those found throughout China. The cat domestication process happened 10-12,000 years ago in the Near East at around the same time and locale when the humankind’s ancestors morphed from peripatetic hunter-gatherers to sedentary farmers in the Fertile Crescent region.

The Chinese mountain cat faces several major threats, one from modern agricultural practices that threaten its precious habitat. A second, more existential threat, is from interbreeding with domestic cats brought by the growing human population in the cat’s limited habitat. And, finally, climate change may be expanding the range of neighboring wildcats into the mountain cat’s core homeland. This study will help conservation scientists to identify threats and decide the best ways to conserve this special cat in its native range.

The study solidifies the taxonomic status of the mountain cat, Felis silvestris lybica, through an analysis of the cat’s genome, placing the cat in an evolutionary context relative to other species and subspecies of cats. These arcane taxonomic distinctions are important for conservation because scientists have to be sure they are all talking about the same animal when discussing strategies and, no less important, because legal protections have to be specific to the group in question. Without an agreed-upon taxonomy, legal protections and conservation come to a stop.

Another important result of this study is the finding that domestic cats in China are derived from the same common stock and origin as domestic cats throughout the world, and that there was not an independent origin of domesticity in China. Previous studies have hinted at close associations between early Chinese farming communities and local wild animals, including Asian mountain cats, and that some of these animals may have begun the crossing from the wild to living with people in settled communities.

What the current study shows is that this did not happen with domestic cats; now, the focus of research can move to determining why. Why were some species domesticated in some places, but not in others? Why did these processes happen when they did, and what were the conditions that allowed, and maybe even promoted, the integration of wild animals into human societies? Answering these related questions will help us understand the history of early China, and indeed the history of the ancient anthropocentric world, in more detail.