Top scientists from Canada, Germany, China, and the US have discussed the future of bioprinting with students, who also were able to try 3D printing with their own hands. Learn more in this ITMO.NEWS article. 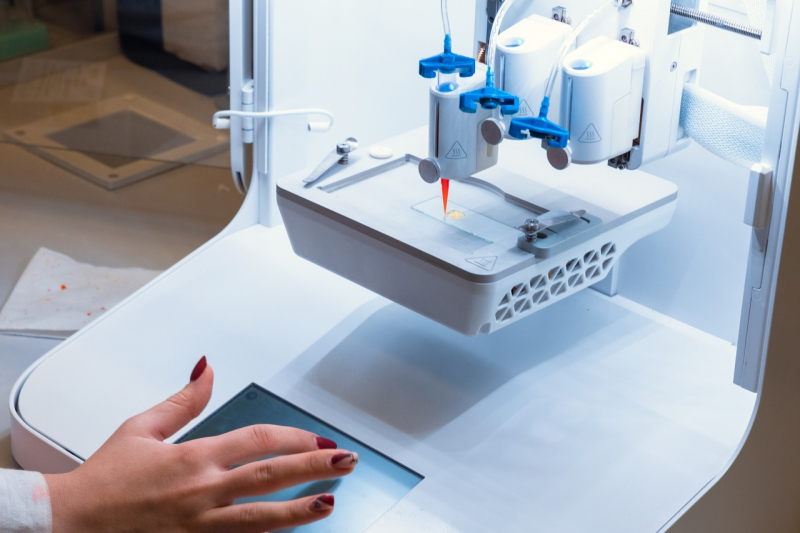 You can quickly and cheaply print basically anything with the help of a 3D printer, be that a toy or a bridge section. However, 3D printing is not limited to hard materials. Biological and biocompatible materials become more and more popular in this field. For example, with the help of such technologies, the scientists were able to print a miniature human heart.

Last year, ITMO University’s ChemBio cluster won a megagrant for development of bioprinting technologies in St. Petersburg in collaboration with Eugenia Kumacheva, one of the leading experts in this field and a professor at the University of Toronto.

Not only lab research is conducted as part of this project but also seminars and conferences are arranged in order to teach students and junior scientists how to work with new materials. BioPrint is one of such events – it’s a large-scale workshop that lasted two days. Leading scientists from four countries have shared their knowledge with the participants.

“We have developed a format that includes five lectures and a practical lab class on bioprinting,” says Mikhail Kurushkin, one of the workshop’s organizers and Dean of the Faculty of Biotechnologies. “As a result, we managed to bring together leading scientists from all over the world with an average h-index of 59.”

In the course of two days, the workshop attendees were able to visit lectures by top researchers from the US, Germany, China, and Canada.

“Sergei Sheiko (University of North Carolina at Chapel Hill) talked about bioprinting ink design and Zhihong Nie (Fudan University) discussed interaction between ink particles in colloid compound,” explains Sofia Morozova, local chair of the event and a research associate at ITMO University’s ChemBio cluster. “Their presentations made up a track dedicated to the properties that can be configured in a system through variation of polymer structures. The rest of the lectures were about practical use. For example, Michael Gelinsky (Dresden University of Technology) talked about bioprinting as applied in space exploration.”

The final lecture was given by Eugenia Kumacheva, research supervisor as part of the megagrant.

“The goal of my presentation at BioPrint was to describe the latest achievements in the field of 3D printing that are related to development of nanoscience and polymeric materials. It’s also important to emphasize the interdisciplinarity of research,” she explains. “In my presentation, I wanted to present new concepts of the development of 3D printing ink and biological applications of new materials. I loved it here. Scientific research takes more time than I thought but considering the epidemiological situation, we are on the right path.”

Due to the pandemic, the lectures were held on Zoom. However, it was possible to listen to them not only at home but also in ITMO University. Both ITMO students and students from other St. Petersburg universities grabbed this opportunity.

“The lectures took place one after another and you could watch them all with no interruption and technical issues. Overall, 109 participants registered for the event,” says Aleksandra Ignatenkova, the workshop’s main organizer and a student of the Faculty of Biotechnologies. “The highest viewer rate online was about 40, plus up to 15 people on-site.”

“The event was very successful and covered many interesting topics, such as ink components, polymers that are able to change their shape, biomaterials for 3D and 4D printing, and medical elastomers,” says Zhihong Nie. “The audience actively participated in the seminar. The workshop turned out to be relevant and fascinating. It allowed students and researchers to exchange ideas and discuss the latest achievements in this field.”

The central piece of the second day was a lab practice for students, during which they could personally apply the technologies described in lectures. About 60 participants gathered for this part that took place at SCAMT.

The practical class was composed of four stages. The first one was dedicated to the theory behind 3D bioprinting. The participants took a test afterwards and students with the highest scores received gifts from the organizers. Then, the students were able to learn more about ink and its properties, including an important one called thixotropy.

“3D printing ink must have thixotropic properties,” explains Sofia Morozova. “It means that under small pressure, it should behave as a solid body, whereas under a lot of it – as a liquid. Such substances are actually very common – for example, even ketchup or mayo are liquid when you pour them, but are more solid if you dip fries in it.”

Then, the students learned how to work with software that created a pattern for biomaterial printing. In conclusion, they could practice either printing a pH-sensitive wound bandage, or a pattern with micro- and nanoarchitecture using fluorescent dye-based ink.

“We wanted to show the students how 3D printing looks in real life. When you do something with your own hands, you learn more,” says Sofia Morozova. “I hope that in the future, this event will become a foundation for a big international conference."