A team of researchers from ITMO University and Australian National University came up with a new concept of photonic topological structures. Localized states of light in such structures appear not due to the intentionally designed lattice geometry but rather because of spatial variation of particles' properties. 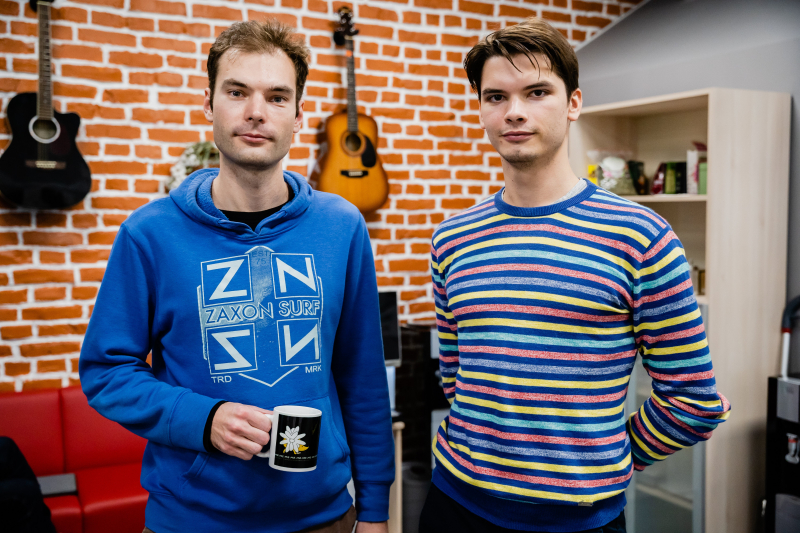 Maxim Gorlach and Daniil Bobylev, authors of the article

At the same time, the properties of localized states can be easily transformed if particles of the structure are flipped over. The obtained results make a step towards topologically protected resonators with a frequency resilient to defects and imperfections of the structure. The research was conducted with the support of the Russian Science Foundation. The article is published in Laser & Photonics Reviews.

Right now, there is a tendency to replace electronic devices with photonic ones. Such photonic structures transmit information with the help of light providing many advantages, such as energy efficiency, compactness, and high operation frequency. One of the promising solutions regarding control of light at the nanoscale is the concept of topological states of light that can propagate without being scattered on defects and can form localized states with a frequency resilient to various imperfections.

To create such states, scientists, as a rule, use structures based on resonant particles arranged in a suitably designed lattice. Symmetry of the grating and interaction between the particles produce edge states at a certain frequency. At the same time, topologically protected states only appear for a relatively small number of lattice geometries.

Such an approach has certain limitations. For example, there is a lack of flexibility when it comes to the control and transformation of the edge states. Moreover, geometrical “recipes” for implementation of topological states gradually exhaust themselves.

A model suggested by scientists from ITMO University and Australian National University is based on the idea of controlling topological properties of a system with the help of spatial variation of the particles’ properties, rather than via choosing a special geometry for the grating. They used resonant particles with broken mirror symmetry as the constituent elements of the structure. This symmetry reduction leads to the effective bianisotropic response when incident electric field induces a magnetic moment in the particle, whereas incident magnetic field causes an electric dipole response.

In the microwave range, the role of such particles can be played by ceramic disks, and their bianisotropic response can be ensured by a non-symmetric notch. By creating a lattice of disk with the different notch orientation, one can achieve the topological edge state. At the same time, lattice geometry stops playing the key role.

“Our idea is to delegate controlling functions from geometry to the particles themselves by enabling a new property. For example, in the case of ceramic disks, we suggest adding notches to them in order to control topological states by turning these disks over with respect to each other. In our article, we have shown that the edge state indeed appears in such structures. Moreover, we can influence the extent of the topological state’s localization by making the notches larger or by rotating the disks. If the disks are made of non-linear material, the non-linear effects will be strongly enhanced due to localization of light,” says Daniil Bobylev, a PhD student at the Faculty of Physics and Engineering at  ITMO University and one of the authors of the article.

This solution not only allows researchers to control topological states of light in a flexible manner, as it offers more freedom, but also opens new ways for designing the topological systems overall.

As of now, the scientists were able to investigate their model theoretically and find edge states in numerical simulation of ceramic disks with notches. Now, they plan to apply a similar approach for two-dimensional lattices and conduct a microwave experiment.

“With the help of full wave simulations, we have proved that our idea can be brought to life. We have applied the multipole expansion technique to optimize a design of resonant elements characterized by a bianisotropic response. We also analyzed electromagnetic topological edge modes in arrays of such particles with staggered bianisotropy and the possibilities to excite them. In the future, we plan to apply our experience to create two-dimensional topological metasurfaces and implement higher-order topological states based on Mie-resonant dielectric structures,” says Daria Smirnova, a research fellow at the Australian National University’s Nonlinear Physics Centre and one of the authors of the article.

Thanks to its high stability and flexibility, the approach suggested by the researchers might turn out to be promising for new 5G technologies and flexible optoelectronic devices. As of now, several international research teams are working on creating basic components of such systems – topological resonators and waveguides.

“In recent years, several research teams from all over the world have been working on creating topological resonators and waveguides based on available and relatively cheap materials that do not require external static fields. Our contribution to development of this field lies in the realization that variation of bianisotropic responses of particles provides new opportunities for the design of topologically protected devices. It’s gratifying to note that our findings have already sparked interest among R&D departments of large companies, such as Bosch and Sony. It stimulates us to continue the research in this field,” says Maxim Gorlach, senior researcher at the Faculty of Physics and Engineering at ITMO University and one of the authors of the article.