For six years, a research team from the Photophysics of Surface Laboratory at ITMO’s International Research and Educational Center for Physics of Nanostructures has been studying plasmonic nanolasers – a long-standing subject of debate in the scientific community. The study was conducted as part of a Russian Presidential Grant. 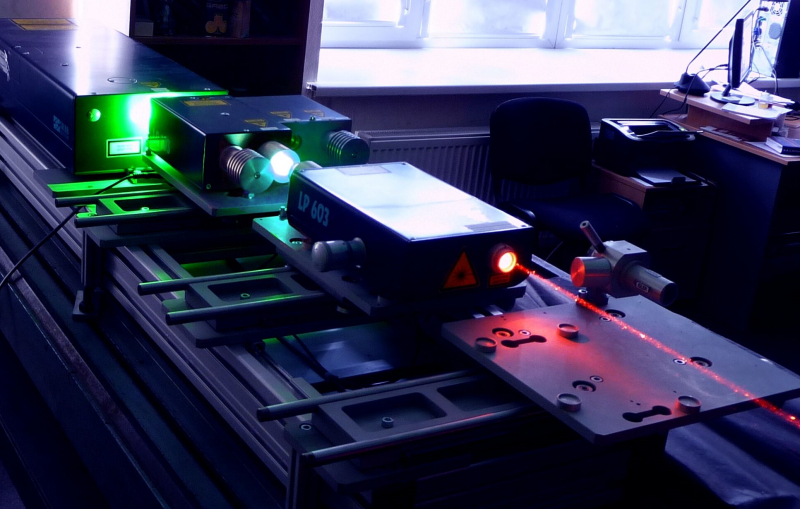 A paper on the subject of this research was published in the first issue of Advanced Photonics Research, a new journal of the reputable publisher Wiley, which also distributes Laser & Photonics Reviews, Advanced Optical Materials, Advanced Science, and many other high-impact publications.

The distinctive feature of these lasers lies in their size, which is much smaller than the wavelength of the emissions they generate. In 2003, the theoretical emergence of such devices was predicted by Mark Stockman from Georgia State University and David Bergman from Tel Aviv University. Back then, the devices were referred to as spasers (short for “surface plasmon lasers”). And the first experimental evidence came from Mikhail Noginov’s research team at Norfolk State University, whose research was published in Nature.

However, the scientific community is still in dispute over the possible existence of plasmonic nanolasers.

“Mikhail Noginov proved that energy generation in nanoparticles can be achieved by submerging them in colloidal dye solutions, which activates the surface plasmons. The researchers created a 44-nanometer laser that emitted light with a wavelength of more than 500 nanometers. But the new invention fueled criticism, partially because scientists believed that this generation of energy was a result of the effect of multiple scattering of emissions on particles and their agglomerates in an active medium – a well-studied effect used in random lasers. However, as plasmons are not involved, no special device can be invented,” says Nikita Toropov, head of the team and a researcher at the International Research and Educational Center for Physics of Nanostructures.

Plasmons are quantums of collective electron oscillations in metals stimulated by beams of light or electrons. Basically, it is a collective phased oscillation of electrons that occurs in nanoparticles (in particular, colloidal silver solutions) under the effect of an exciting emission.

This model is speculative yet prevalent as it provides a good explanation of the process. In fact, it produces the same effect as conventional photonic lasers, only in miniature.

“We found Noginov’s findings convincing and it encouraged us to work further on the topic. First, we simplified the experiment: replaced a bulk colloidal solution used for random lasers with a substrate with suppressed multiple scattering. On top of the substrate, we developed nanoparticles, added a thin film of dye, achieved the generation of energy, and then studied its properties to prove that it is indeed laser generation,” continues Nikita Toropov.

The first sign of lasing is a narrow emission band in the luminescence spectra of dye molecules, amplified by the nanoparticles. But it was not enough, so the next step was to demonstrate that the generated emission has different characteristics than the amplified luminescence: it is more ordered, coherent, its energy nonlinearly depends on the pump energy, and it has a preferred direction. The final proof was that the emission was linearly polarized.

“If you take a thin film of dye molecules and study its fluorescence, you will find that it is not polarized. If this film contains nanoparticles that generate stimulated emission, then this emission possesses a clear linear polarization. This can’t be interpreted in any other way,” explains Nikita Toropov.

Work on the project began in 2014, when one of the authors, ‪Aisylu Kamalieva, enrolled in ITMO’s international Master’s program Physics and Technology of Nanostructures and started working at the Photophysics of Surface Laboratory under the supervision of Nikita Toropov and Tigran Vartanyan, a professor at the Faculty of Photonics and Optical Information.

Six years have passed since then, but a full-fledged article appeared only now. The reason is that the scientists wanted to collect as much irrefutable evidence as possible. However, interim results of the study had been presented at various international conferences, for instance, at SPIE Photonics Europe 2016 and Nanophotonics and Micro/Nano Optics 2018, where the scientists had the chance to meet Mikhail Noginov and Mark Stockman, the authors of the concept of plasmonic nanolasers.

The research was highly appreciated by the scientific community and in 2019 the scientists received a Presidential Grant of the President of the Russian Federation to go towards the completion of their experiments.

The article was originally submitted to Laser & Photonics Reviews, but the editors suggested publishing it in the new journal Advanced Photonics Research. Importantly, the journal has a wider audience as it is in open access. This increases the chance of citation, as well as potential collaborations with other scientists. The fact that the journal is new and has no impact-factor yet does not scare the authors.

“When Nature launched new journals, they also did not have any impact factor at first. But after a couple of years, their impact factor skyrocketed. We believe that Advanced Photonics Research will soon become one of the leaders in photonic technologies. The editorial board consists of many influential scientists, including ITMO University's Sergey Makarov,” notes Anton Starovoytov, one of the authors and an associate professor at the Faculty of Photonics and Optical Information.

From the very beginning, the researchers focused more on solving problems of fundamental science rather than seeking practical applications for the device. It was important to demonstrate the very possibility of the existence of such devices to prove that a particle of several tens of nanometers in size can indeed generate emission with a wavelength of hundreds of nanometers, as well as to investigate the physical processes behind this phenomenon.

However, plasmonic nanolasers have great potential for practical applications. They can be used to create a new class of miniature devices – namely, as optical data processing elements in flexible electronics. Scientists are also interested in using nanolasers in biomedicine, for example, in photodynamic therapy for cancer, diagnostics, and as sensors for bioanalysis.