Scientists from Russia and Denmark firstly demonstrated a tunable metasurface based on the most common substance on the Earth — water. Artificially produced materials, called metasurfaces, manipulate microwaves and are known for long. Currently the researchers show that water based metasurface may perform like metal or silicon ones, being at the same time extremely cheap and tunable right in the operation process. The scientists studied properties of the metasurface just in that frequency range, which is the same as modern gadgets have, and suggested that it can be used to block mobile signals. The study was published in Applied Physics Letters. 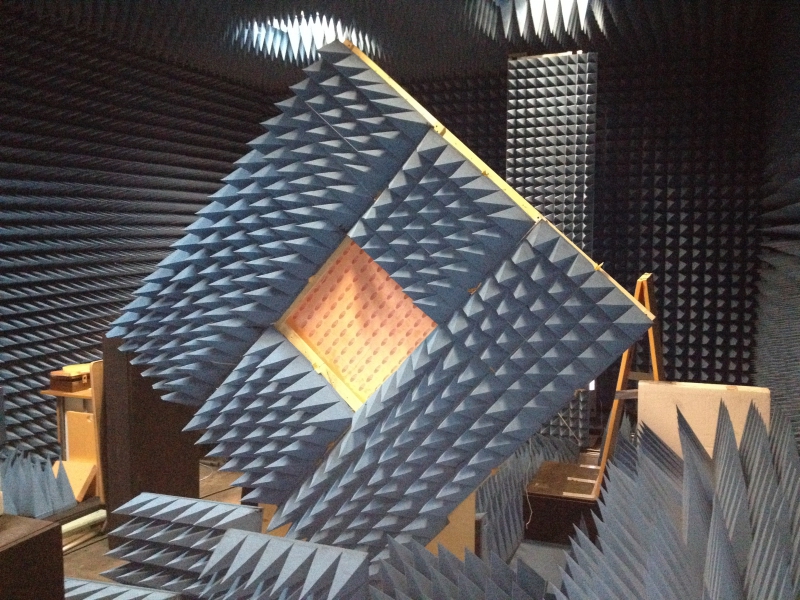 Metamaterials are the man-made mediums with periodic structure. Then metasurface can be represented as a single layer of metamaterial, i.e. as a lattice of artificial atoms called meta-atoms. Usually, meta-atoms are made of metals and ceramics, but it turned out that can be used for this purpose too.

The scientists from ITMO University, and Technical University of Denmark firstly demonstrated a metasurface composed of cells with water as meta-atoms. These cells have asymmetrical oval shape and are half-filled with water. Therefore, when the surface tilts, the water flows, the shape of meta-atoms changes and they begin to resonate with the electromagnetic wave by another way.

Speaking simpler, the water fluidity allows to change metasurface properties by its rotation. "The incident wave is partially transmitted, partially reflected, partially absorbed. Redistributing water inside the cells, we change the balance between transmission, reflection and absorption. This determines where the metasurface can be applied: for polarizers, filters, or selective absorbers," notes Andrei Andryieuski, research fellow of the Department of Photonics Engineering at Technical University of Denmark, author of the concept of using water as meta-atoms.

Thus, a significant area of the walls can be covered with water based metasurface to isolate a room from radio signals, as for data protection, as during exams. "Mobile GSM phones operate at frequencies of 0.9 GHz and 1.8 GHz. It is directly in the range, in which we conducted the research," continues Andrei Andryieuski. "The results show that using water metasurfaces, we can create effective barriers to absorb radio waves." The metasurface resembles a tablet blister, except that the cells are covered with transparent plastic film, as opposed to metallic foil, and filled with water instead of tablets. The shell should support water and be transparent to microwaves, so the researchers cut the cells in polystyrene. This material is very cheap and affordable as water; it is easily processed and has low dielectric permittivity. On the contrary, water has the high dielectric permittivity, even higher than ceramics. As it’s known, the more dielectric permittivity of the medium is, the worse electromagnetic waves pass through it.

Water based metasurface can cope with waves at higher frequencies (and with shorter wavelengths, respectively): in order to block 4G or Wi-Fi, for instance, one needs to reduce the size of water cells. In other words, the cell size is proportional to the wavelength, for which cells are intended. In addition, the dielectric permittivity of water depends on temperature, so the operating frequency of metasurface can be changed through warming and cooling the water in cells. Moreover, putting water into elastic shell, it is possible to compress and stretch the meta-atoms that will also affect the properties of the whole metasurface. These effects also give water advantages over ceramics and metals.

It is easy to fabricate the water based metasurface and also understand how it works. That is why the scientists recommend to use this for educational purposes. Students and schoolers can produce similar hand-made construction of improvised things like balloons or plastic bags and check how it works on their own gadgets.

The elliptic shape of the cells was chosen deliberately. "Circle is the simplest shape, and we broke its symmetry to vary the form of meta-atoms by rotation," tells Mikhail Odit, the first author of the paper, researcher of the Department of Nanophotonics and Metamaterials at ITMO University. "The cell shape can be various: it is possible to make angular L-cells, T-cells, to combine them, as they look like twisted mazes. This is just the next step of our work." However, water has one disadvantage: electromagnetic waves fade fast passing through it. According to the scientists, it can be reduced with the use of purified water. "Previously, water seemed to be useless in radiotechnics due to its large losses, but we suppose that they can be reduced. For the experiments, we applied distilled water that could hold up to 70% of the radiation. To enhance efficiency of the metasurface, we should use deionized water," comments Mikhail Odit.

Any cell filled with a liquid is a resonator. Whether meta-atom comes into resonance with a wave or not, depends on its size, shape and substance inside. Searching for the right substance, the scientists measured the dielectric permittivity of different liquids including acetone and even Coca-Cola. But they opted for water.

The concept of using water as meta-atoms was firstly proposed by staff of Technical University of Denmark Andrei Andryieuski and Andrei Lavrinenko in 2015. Now the scientists managed to put this idea ito practice due to a special microwave laboratory at ITMO University. Established in 2010, the lab is unique, because only private enterprises usually work with electromagnetic waves. The pride of the laboratory is an anechoic chamber. This room is 25 square meters in size with the inner surface covered with foam needles like in a recording studio. Only in such a specialized camera, one can work with microwaves at a high level, as it does not transmit external signals and does not allow the internal ones to re-reflect from the walls and to affect experiments.